Sling TV is one of the oldest and most popular streaming services in the United States. It offers three types of subscriptions and a variety of add-on channels, so you can customize your subscription to get the channels you want.

However, with so many options available, it can be difficult to decide which plan is right for you. That's why we're listing down all the channels that are included in Sling TV's subscriptions. Whether you're looking for entertainment, news, or sports channels, you'll be able to find the right plan for you.

Sling TV offers 3 kinds of subscriptions: Sling Blue, Sling Orange, and Sling Orange + Blue. Each package comes with different channels and support for streaming devices, so you can choose which one is the best fit for you. Below, we’ll break down each subscription’s features and included channels.

Standard Channels in All Sling Plans

Remember how we used to flip the channels looking for something interesting to watch? Well, you can do that again with any of these plans. Here, you’ll have access to a myriad of channels, from children’s shows, sports channels, the news to nature documentaries and more.

Regardless of what subscription you get, you can expect to have these channels as part of your plan.

Apart from all the channels listed above, you get even more news and entertainment channels with this plan. If you gravitate towards these kinds of channels more, then Sling Blue is the plan for you.

The Sling blue plan also features 3-device streaming, so 3 users on different devices can stream simultaneously. And if you want to record shows to watch for later, the Sling Blue plan also comes with a 50 hours free DVR. Sling TV’s Blue plan goes for a monthly rate of $30.

When it comes to Sling Orange, this plan is a good choice for sports enthusiasts. It still has channels on news and entertainment as well. Although, it features a lot more sports channels compared to Sling Blue.

If you like Disney’s Channels and sports channels such as ESPN, ESPN2, and ESPN3, these are also available on the Sling Orange plan. However, unlike Sling Blue, this plan only features 1-device streaming. The Sling Orange plan also comes with 50 hours of free DVR, so you can also record shows to watch for later.

If you can’t decide which plan suits you best, you don’t have to. The Sling Orange + Blue plan provides you with all the channels. Whether it’s news, entertainment, or sports, you’re free to choose whichever with this plan. And just like the 2 previous plans, you also get 50 hours of DVR.

Take note, however, that certain channels have features exclusive to either Sling Blue or Sling Orange. Some Sling Orange channels only support 1 device streaming. Even if you avail of the Sling Orange + Blue, if the channel is under Sling Orange, it will still fall under the single-device limit.

When it comes to live streams, sometimes your schedule doesn’t always align with a program's stream time. Luckily, Sling TV features DVR so you can watch your shows when you can and when you want to. All Sling TV plans come free with 50 hours of DVR, but for $5 a month, you can record up to 200 hours.

If you’re looking for something a little extra to add to your plan, you can choose from a selection of additional channels like:

Sling TV offers also offer international channels from across the globe, so you can get your fix of diverse entertainment.

Cutting the Cord with Cable

If you haven’t cut the cord on your cable subscription yet, then get ready to with Sling TV. Whether it’s blue, orange, or a combination of the two, Sling TV has a plan that’s right for you. Add in an antenna for your local channels and you should be completely off the cord. And if you’re looking for more, you can always add on channels for a more tailored plan that meets your needs. 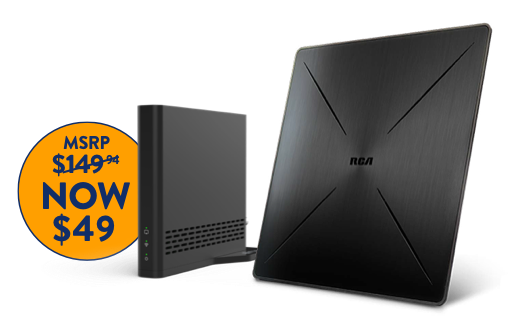 Go for live stream channels, or record it for later, you decide how you watch. Watch anything you want online with Sling TV’s plans and other additional channels.