With more than 520,000 active students and nearly 6 million living alumni, the Big Ten Conference is one of the most-watched college sports conferences in the country. And all those Big Ten cord-cutters will be happy to know they can watch Big Ten Network live without cable.

Fortunately, you’ve got a few options when it comes to streaming Big Ten Network, including Sling TV, fuboTV and Hulu + Live TV. You can also watch it with DirecTV Stream and its slate of regional sports networks (RSNs), Vidgo and YouTube TV. So, before it expands to 16 teams, let’s take a deeper look into the ways you can stream Big Ten Network in 2022.

What is Big Ten Network?

Considered one of the “Power Five” conferences, the Big Ten Conference is the oldest Division I conference in American college sports. It started in the Midwest, then expanded to the Atlantic, and will soon reach the Pacific when USC and UCLA join the conference in 2024.

Three of the top 5 most-watched college football programs in the country – Ohio State, Michigan, and Penn state – are Big Ten schools. Combined, those 3 schools get nearly 14 million viewers per week during the season, while the whole conference gets over 30 million.

To serve these viewers, the Big Ten Network was created in 2007 as a joint venture between the Big Ten and Fox Sports. It broadcasts live games, recorded events, commentary and analysis, and other programs related to the schools in the conference.

Previously only available through cable and satellite providers, Big Ten Network announced in 2017 that it would be available on Hulu + Live TV and YouTube TV. Five years later, cord-cutters have many more options to watch it.

If you’re looking to stream Big Ten Network without breaking the bank, Sling TV is your best bet. 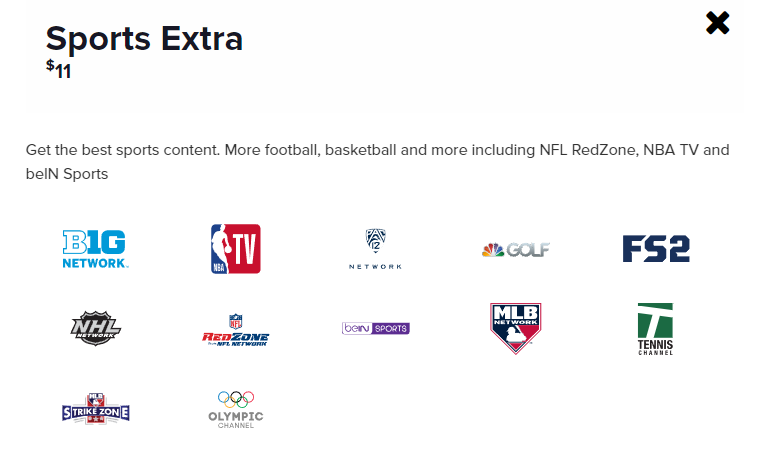 For a total of $46/month, that’s the lowest price you’ll find to stream Big Ten Network.

The other option is to get Sling Orange & Blue for $50/month, which gets you all the channels in both plans. The Orange & Blue Sports Extra add-on costs $15/month and has 19 sports channels. But at $65/month, you’re into the price range where you can get more from another service.

Both plans come with 50 hours of cloud DVR storage and let you stream on up to 3 devices at once.

Positioning itself as the industry’s go-to streamer for sports, fuboTV has 3 plans from $70 to $100 per month. Fortunately, the cheapest plan gets you Big Ten Network – no add-on needed. 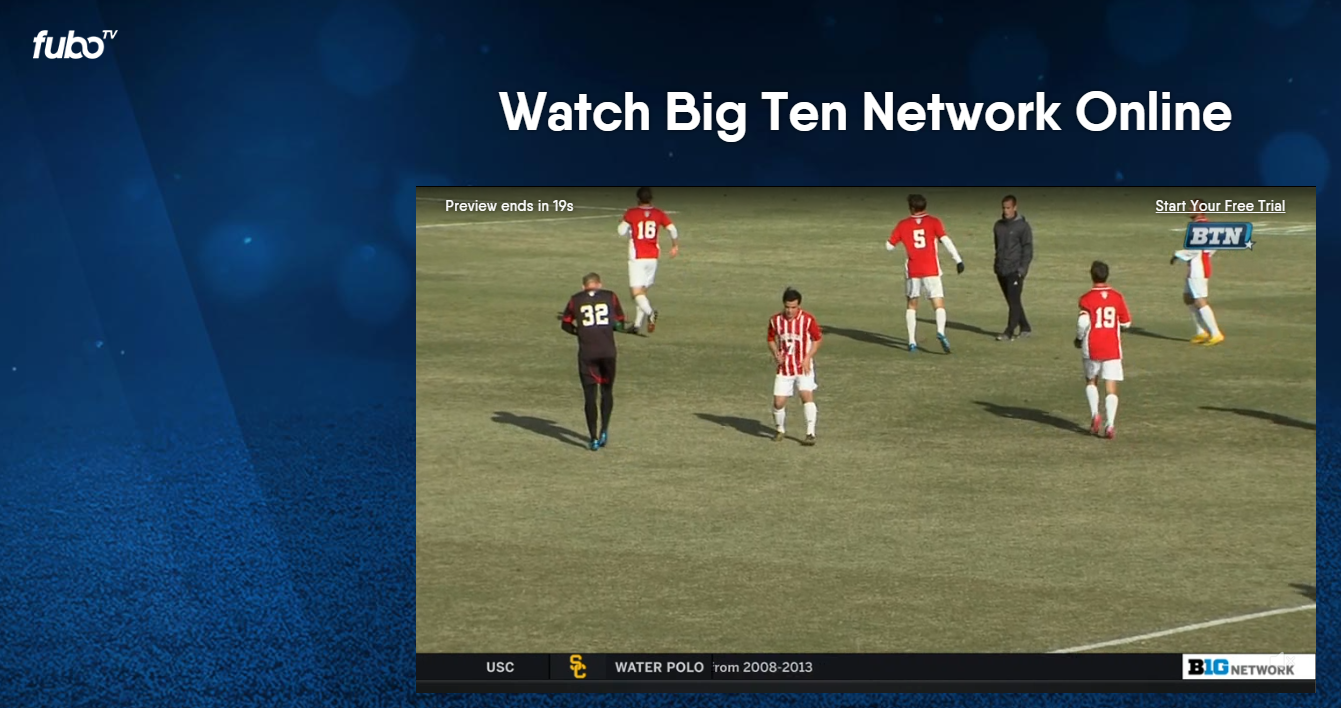 For starters, all fuboTV plans include the Big 4 broadcast networks – ABC, CBS, FOX, NBC – as well as Telemundo and Univision.

For $69.99/month, the fuboTV Pro plan comes with 130 channels, including Big Ten Network, as well as ESPN/ESPN2, FS1/FS2, and CBS Sports Network. You also get the NFL Network and a few NBC Sports RSNs in select markets.

That’s only $5/month more than you’ll pay to get Big Ten Network with Sling TV, but you get all the major TV networks and about 90 more channels.

If you want more college sports, the Elite plan ($79.99/month) includes ESPNU, ACC Network and Pac-12 Network with its 185 channels, while Ultimate adds SEC Network and even more Pac-12 channels for $99.99/month.

FuboTV has on-demand entertainment, including full TV series, although there are better options to consider if that’s a key deciding factor.

Every fuboTV plan includes 1,000 hours of cloud DVR and lets you watch up to 10 screens at once on your home network.

If you’re looking for a good mix of movies and original TV shows to go with your college sports, Hulu + Live TV is worth consideration.

Hulu + Live TV has the 4 major broadcast networks as well as TBS. In addition to Big Ten Network, it includes ACC Network and SEC Network, meaning you’ve got 3 of the Power Five conferences covered. You also get ESPN, FS1 and ESPN+, as well as 5 RSNs from NBC Sports and SportsNet NY.

For non-sports content, Hulu’s on-demand library is one of the best out there, with award-winning original shows and movies. And even better, Disney+ is included.

Both plans come with unlimited cloud DVR, but a rather stingy 2 simultaneous streams. However, that can be upgraded to unlimited screens for $9.99/month.

DirecTV Stream boasts more RSNs than any other streaming service, but it’s also currently the most expensive way to watch Big Ten Networks without cable.

DirecTV Stream offers 4 plans to choose from ranging in price from $70 to $150 per month. However, you’ll need at least the second-tier choice Plan to watch Big Ten Network on DirecTV Stream. It has 90+ channels – including the 4 Big TV networks, as well as TBS, TNT and PBS – and costs $89.99/month.

The Choice plan is also when you get access to DirecTV Stream’s industry-leading selection of RSNs, including Bally Sports. You also get more college sports with ACC Network, SEC Network and ESPNU.

The Choice plan includes a massive library of 45,000 on-demand shows and movies. All DirecTV Stream plans let you watch up to 20 screens at home and give you unlimited cloud DVR storage.

Fortunately, Big Ten Network is in the Plus plan’s channel lineup, which includes ACC Network, SEC Network and 7 Pac-12 regional channels. And in addition to ESPN and FS1, you also get premium sports channels like MLB Network, NFL Network and NHL Network.

If you need a break from sports, Vidogo has 14,000 titles in its on-demand library.

Vidgo is $10/month less than Hulu + Live TV and fuboTV, but those savings come with some downsides. There’s no cloud DVR with the Plus plan (and it’s in a beta stage with Premium), and Vidgo only carries 2 of the major broadcast networks – ABC and FOX.

For an all-around cable replacement, YouTube TV is one of your best bets and is even five bucks cheaper than its closest competitors, Hulu + Live TV and fuboTV. 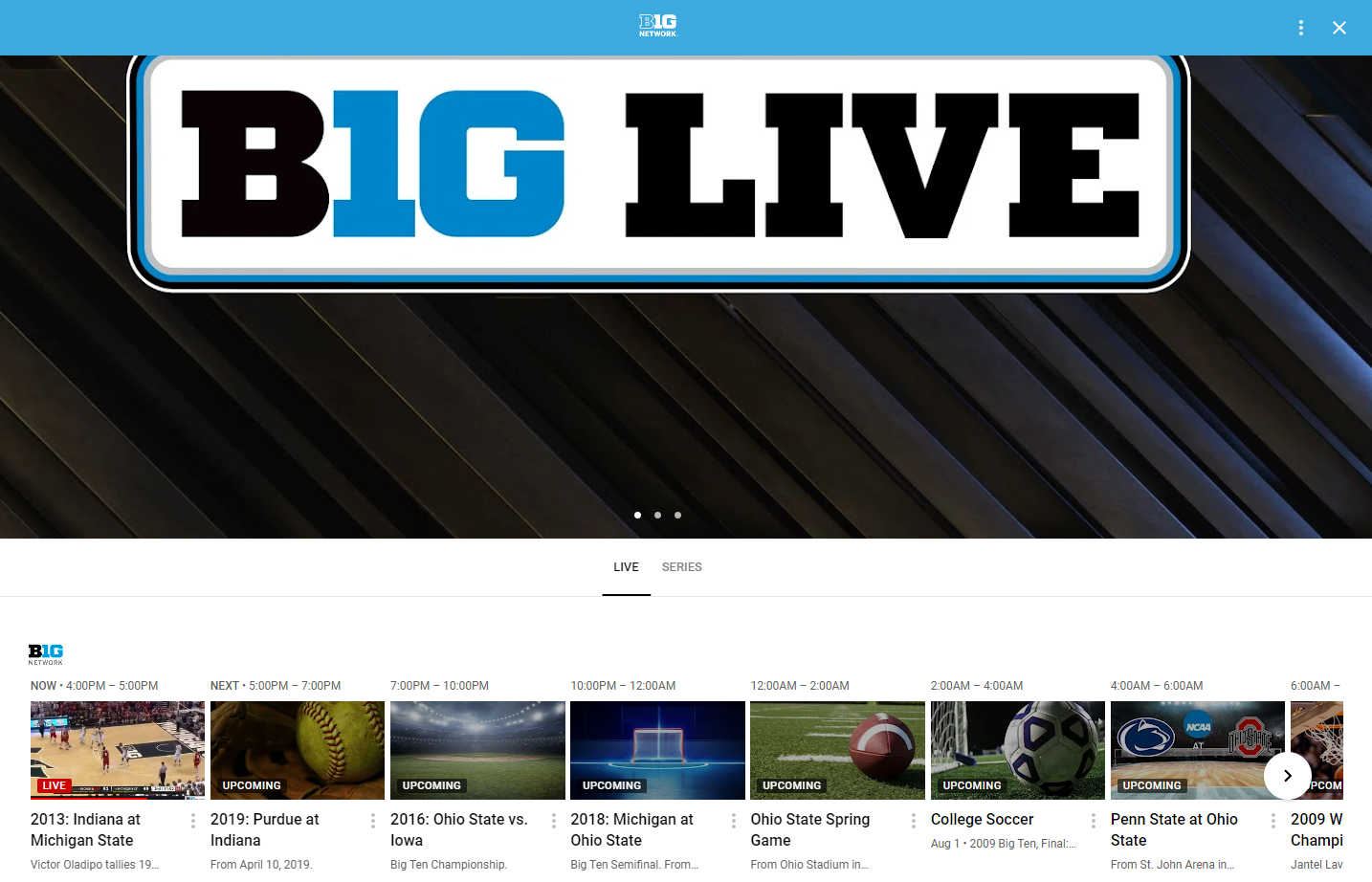 YouTube TV carries all the major TV broadcast networks plus The CW and PBS, as well as Telemundo and Univision. There are also on-demand movies and TV shows, but they’re not in a library you can browse through.

Unlimited cloud DVR comes standard along with 3 simultaneous streams, which can be upgraded to unlimited screens with the 4K Plus plan for $19.99/month.

Which streaming service is best for watching Big Ten Network?

It comes down to whether your decision is based on price, extra sports, or on-demand entertainment. But to help you decide, here’s a quick recap of how much they cost each month: