It will probably come as a shock to anyone who’s not a fan, but with 2.5 billion followers, cricket is the world’s second-most popular sport after soccer. And while not as popular as America’s favourite pastime, cricket’s been played in the country longer than baseball. With the sport now gaining in popularity, we look at 3 ways to watch cricket live without cable in 2022.

Cricket is similar to baseball in that it’s played with a ball and bat, and teams alternate between batting and fielding. It’s most popular in Commonwealth nations, such as India, Australia and Jamaica, which compete in the Indian Premier League, Big Bash League and Caribbean Premier League, respectively.

Cricket is still not widely broadcast in the US and you won’t find it some of the best streaming services for sports – like fuboTV or DirecTV Stream – but you can watch it on Sling TV, ESPN+ and through Willow TV’s own website.

How to watch cricket on Sling TV

There are 2 main plans available on Sling TV – Sling Orange with 31 channels, and Sling Blue with 41 channels. The Orange & Blue plan includes all Sling TV channels at a considerable discount.

But Sling TV’s best offering for cricket fans is a bundle with Willow TV, an American pay-TV channel dedicated to overseas cricket. The bundles – Willow Cricket, Desi Binge Plus, World Sports Mini and South Plus – range in price from $5-15 per month.

And remarkably, they don’t require a base plan.

Sling TV lets you watch up to 3 simultaneous screens but you only get 50 hours of cloud DVR.

How to watch cricket live on ESPN+

ESPN launched its own streaming service in 2018. ESPN+ is a separate service that doesn’t air the live ESPN channels – and even has its own broadcasting deals.

ESPN+ broadcasts every match of the Indian Premier League live (in English and Hindi), as well as hundreds of matches featuring big-name teams like New Zealand Cricket. And last year, ESPN+ locked in the US broadcast rights for every ICC Future Tours Programme match played in the Caribbean.

ESPN+ can be subscribed to on its own, but it’s also part of Hulu’s Disney Bundle, which includes Hulu, Disney+ and ESPN+, for $13.99/month. And if you’re in the market for a live-TV service, Hulu + Live TV includes the Disney Bundle at no extra fee.

You can watch 3 simultaneous streams and, while there is no cloud DVR, everything shown on ESPN+ goes directly into its on-demand library shortly after aring.

How to watch cricket live on Willow TV 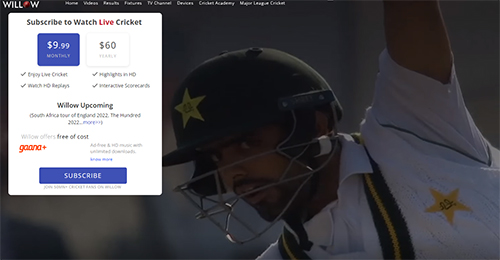 If you’ve already got a streaming service and just looking to add cricket – and only cricket – you can sign up to Willow TV directly on its website. It costs $9.99/month or $60 for the year. It gives you access to live games, highlights, and full replays of every match.

If your cable subscription includes Willow TV, you can use your account to log in to the service for free. But unlike other similar websites – like USA Network, for example – you can’t use your Sling TV credentials to sign in.

Willow TV also has dedicated apps for an impressive range of devices. You can watch Willow TV on all of the following:

With the Major League Cricket – a 6-team professional Twenty20 cricket league – set to begin play next year, cricket it taking a second shot at professional sports in America. And as cricket becomes more popular in America, expect more streaming services to start offering cricket. But for the moment, you’ll need to choose one of the above 3 options to watch cricket live in 2022.