If you want a streaming service that’s a complete cable TV replacement, you’re probably weighing DirecTV Stream vs YouTube TV. And if you’re not, you should be. They’re 2 of the most robust live TV streaming services on the market today.

There are cheaper options out there, like Sling TV and Philo, or more sports-oriented streamers like fuboTV and Vidgo. But other than Hulu + Live TV, DirecTV Stream and YouTube TV have the most cable-like offerings.

A quick overview of both streaming services

DirecTV has been delivering TV shows, movies, and sports over satellite since 1994. And 2 years ago it launched its streaming TV counterpart, now called DirecTV Stream. With 4 plans ranging from $70 – $150/month, it’s the most expensive streaming service out there. However, it offers the most regional sports networks (RSNs) in the industry, all major broadcast networks, and many industry-leading features. It also includes premium channels like Starz and HBO in its higher-tier plans.

Taking a different approach, YouTube TV has a single English-language plan for $65/month. A few channel bundles are available, but most channels are added à la carte. The base plan includes all the major broadcast networks and many free-to-air and cable channels, such as Disney Channel, ESPN, and Paramount Network.

YouTube TV’s single English-language plan is $5/month cheaper than DirecTV Stream’s entry-level tier. Its $64.99/month base plan is also cheaper than Hulu + Live TV ($69.99), and its 85+ channels is more than either service. 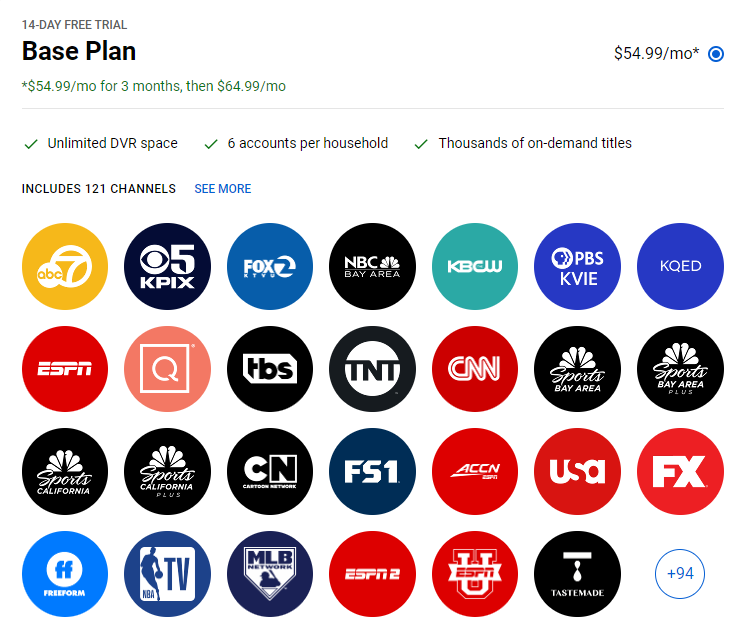 DirecTV Stream’s 65-channel Entertainment plan costs more than YouTube TV and has 20 fewer channels. Although, the on-demand library is much larger than YouTube TV.

The Choice plan ($89.99/month) includes 90+ channels. This is where DirecTV Stream starts to show value for sports fans, as all of the RSNs become available.

The Ultimate plan offers 130+ channels for $104.99/month, and includes channels like CBS Sports Network, Starz Encore, and FXM. While for $149.99/month, the top-tier Premier plan has 140+ channels, including premium content like HBO Max, Cinemax, and Showtime.

YouTube TV has a longer free trial than DirecTV Stream

Free trials in the streaming world ebb and flow, so it’s always best to double check each service’s website. With that said, YouTube TV’s free trial is currently 14 days, which is one of the best in the industry. It’s usually only 7 days, but that’s still longer than DirecTV Stream’s 5-day free trial.

DirecTV Stream got rid of its free trial earlier this year, but now it’s back. It’s currently 5 days, but you can cancel your subscription for any reason within 14 days of purchase and get a full refund. You can also get the following premium channels free for 3 months when signing up for DirecTV Stream:

Nearly all free trials require you to enter your payment information. Cancelling during your free trial cuts off access immediately to YouTube TV, but you can keep watching DirecTV Stream until the end of the trial period.

At its highest tier, the Premier plan has 140+ base channels, but many markets get far more than that. It also has popular channels you can’t get on YouTube TV, like A&E, History Channel and Tennis Channel.

What is (and isn’t ) on DirecTV Stream

Lower-priced streaming services cut corners on local channels, but DirecTV Stream has the all the major broadcast networks:

There are 2 Spanish-language add-on packages, as well as add-on bundles for Brazilian, Korean and Vietnamese programming.

DirecTV Stream is the only streaming service with Bally Sports, YES Network and Spectrum SportsNet. It also has MSG and select markets for AT&T SportsNet and NBC Sports.

The key omission that sports fans need to be aware of is NFL Network. It’s not even available as an add-on.

YouTube TV has all the same broadcast networks as DirecTV Stream, including PBS. However, YouTube TV’s Base Plan includes Telemundo – as well as UniMás and Univision – without the need for an add-on or the Spanish Plan.

To recap the key content differences, these are a few popular channels that are only available on one of these services:

DirecTV Stream has a better on-demand library than YouTube TV

DirecTV Stream’s Entertainment plan has 40,000+ on-demand titles, while the Premier plan increases that to over 65,000 titles. And it's all easily navigable from the main menu’s On Demand tab.

YouTube TV doesn’t have a dedicated on-demand library, so finding its on-demand content requires a lot of clicking or searching. Even the rudimentary browse section can lead to “upcoming” movies instead of video-on-demand.

While some services, like Hulu + Live TV, charge extra for unlimited DVR, it’s a standard feature with both DirecTV Stream and YouTube TV. Also, both services keep your recordings for 9 months.

Only YouTube TV lets you download content to watch offline, but it requires the 4K Plus add-on for an extra $19.99/month. That bumps your total cost up to $84.98/month, but it’s still 5 bucks cheaper than DirecTV Stream’s Choice plan.

Except for one proprietary device, you can watch YouTube TV on everything that DirecTV Stream supports and more.

DirecTV Stream is better for home theaters than YouTube TV

The one device not supported by YouTube TV is the DirecTV Stream Device. For an extra $5/month, the dedicated streaming device delivers content in Ultra HD 4K, HDR10, and Dolby Atmos 5.1 surround sound. It also gives you access to thousands of apps and enables voice remote.

Without add-ons, DirecTV Stream beats YouTube TV 20 streams to 3. Whether anyone needs more than 20 streams is questionable, but YouTube TV’s 4K Plus add-on boosts you up to unlimited streams.

And the winner is…

Unless you’re looking for Bally Sports or other RSNs only available on DirecTV Stream, YouTube TV is the better choice. It costs less, supports more devices, and has all the major broadcast networks. And nearly every premium channel you can think of is available as an add-on.