One of the main things keeping people handcuffed to their cable TV subscriptions is live sports. They’re afraid they won’t be able to watch their favorite team without it. The good news is, they can. Which means you can too. And even though the Major League Baseball season is already underway, you can still cut the cord without missing any games. Keep reading for the best ways to watch the MLB 2022 Season without cable.

There are many ways to watch MLB online, including Sling TV, fuboTV, Hulu + Live TV, DirecTV Stream, Vidgo, ESPN+, and YouTube TV. Deciding which is best for you is what we aim to help you with below.

Where to Watch Major League Baseball

From regional blackouts to national exclusives to Friday night-only, the live broadcasting rights for Major League Baseball games are about as complex as it gets.

For starters, every team has a local contract to televise its games, meaning you’ll need the regional sports network (RSN) for your area. Most of those contracts are with Sinclair Broadcasting Group and aired through its Bally Sports Network – which you’ll only find on DirecTV Stream. However, some teams can be found on NBC Sports or other RSNs, so it all depends on who your team is and where you live.

Then there are the national games. Those broadcasting rights are divvied up among a small, yet varied group. They include Major League Baseball’s own MLB.tv and MLB Network, as well as the following:

Before getting to the main streaming options, there are a few limited services worth mentioning.

MLB.tv is great for hardcore baseball fans and costs $114.99 for the season. But while it has live broadcasts of every game in the league, those games are subject to local blackouts. The national broadcasts by the license holders mentioned above are also subject to blackouts. However, if you don’t mind watching on a slight delay, the games become available on-demand about 2 hours after the bottom of the ninth.

MLB.tv also has a “Free Game of the Day” available to stream.

MLB on Apple TV+ and Peacock

This season marks Apple’s entry into broadcasting baseball and it’s doing so with an exclusive weekly doubleheader on Apple TV+ called Fright Night Baseball. Meanwhile, at the other end of the weekend, Peacock has 18 exclusive Sunday morning games on MLB Sunday Leadoff.

Apple made the first 12 weeks of Friday Night Baseball free, so you can watch without a subscription until June 24. After that, it’ll cost $4.99/month, which is what a Peacock subscription costs as well. (Peacock has a free option, but you need the Peacock Premium plan to watch MLB.)

YouTube also has 15 exclusive “Games of the Week” available for free on YouTube (not YouTube TV). For the rest of the week’s games, you need to look elsewhere.

If you’re looking for the lowest-priced way to watch MLB games live, look no further than Sling TV. It has 2 plans, Sling Orange and Sling Blue, and they both include TBS for $35/month. However, Orange has ESPN while Blue has Fox, FS1 and NBC (in select markets). Naturally, Sling offers a plan that includes all the channels, imaginatively called Orange & Blue, for $50/month.

Tack on another $11/month for the Sports Extra add-on to get MLB Network – as well as other premium sports channels like NBA TV and NHL Network – and you’re looking at $61/month. But that’s still going to be one of the best prices you’ll find.

All Sling TV plans come with a standard 50-hour cloud DVR and allow up to 3 streams. It’s important to note that channels only on the Orange plan (meaning ESPN) are limited to a single stream.

Watch the MLB 2022 Season on fuboTV 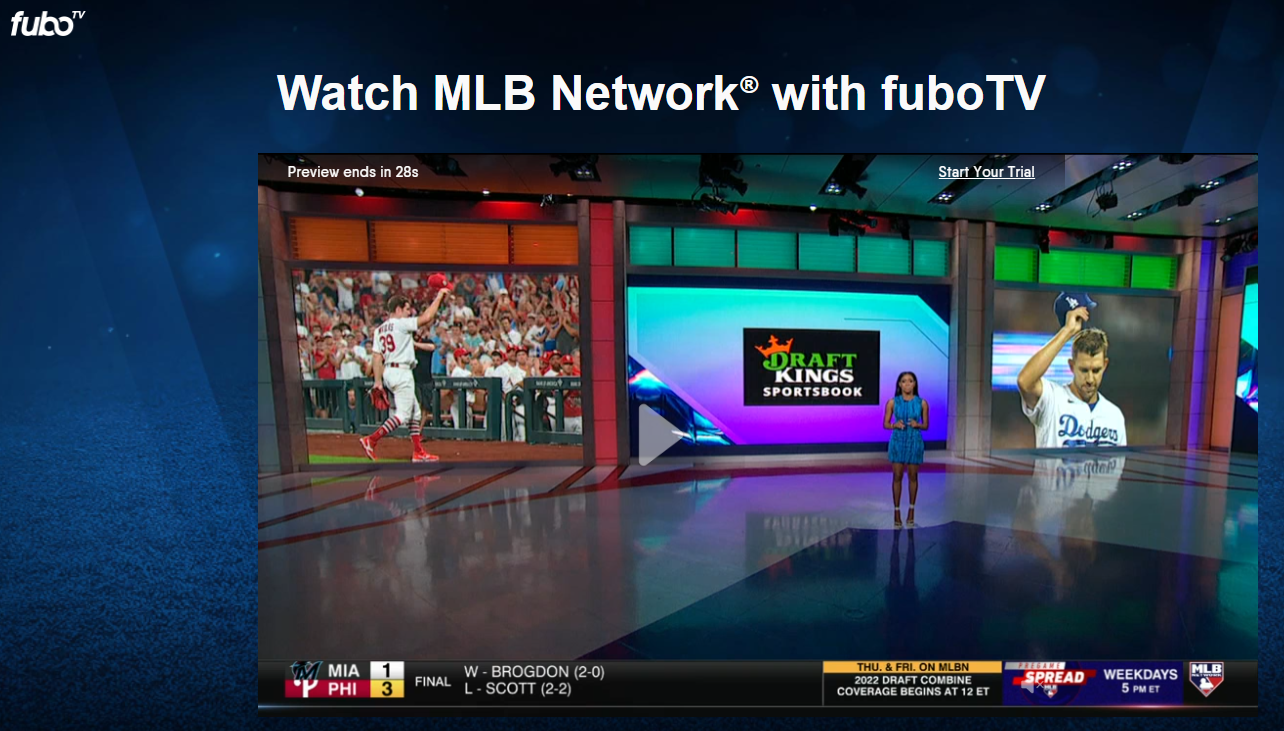 FuboTV’s mission is to be the go-to streamer for sports. It’s got 3 plans ranging in price from $70 to $100 per month, and they all include ESPN, FOX, FS1 and NBC. That means you’ll only need the entry-level Pro plan at $69.99/month.

The Pro plan also includes 13 RSNs, including select AT&T SportsNet and NBC Sports channels, so check to see if your city is covered.

You have a choice of 3 channel bundles that include MLB Network. The Sports Plus with NFL RedZone for $10.99/month also includes MLB Strike Zone, NHL Network, NBA TV and a whole lot more. But if you’re only looking for MLB Network, fubo Extra for $7.99/month is your best bet.

That means you can get almost all your baseball needs for $77.98/month. The only thing missing is TBS.

All fuboTV plans come with 1,000 hours of cloud DVR space and allow 10 simultaneous streams on your home network.

If you’re also in the market for a full cable replacement, Hulu + Live TV offers 85+ channels that might satisfy your needs. It’s $69.99/month (or $75.99/month to remove ads from the on-demand library), and includes ESPN, FOX, FS1, NBC and TBS. You also get ESPN+, which airs one national MLB game daily. However, you won’t find MLB Network – not even as an add-on.

You get unlimited cloud DVR and 2 simultaneous streams, upgradable to unlimited screens at home plus 3 on the go for an extra $9.99/month. 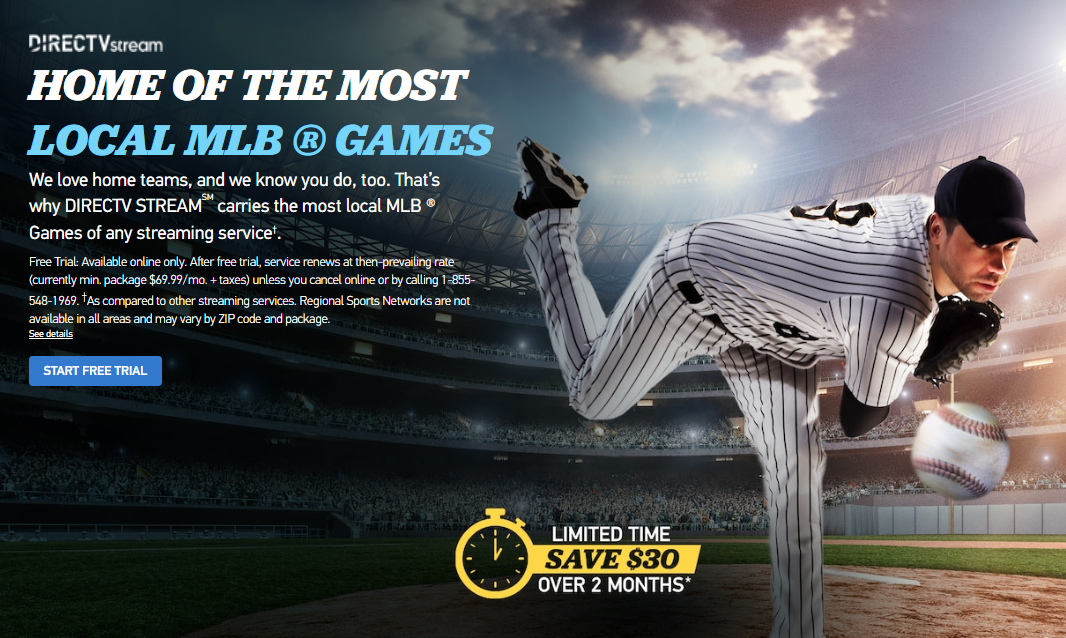 DirecTV Stream claims to air more local MLB games than any other platform. And rightly so. It's got the RSN for every MLB team except the Blue Jays and Phillies. There are 4 tiers to choose from, ranging in price from $70 to $150 per month.

The Entertainment plan gets you ESPN, FOX, FS1, NBC and TBS for $69.99/month. However, the Choice plan one tier up is where the RSNs kick in. It also adds MLB Network and costs $89.99/month.

All DirecTV Stream plans come with unlimited cloud DVR and 20 simultaneous streams, although it doesn’t make much sense opting for the Entertainment plan in this case.

Watch the MLB 2022 Season on Vidgo 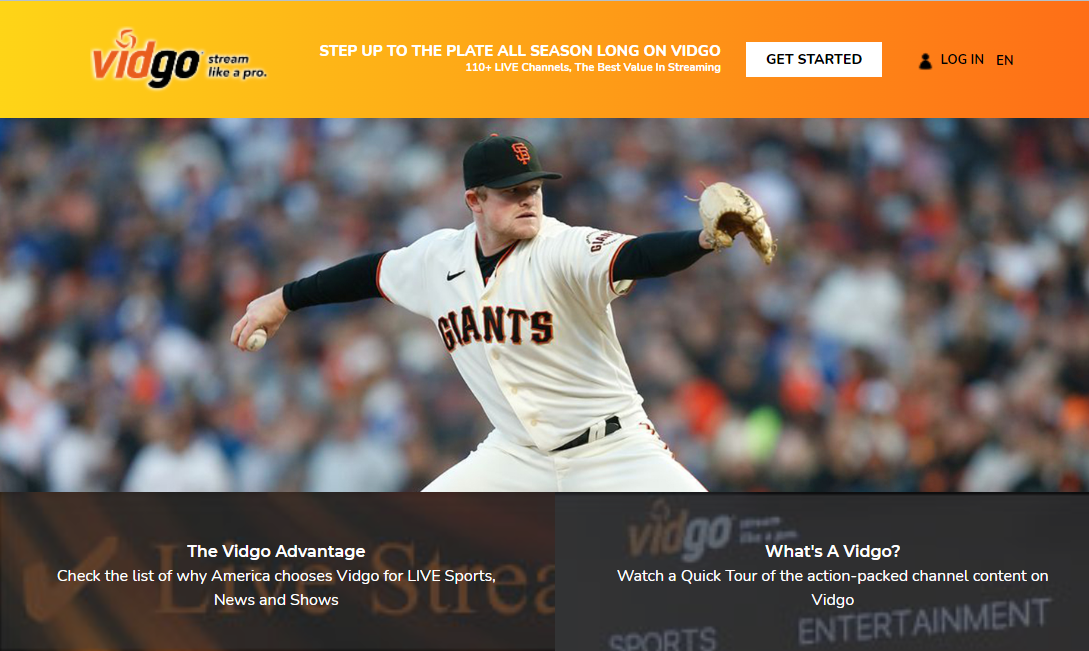 The newest player on the streaming market, Vidgo costs around $10 less than the competition. It has 2 English-language plans: Plus ($59.95/month) and Premium ($79.95/month), but the Plus plan is all you’ll need as both of them include ESPN, FOX, FS1 and MLB Network.

Aside from college sports, Vidgo doesn’t have RSNs. You also won’t find TBS, which means you’ll miss out on a good number of games, especially during the playoffs.

Both Vidgo plans include 3 simultaneous streams, but the cloud DVR is limited to the Premium plan and only works with a select list of devices. However, most live content can be watched on-demand for 24 hours after it airs – if that’s worth anything. 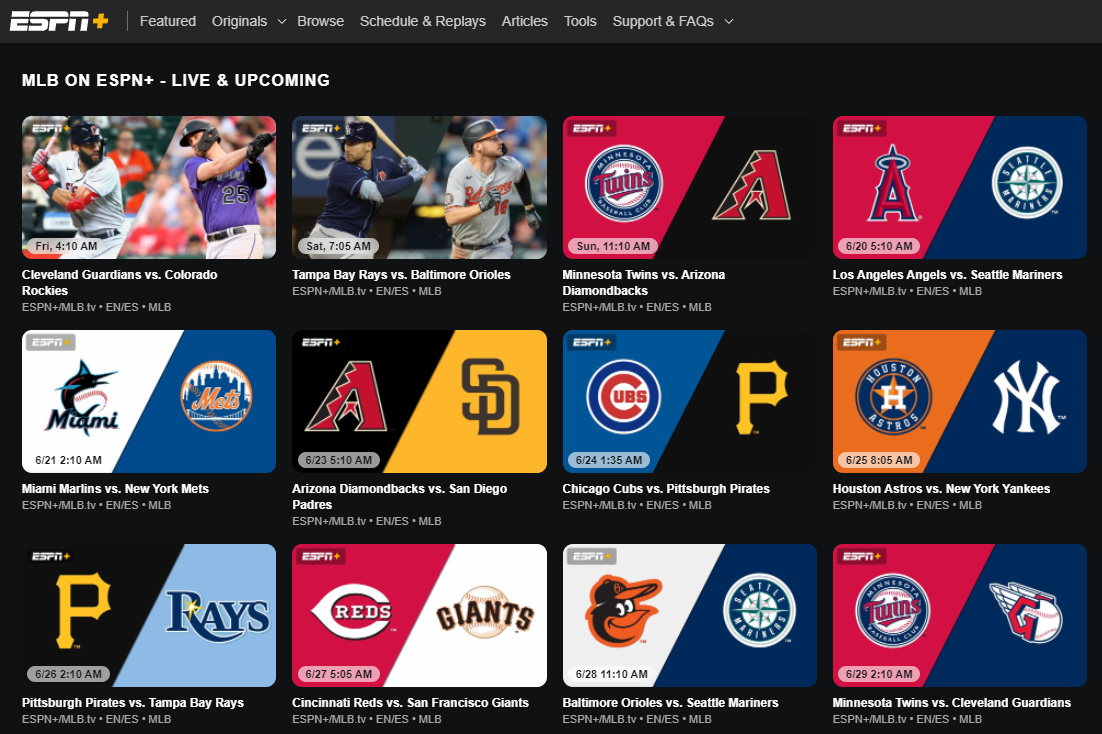 An inexpensive way to add some live baseball to your viewing options, ESPN+ is only $6.99/month. A standalone service, it doesn’t come with any other channels – even ESPN, which is a totally separate service.

ESPN+ airs one live national game every day, but they’re not exclusive and subject to local blackouts. There’s also a wealth of other premium sports content, so it’s definitely worth a look.

The plan allows 3 simultaneous streams. There’s no DVR but everything goes into the on-demand library right after it airs.

Keep in mind that ESPN+ is included with Hulu + Live TV, as mentioned above.

Another option worth considering as a cable replacement is YouTube TV. Its single plan is $64.99/month for 85+ channels, including everything on the list for Major League Baseball – ESPN, FOX, FS1, NBC, TBS and MLB Network.

It’s also one of the only streaming services to offer MLB.tv as an add-on (the other being Amazon Prime Video). It’s $24.99/month or $139.99/season, the same you’ll pay when subscribing directly.

Unless you shell out $90/month for DirecTV Stream, YouTube TV looks like the best option to watch MLB without cable.