In that very specific subgenre known as the road movie, Iranian filmmaker Panah Panahi’s directorial debut Hit the Road bucks tradition by never truly specifying where his characters are headed or how they’re meant to get to their final destination. Nor is the film about “the journey all along,” as the cliché goes; this dysfunctional family really doesn’t have anything more to learn about each other.

Instead, Hit the Road is all about escape—leaving a place that offers familiarity, nostalgia, and relative certainty, just for the possibility of freedom and safety somewhere unknown. As a result, Panahi’s film displays some of the most remarkable uses of setting in a new release this year. Here, backgrounds and wide shots aren’t only meant to look pretty, but they also facilitate emotional processing and at times take the place of these characters’ emotions themselves. 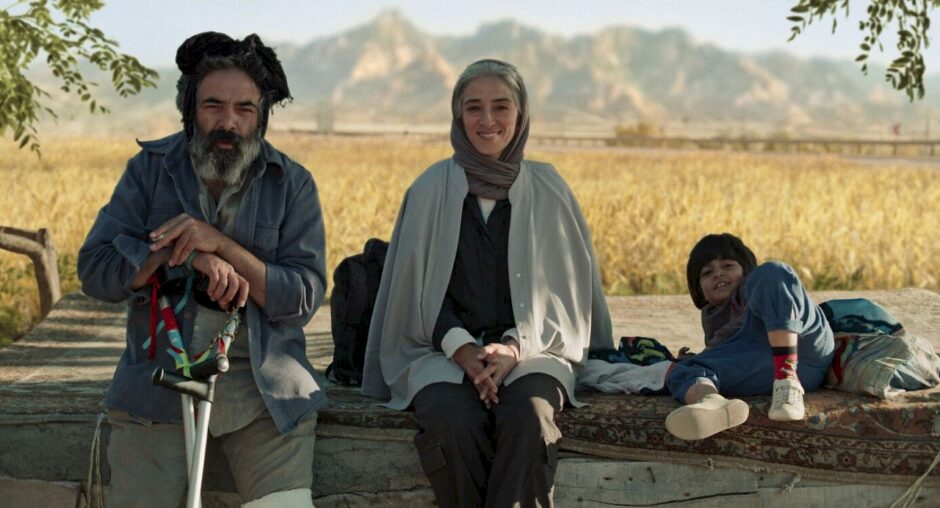 As opposed to the images that international audiences are used to seeing in Iranian films (from the likes of Asghar Farhadi or Panahi’s own father, Jafar), Hit the Road’s world is made up of large, open spaces and rolling hills and valleys. This at first might seem like a purely aesthetic choice, but it also stems from an act of defiance. In an interview with Another Magazine, Panahi, who is outspoken in his criticism of his country’s film industry and its censors, explains that shooting in the city would have forced him to falsely represent certain Iranian customs (e.g. women still wearing hijabs inside their homes). So after submitting a fake, sanitized script to get a shooting permit, the filmmakers set out to make their movie in the countryside.

However, even outside the center of civilization, these characters (and Panahi himself) still aren’t free to do whatever they want. An air of paranoia creeps into the quiet moments, signaled early on when the family’s mother (Pantea Panahiha) buries her younger son’s cellphone in a nondescript spot on the side of the road. They grow suspicious of motorcycles that emerge from fog and over ridges, and they arrive at every new area with a guardedness about them. It isn’t difficult to see how this must have been influenced by Panahi’s own family life, with his father constantly being hounded and suppressed by the government, and his sister having moved to Paris to avoid prying eyes.

And yet, as much as the locations in the film can appear threatening in their unpredictability, there’s also an undeniable beauty to the images captured by Panahi and cinematographer Amin Jafari. It’s breathtaking just how much of these landscapes—their depth, their textures, the shapes they create—are preserved by the camera, sometimes with clouds or flocks of birds just happening to enter the frame in perfect position as if on command.

Here, backgrounds and wide shots aren’t only meant to look pretty, but they also facilitate emotional processing and at times take the place of these characters’ emotions themselves.

What gives these places an added weight, though, isn’t any sense of pride in Iran’s topography. It’s the fact that all this natural beauty brings the central family closer together and brings out their strongest qualities to help each other make it through this journey. It’s only right, after all, that a road movie should see the act of traveling together as a ritual of healing.

During the film’s opening sequence that includes the buried cellphone, the younger son (Rayan Sarlak) is eventually placated by his mother as they look for familiar shapes in the sandy hills in the distance. Later in the film, father (Hassan Madjooni) and older son (Amin Simiar) have a rare heart-to-heart conversation by the river while eating fresh apples, the water washing away worry and the unspoken tension between them.

In one of the most striking moments in the film, father and younger son gaze up into the night sky after a particularly emotional ordeal, letting their imagination carry them away as the earth around them dissolves into space and starlight. And during each of these scenes, none of the characters really state out loud what’s really bothering them. The setting itself seems to shoulder their burdens and resolve their conflicts.

But there’s no better example of Hit the Road’s use of setting than in its emotional climax, which (without getting into specifics) takes place entirely in one unbroken extreme wide shot, with the open sky taking up 80 percent of the frame and every character practically reduced to a speck. You would expect close-ups and more dynamic staging for such a crucial scene, but Panahi’s instinct to simply let this particularly stunning location speak for itself is a stroke of brilliance.

In another interview with Filmmaker, Panahi describes his intention with the scene by saying, “We see the family as part of nature. Previously we’d seen the family as either background or foreground, but in this scene, they become part of nature.” It’s here where setting completely takes over and overwhelms character, which can be read as something tragic, like these people have been rendered helpless to forces far beyond their control.

Or one could read this scene as the culmination of these characters using setting to carry each other through the difficult situation they find themselves in. Panahi sets the camera at a huge distance, sparing us from seeing their pain—and respecting the characters’ privacy by letting them sort through things on their own, without the audience intruding upon them. Their pain and their anguish, we seem to be told, will inevitably become smaller and more manageable in the grand scheme of things.

Panahi doubts that Hit the Road will receive an official Iranian release. Even as the film potentially showcases Iran as a picturesque destination, the film’s story (as well as its use of banned songs from pre-revolutionary times) just isn’t likely to make the censors happy. But in his first film, Panahi has managed to do what many, more experienced filmmakers have struggled with: politicizing setting and recognizing that a place is inseparable from its people and the conditions in which they live. For Panahi and his father, the Iran they seem to be truly proud of has nothing to do with the rules and restrictions that limit their expression, but the people traveling its backroads and crossing its borders to keep their loved ones safe.