For a few brief seconds, there is only sound and darkness. Flashlights graze antique diagrams of radio and sound waves. Static drizzles through a speech about the value of radio and the “fundamental principles of inter-human communication.” Then a narration proper begins: “I dreamt that there was a war. The greatest of all wars. In the sky, we could see giant radios falling on the monsters’ heads, just like bombs.”

The image track takes on a multiple-exposure of footage mixing new and found, parts of it oversaturated. It all gives way to a glorious singular stream of orange sunlight through the leaves, and then a brilliant golden reflection on top of a lake beneath a bright red tree at the beginning of autumn. An abbreviated and unsteady gaze across the clouds recalls the opening of Jean-Luc Godard’s Passion. A great deal of Renaud Després-Larose and Ana Tapia Rousiouk’s Le rêve et la radio (The Dream and the Radio) recalls the style of the French master, from superficial similarities of narration and sound collage to deeper, anxious yearning for collective action, dreaming out loud about love in modes juvenile and wise. It has a naiveté that lends an ambition sorely lacking in the vast majority of filmmakers’ approaches to working in the narrative feature form today. Le rêve et la radio stretches further than it can reach, but how else should one be expected to lengthen their ligaments? The dazzling, five-minute prelude hinting at the film’s dreamy aesthetic intentions ends with a girl running in circles and finally collapsing in the grass next to an empty soccer field. She is Béatrice Ackerman (Geneviève Ackerman). The camera moves unsteadily with her, Després-Larose (who also serves as cinematographer) showing us his fearlessness in the face of sudden angular movements. Via montage, the calm of her slip into slumber is interrupted by the chaos of the city around her, crowds of hockey fans populating downtown Montreal at night.

Around the 10-minute mark, a narrative begins to form atop this experimental foundation, as we see Béatrice in the metro. She observes a man on the phone, follows him out of the metro, and picks up the cellular device he seems to have dropped. It remains unclear if he has dropped it absent-mindedly or in the hopes that she might follow him to return it.

But rather than continue to follow him, she takes the phone to the artfully under-lit home of her dear friends Eugène Larose and Constance Garcia Rousiouk, played by the film’s co-directors, also sharing their last names with their onscreen counterparts. Eugene works in a video store but intends to write a book, and holds an unrealized interest in filmmaking. Constance does voice work for radio ads but wants to work on her own sound projects. One imagines that these aspirations are not far off the mark from the filmmakers’ real-life goals as well; both have three previous credits working on fellow Canadian director Olivier Godin’s films—Després-Larose as cinematographer and Rousiouk as sound artist. The works (and indeed lives) of the pair are seemingly inseparable. On a particularly well-known festival’s website where the film premiered, each of their credit pages feature the same headshot with both of them in the picture.

Ultimately it’s this kind of self-assurance that makes a world of difference for younger filmmakers. They held complete creative control and it shows, both for better and worse.

When the “found” phone rings, Constance answers, posing as Béatrice, and arranges to meet the man from the metro the next day to return the phone. He is Raoul Debord (Étienne Pilon), a revolutionary political activist—his name cobbled together from the Situationists Raoul Vaneigem and Guy Debord—whose reading of a speech at a meeting plays as the film’s centerpiece both ideologically and aesthetically, as he is shown in a glitchy analog video loop. The audio track follows suit as the delay begins to kick in and his words overlap one another, returning to blanket like the next ones as they’re spoken.

Eugene and Constance live together as a couple, but their friendship with Béatrice, while close, simmers with longings left unspoken. Constance thinks that Béatrice was in love with Eugene at some point, a revelation followed by a startling, near-silent sequence of delicate snowfall in the dark, superimposed over a tender close-up of Béatrice playing with a flame, almost as if she is listening in via psychic means. Constance also seems intensely drawn to Raoul, and her attraction seems to threaten not only Eugene, but the entirety of the stability of the domestic situation the pair have built over the years, despite its ramshackle outer appearance. They’re happy. Together they hold “reading rituals” on a regular schedule, wherein one reads out loud to the others. 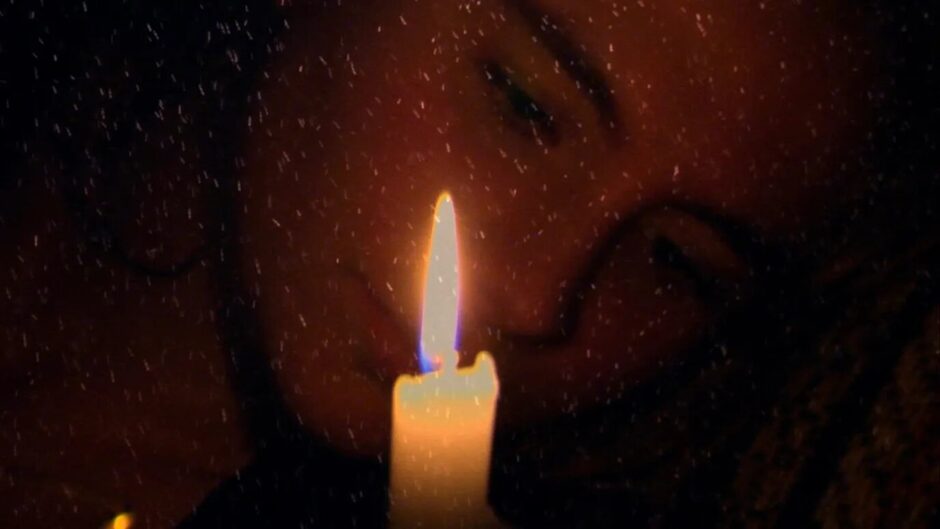 There is an exciting montage in the final third, in which images of hands over a calculator and an itemized list on a pad of paper repeat, as the couple goes over a budget—utopian calculations to decide what amount they might need to save up in order to buy themselves the necessary equipment to work on their passion projects for a few years of freedom. The images begin to play out a sort of fantasy future, almost comical for its duration.

As they continue to add items to the list, a flat-screen TV arises—purportedly just for watching movies, but the projected future shows Eugene setting up an antenna to watch hockey. Of course, once they’ve been through all the addenda of various “luxury” items, they wind up with a calculation of 13 years of proper work required. The film’s directors spent five years attempting to drum up financial interest in Le rêve et la radio, before they finally saddled up and made it themselves.

Ultimately it’s this kind of self-assurance that makes a world of difference for younger filmmakers. They held complete creative control and it shows, both for better and worse. In the final third, the narrative takes a surprising and mysterious turn, handled with simple visual ingenuity. Though the film’s montage and long takes are mostly economical—especially in the ending—frames from within the household give the sense that the mise-en-scene was still thoroughly pored over prior to a camera taking it all in.

A card in the end credits lists names that appear on the soundtrack, but no specifics of which musical selections are heard are offered, just: “TEXT / VOICE / SOUND / MUSIC.” Filmmakers, composers, artists, and theorists all simply sit together in a single list that includes such visionaries as Robert Kramer, Guy Debord, Rainer Maria Rilke, John Ford, Michèle Bokanowski, Jean-Luc Godard, Anne-Marie Miéville, Wolfgang Amadeus Mozart, Béla Bartók, Claude Debussy, and La Monte Young. And amidst all these giants throughout art’s history, the film’s three lead actors—a level playing field for diligent newcomers.