Raven BrunnerI9.22.2022
Pierre Földes Interview – Director and Writer of ‘Blind Willow, Sleeping Woman’
“I was interested in a whole world of emotions and feelings, and they're very fragile.”

The film, which had its international premiere at the 2022 Toronto International Film Festival, features a handful of colorful characters—including Komura, who is suffering through the pain of heartbreak; Kyoko, bound for a journey of self-discovery; and a human-sized frog set to battle a giant worm, all during the aftermath of the Tōhoku earthquake and tsunami of 2011. It is an ambitious story of survival and self-preservation, one that writer-director Földes would say involves a “whole world of emotions.” 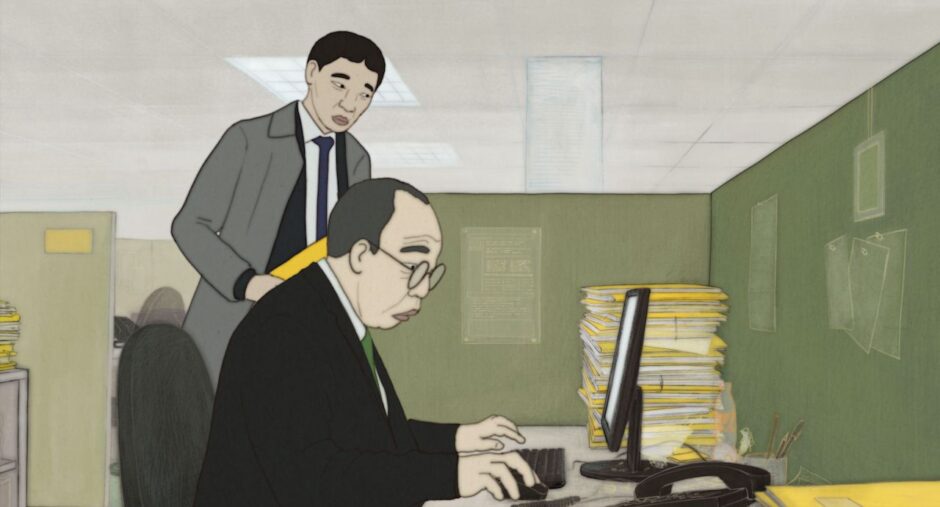 Projektor: What is it about Haruki Murakami’s work that inspired you?

Pierre Földes: I started with reading his short stories. At the time, I was living in New York and working as a composer. When I started making short films, both in animation and live-action, I just thought, “Wow, I would love to be able to adapt something of his world into a feature.”

When I got the opportunity, I picked the stories I felt most attracted to. The first one I picked was “Blind Willow, Sleeping Woman,” so I decided to keep the title of that story for the film. But the film is actually adapted from short stories from three different books: The Elephant Vanishes, After the Quake, and Blind Willow.

Why did you choose to make this film in animation over live-action?

I’ve been playing between live-action and animation for quite a long time. In fact, when I started working on this project, I imagined that it would be a mixture of techniques. I wanted to keep some actors and backgrounds in live and also mix different animation techniques. I kept that concept, but little by little, the concept of keeping live actors fell out and it just became full animation.

How did you settle on the final medium? Did this affect your script?

I’m not very organized in my thoughts. I try to believe in audacity and my inspiration. When I was writing the script, it’s not like I thought, “Oh, this is going to be the story about this, and this is going to be the end.” Experts will tell you [that] you really need to define the end, but that’s not my interest. I was interested in a whole world of emotions and feelings, and they’re very fragile. I want to be able to explore them and talk about them, but not too much. I want the person who’s watching the film to understand it in a way that they can link to something that’s their own. I don’t want to tell you, “Oh, this is the story. Follow it from here to there.” I am not interested in that. The story needs to come fairly naturally.

You mentioned that you previously worked as a composer. Did you compose the music for the film?

Yes. I first did a storyboard of about 1,400 pictures and then we shot the film in live-action with actors, and that served as inspiration for the animation. It was really wonderful because once you have the storyboard pictures, you have a real notion of how the film and its structure are going to work. At that point, I started putting various elements of pre-existing music in it. I used music from previous projects, mostly classical. Then when the film was being made, I got rid of it all and erased my whole mind, and started writing the music.

Experts will tell you [that] you really need to define the end, but that’s not my interest. I was interested in a whole world of emotions and feelings, and they’re very fragile.

I was hoping to have lots of time to do that. I remember turning to production and saying, “Listen, I need four or five months to do the music,” and, of course, that didn’t happen. I had to rush and the terrible thing is that I hadn’t done music for three years because this film was in production. I had to get back into my music writing software and dive in, note by note. Some days, I thought, “Oh, I can’t do this. It’s terrible.”

Is there a character that you relate to or admire from your film?

There’s no character I admire in this story. I enjoy Frog. I played Frog myself when shooting the live-action. I really enjoyed playing that character. He’s over the top and I really liked him. On the other hand, the little frustrated banker who’s miserable and pathetic, and everyone takes advantage of… I can’t say I admire him, but he’s very lovable. That character is very, very moving, maybe because he’s so pathetic. The film doesn’t try to exploit emotions, the way people teach you to in script writing. I didn’t use any of those techniques. I just tried to create characters that I thought were true.

There’s a moment in the film where he has this monologue and he’s talking to Frog in the mirror, but then the camera shifts, and he ends up talking to himself in the mirror, which in a sense he was doing from the beginning. He describes how his life is miserable and he wonders why he is living at all. But then he gets the opportunity to give himself some credit and to evolve and stop believing that he’s such a pathetic loser. It’s wonderful for me to see him late in the film. It is just a wonderful feeling.

What is your dream audience for this film?

I think producers have honed their ideas on what they need to sell the movie. But what I have noticed, from talking with people who have seen the film, is that really the very young people—not children, but almost—seem to get the film much better than older ones. I’m very happy about that. Not just for my film, but because it means that the things I am sensitive to, they are sensitive to as well. Maybe I’m, in fact, very young. [Laughs]