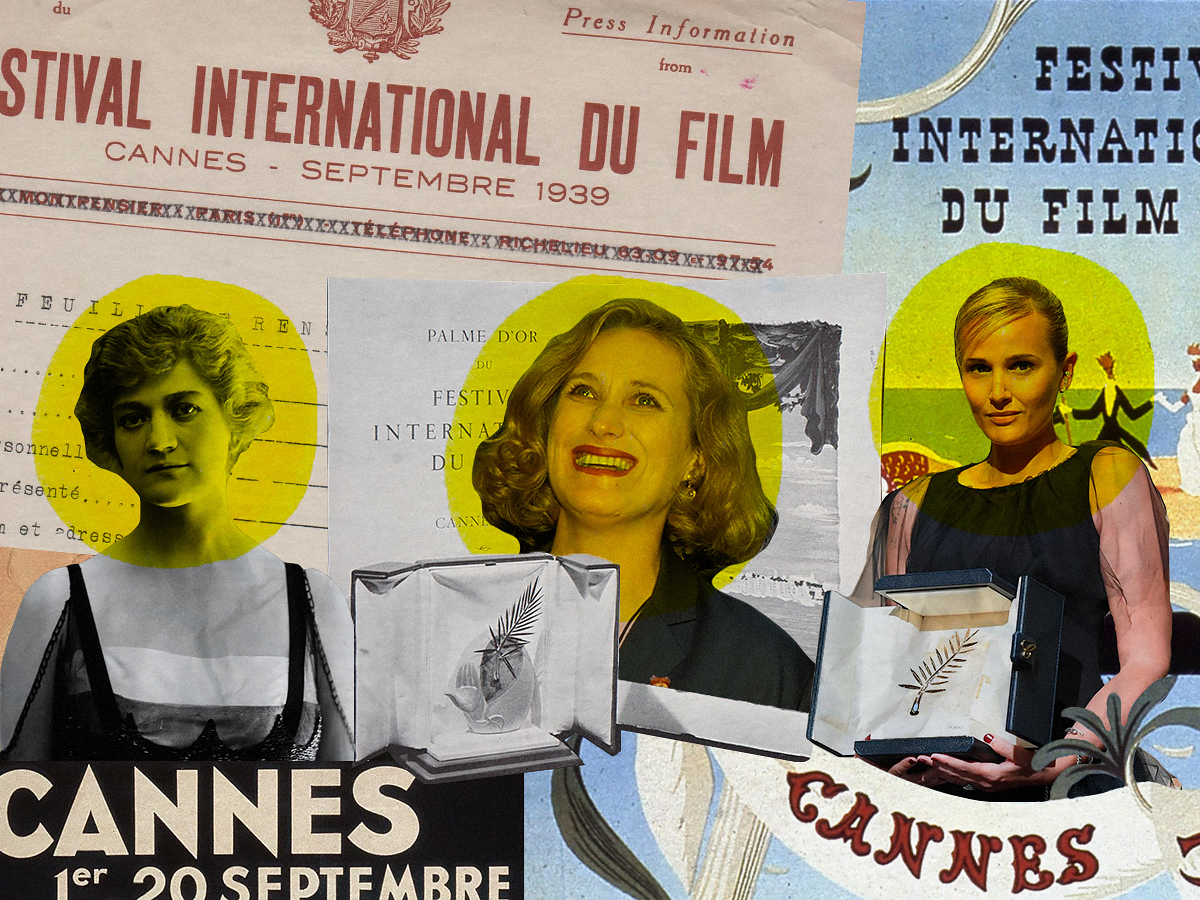 Bilal Zouheir & Renee CuisiaI5.16.2022
Representation in Cannes: Why Does Cannes Exclude Minorities?
98% of Palme D’Or winners are men, 94% come from the Global North, and almost 86% are White. We take a closer look at Cannes Film Festival's exclusive "club" status.

The Cannes Film Festival, or the Festival international du film as it was once officially known, is arguably the most prestigious date on the festival circuit. This year, journalists and fans alike celebrated the star-studded Competition section, with releases from Kristen Stewart, Claire Denis, and David Cronenberg.

Cannes’ awards are some of the most coveted film canons as well; they can exponentially increase the value of a film and set it up for success later in the award circuit. When Parasite won the Palme D’Or in 2019—the highest award of the festival—it catapulted into success and swept major awards in succeeding festivals, eventually winning Best Picture at the Oscars. In many cases, leveraging a win of the Palme D’Or can even result in revenue in the hundreds of millions of dollars.

But underneath all this buzz and prestige lies a complicated history. For the longest time, Cannes has been the hunting ground for predators like Harvey Weinstein, so much so that in 2018, the organizers set up a hotline for sexual assault victims.

It also has a horrendous record in other facets of inclusion. Film Professor Dina Iordanova wrote a 2018 essay for The Conversation that explains how Cannes’ club-like nature perpetuates exclusion. She writes that “selection to the Cannes main competition is more about ensuring that the new work of club members is up to standard and can be shown rather than about selecting the best films from around the world.”

We wanted to ask who gets to make it into the club, and who gets left out.

Since the festival’s inception, 406 films have received its biggest awards: the Palme D’Or, the Grand Prix, the Jury Prize, the Best Director award for feature films, and the Short Film Palme D’Or for shorts.

We categorized the winners of these five categories to see how many women, people of color, and Global South filmmakers have won before. 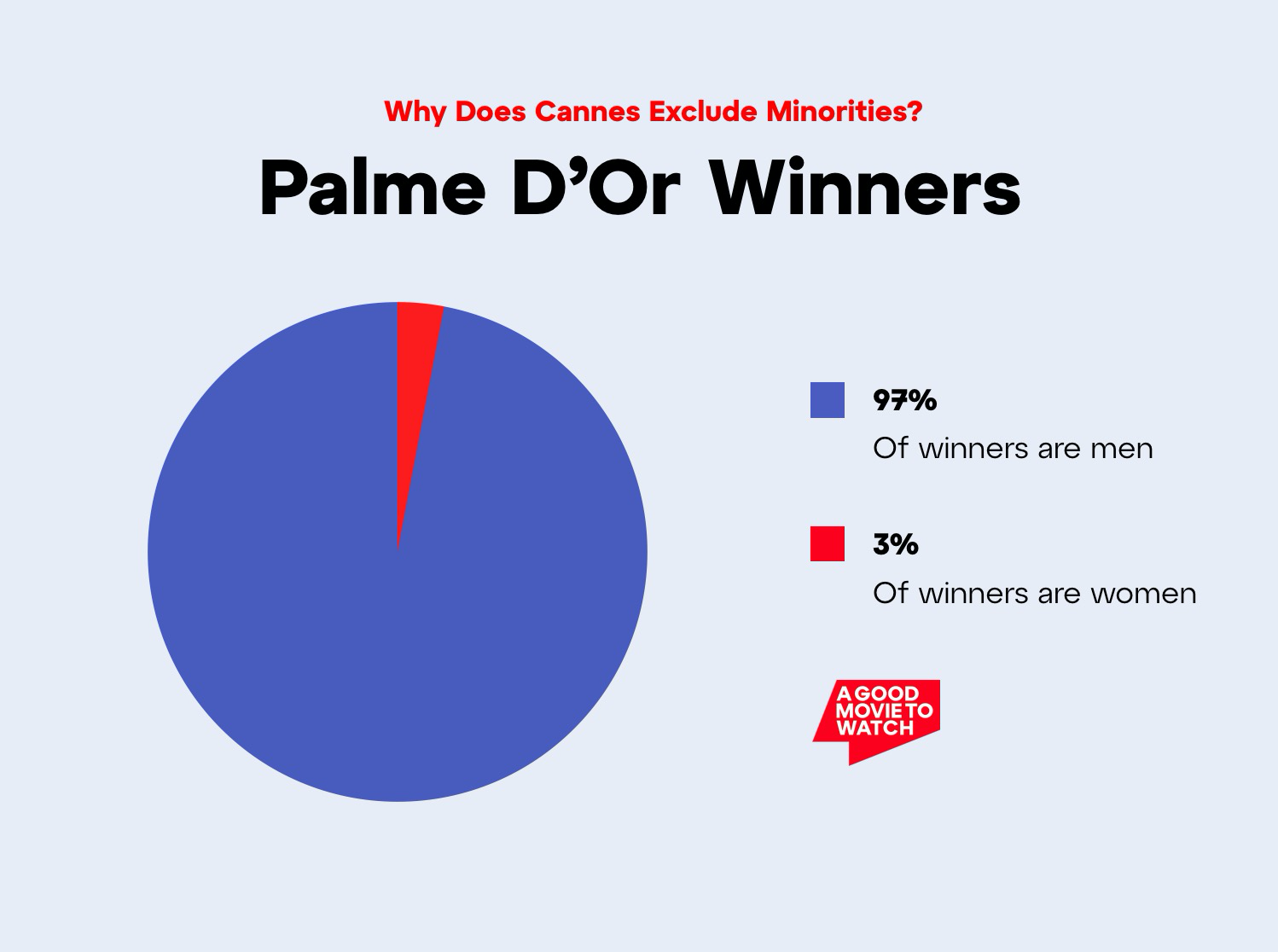 Only three women have ever won the top prize in Cannes’ 83-year history, versus 97 men.

The first woman to win was Danish filmmaker Bodil Ipsen in 1946 for the film De røde enge, which she co-directed with male colleague Lau Lauritzen, Jr. Then known as the Grand Prix, the award was shared with 11 other filmmakers as part of an experimental year that favored creativity over competition.

It would take 47 years for the next female filmmaker to be recognized: Jane Campion for The Piano in 1993. The most recent win for a woman would come even decades later, when Julia Ducournau was awarded the top prize, now known as the Palme D’Or, for Titane in 2021.

All of Cannes’ five awards considered, only 6% of the winners are women. In 2018, Cannes signed a gender parity pledge after 82 women led by Agnès Varda protested gender inequality during the festival. This pledge is yet to start moving the needle in any significant way.

In a 2019 report by Reuters, film sales specialist and gender advocate Delphyne Besse said that “We hear a lot about how times are changing and improving, and it’s true. The idea is to support that trend. [But] the figures still don’t look good.”

Iordanova adds that “For as long as Cannes operates as a club that needs to maintain the elite standing of its members, women filmmakers will remain out in the cold.”

94% of Palme D’Or winners come from the Global North 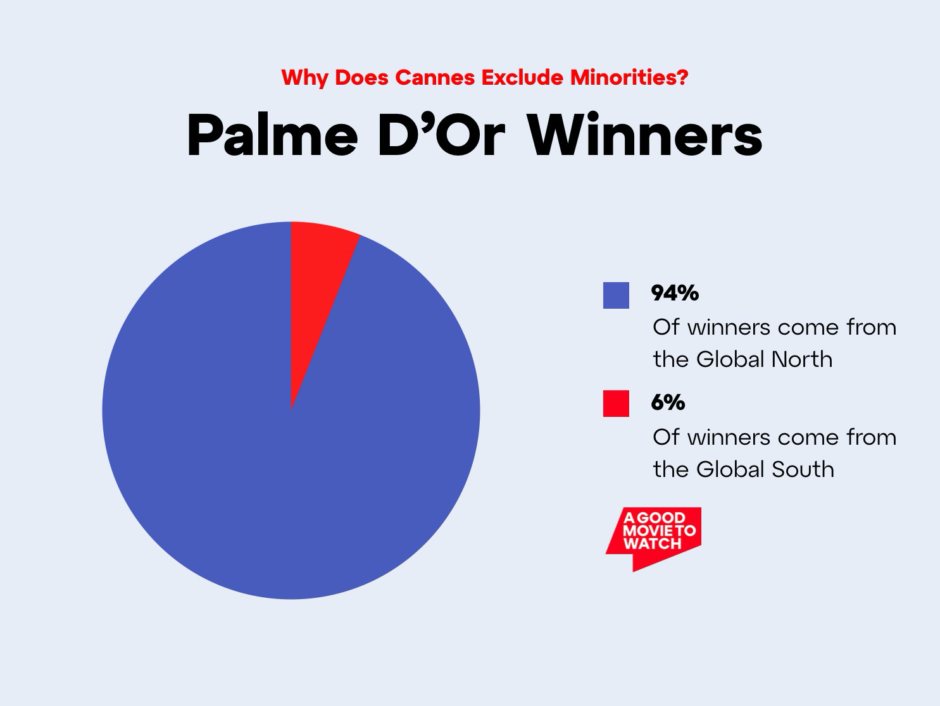 The awards in Cannes are often seen as a more international alternative to other celebrations such as the Oscars, and up to 2003, the festival’s official name was “festival international du film.”

These awards, however, especially the most prestigious ones such as the Palme D’Or and the Grand Prix, go almost exclusively to filmmakers from the Global North—that is, powerful and influential nations such as the United States and France in the west and Japan and South Korea in the east.

Countries that fall under the Global South haven’t gotten nearly enough of their due despite being active and prolific in their own right. The Best Director award, first given in 1946, hadn’t been won by a filmmaker from the Global South until 2006, when Alejandro González Iñárritu bagged the award for his English-language film Babel.

China and India, two of the most populous countries in the world—each are home to at least a billion people—have a combined one win between them. This is despite China currently being the world’s largest film market, and India following suit. Meanwhile, Sweden, a country of only 10 million people, has four wins. 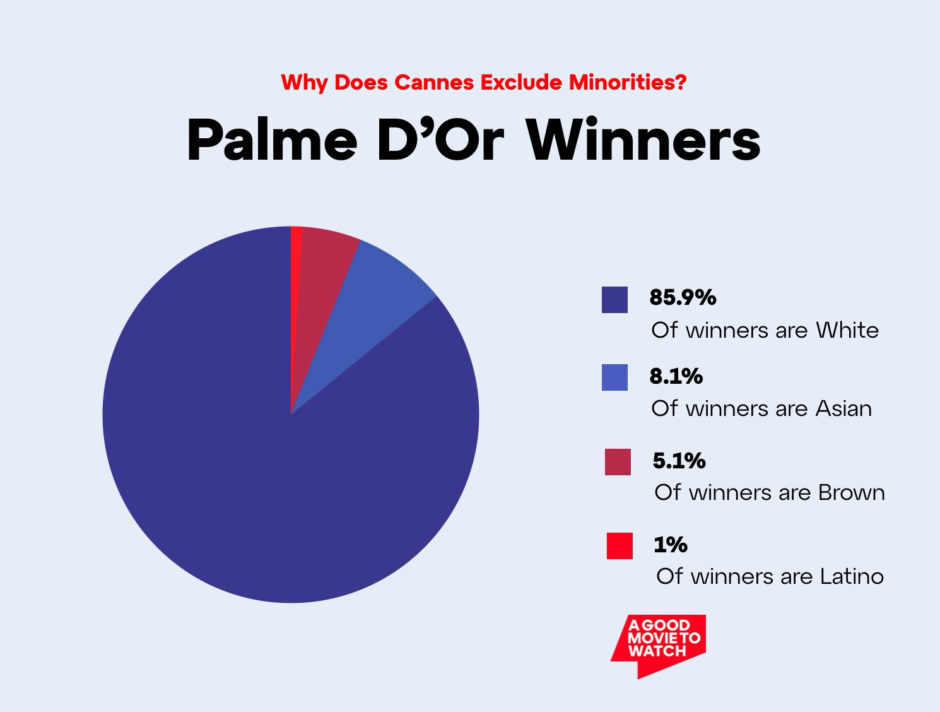 Perhaps unsurprisingly, the Best Director recipients are overwhelmingly White. Almost 86% of the winners belong to this category, and a little shy of 9% are Asian.

The only non-White and non-Asian filmmaker to win is Alejandro González Iñárritu for Babel in 2006. No Black filmmaker has ever won the coveted Best Director title.

Meanwhile, of the 100 Palme D’Or winning filmmakers, 84 are White, 8 are Asian, and 5 are Brown. Only one Latino filmmaker has ever won: Emilio Fernández in 1946 for María Candelaria.

In fact, the bulk of minority representation in the Palme D’Or comes from the year 1946, the second festival edition that saw the committee experiment with different formats. In the same year that Bodil Ipsen became the first woman to win the top prize, Emilio Fernández and Chetan Anand (an Indian filmmaker) also shared the coveted award with her.

Low representation numbers are present not only in the awards but in the festival line-up as well. This happens despite festival leadership often trying to give the opposite impression. Cannes Director Thierry Frémaux promised that the 2022 edition will have a “stronger presence of female directors,” but it ended up being a decline from 2021. As Kate Erbland of Indiewire pointed out, “it’s not the first time Fremaux has attempted to inflate the numbers despite no marked change.”

Haenel announced she would be taking a break from acting so as not to take part in what she calls the “feminist washing machine”, and says in the same interview, “[CNC Director] Dominique Boutonnat remains in office while he is indicted for sexual assault. But Thierry Frémaux, from the Cannes Film Festival, puts three women in the 2022 Official Selection, so I am told that this is going in the right direction? In the sense of being had, yes!”

It helps to remember where Cannes takes place, in a country where discussions on race are taboo, many leading female cultural icons consider #MeToo a puritanist witch-hunt, and where the president Emmanuel Macron dismisses conversations around race and gender as “wokism” that gets “imported from the United States.”

It’s no surprise, then, that the CNC continues to produce the same kinds of films, while Cannes, as “a long-standing partner,” continues to select these films over everything else. In this way, Cannes operates less like an international festival and more like a private “club,” as Iordanova puts it.

The way the juries are set up also favors the club aspect of Cannes, with many jury presidents having been accused of giving awards to their friends.

In 2004, jury head Quentin Tarantino awarded the Palme D’Or to Fahrenheit 9/11 (directed by his friend Michael Moore) over the South-Korean modern classic Oldboy. Both Tarantino and Moore had one producer in common: Harvey Weinstein, who in that same Cannes edition was reported to be with one of his victims.

Similarly, in 2009, jury head Isabelle Huppert handed the Palme D’Or to her “best friend” Michael Haneke, while Italian filmmaker ​​Nanni Morett did the same in 2012 for his friend Jean Labadie.

“We’re accused of a thousand misdoings, undeclared friendships, and secret pacts,” Frémaux has said about the festival line-up in 2017. But he retains that the “single objective [is] to make the best selection possible.”

If this is true, it only makes sense to see a more diverse and extensive set of winners moving forward. Ducournau’s recent victory was a step in the right direction, representative of filmmaking outside of the auteur circle, but Haenel’s recent exit, while commendable, is disheartening.

Only time will tell if the very little progress we’ve seen will carry on in the future or if they will remain an outlier, a spectacle to be noted every other year (or decade) to come.

To create this dataset, we assembled all the award winners in one spreadsheet and researched their race, gender, and origin separately. There was so much of one category—White, Male, Global North—that we ended up copy-pasting it throughout most of the document. Nearly 80% of the award categories studied here have been won by this one combination.

You can access the table here, sourced originally from publically available tables on Wikipedia.

Seventh Row: A history of women directors at the Cannes Film Festival

The Film Stage: Adèle Haenel Steps Away From the Film Industry

Projektor reached out to Cannes’ press office for a statement; the organization declined to comment.