Xuanlin ThamI12.8.2022
Christine Ko Interview – Director of ‘The Woman in the White Car’
“You don't need to reconcile with your immediate aggressors; you can find healing and compassion from people who've had similar experiences.”

Christine Ko’s feature film debut The Woman in the White Car revolves around women: violent women, resourceful women, women who stick up for each other, and women who destroy each other. Following no-nonsense police officer Hyun-ju (played by Parasite’s Lee Jung-eun) as she becomes entangled with three other women, each pursuing their own path of violence or revenge, the narrative reveals of this push-and-pull thriller are best left to be discovered.

Beginning with familiar nods to a well-established South Korean canon of morally ambiguous police procedurals, Ko’s tale of deception, culpability, and innocence eventually ventures beyond the trappings of genre to explore new ground. Despite being ultimately about the connections we choose to protect and those we choose to sever, The Woman in the White Car is far from gently idealistic: rather, it’s grounded in resilience and grit.

We spoke to Ko at the European premiere of her film at the BFI London Film Festival to discuss vulnerability and violence, sisterhood and family, and breaking away from gendered structures. 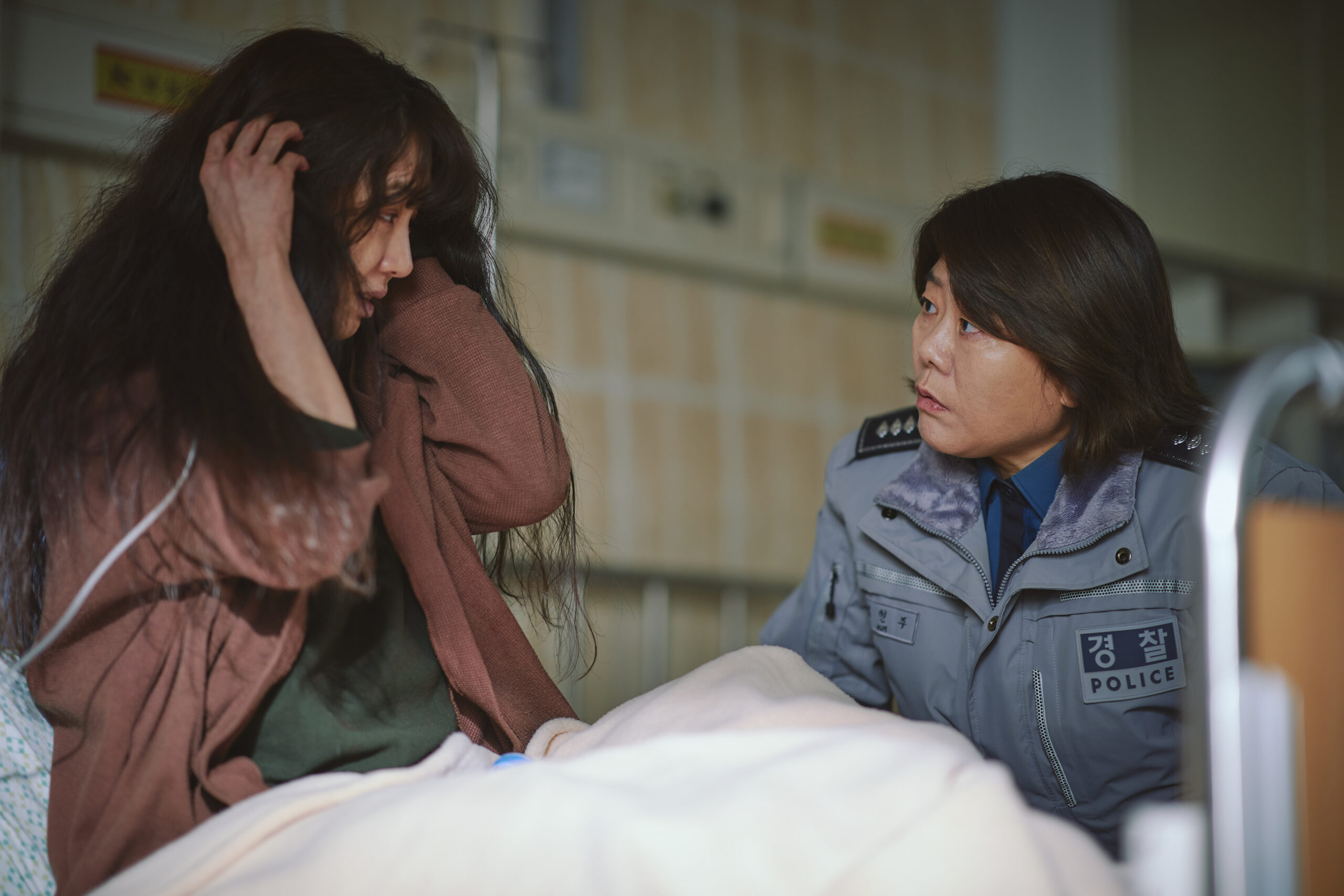 Projektor: How did the idea for The Woman in the White Car first come to you? Did you always know that you wanted to make a police procedural as your first film?

Christine Ko: Actually, yes. But the idea that I had originally was about how perceptions can be deceiving. I approached a writer that I had worked with on a K-drama called Diary of a Prosecutor, and I told her I want to do a psychological thriller involving two women in an enclosed space, isolated from civilization. There’s one woman in this house, possibly against her will, and another woman who’s attacked and very bloodied, and she runs into this house asking for help. The woman who was originally in the house assumes that [the other woman is] a victim of some crime, but we later find out that she’s actually the perpetrator of a different crime. I wanted to play on the assumed vulnerability of women in thrillers.

Vulnerability here is used as a veneer for darker motives. What were you trying to explore with women being able to use assumptions of vulnerability to their advantage?

We wanted to make sure that gender doesn’t really matter, [with] who incites the violence and who’s a victim of it. The screenwriter [Seo Ja-Yeon] and I are both very interested in how female stories are told. In Korean mass media, I feel like we haven’t really had a plethora of female antagonists. The fact that they can use their vulnerability to their advantage, that’s exactly what we wanted for the complexity of the characters.

What drew you to using sisters as your characters?

It actually started with the word unnie, which is “older sister” in Korean. We use that term to describe other women who are close to you and who are older. So it’s ambiguous: do you mean older sister? Or do you just mean a woman who’s older than you? We thought we should use that word in the beginning, because it’s ambiguous. Because we have this twist at the end, that word unnie started as a mechanism, a kind of trick.

I think it was a really interesting way to develop a story, the fact that it started from this one word that’s very uniquely Korean. I wrote the English subtitles to the film, and I didn’t want to translate it into “older sister” from the beginning. I wanted to make sure the audience understood what that word meant. Not in the English sense, but in the Korean sense.

This film interrogates the idea that family is inherently a safe haven. What appealed to you about making a film about violence within family structures?

When that violence happens, it comes from people that you’re supposed to trust the most. I feel like that changes someone on a molecular level. They’re the first point of reference for human-to-human interactions, and [they] color all the relationships you have afterwards. This film is about how trauma is not only isolating, but also common. I thought it was a way of bringing us together universally, because [it’s] something that, if we choose to share, could be bond-forming. So the family thing was born out of a way to talk about trauma in the most basic way it affects people.

I think women have this ability to see past the veneer of outward strength … and right to the center of your vulnerability.

One might traditionally expect stories like this to go towards reconciliation, but you decided to take a different fork in the road.

You don’t need to reconcile with your immediate aggressors; you can find healing and compassion from people who’ve had similar experiences. I wanted these characters to find redemption through overcoming their own trauma and by helping each other. For example, [one woman] overcomes her guilt about not being there for her sister by helping [another] escape from her own sister.

Contextualizing this within South Korea—quite a nuclear family-oriented society—what do you think this film does by allowing these women to break free from those structures?

These familial structures actually stifle women in a lot of ways. South Korea is one of the worst countries for gender inequality in terms of the wage gap or just gender roles. The screenwriter and I wanted to make sure these women would break the mold. Our detective is kind of a hardened woman, and she doesn’t force herself into the good daughter role when it comes to her father, because she knows he doesn’t deserve that. We wanted everyone to be free of that.

The feedback that I got from Korean audiences, and a lot of them were women, was about how it was refreshing that these women’s trauma is based in the traditional social structure—but the way that they save themselves breaks every bond with that structure. I think women have this ability to see past the veneer of outward strength, like you said, and right to the center of your vulnerability. I wanted all three women to empathize with each other, in the first moment of just meeting eyes.

There are definitely some callbacks here to great films—a rock being used to smash someone’s head reminded me of Parasite.

I totally thought that when I was editing. If anything is an homage to one of my favorite directors ever, that would be it. That rock. 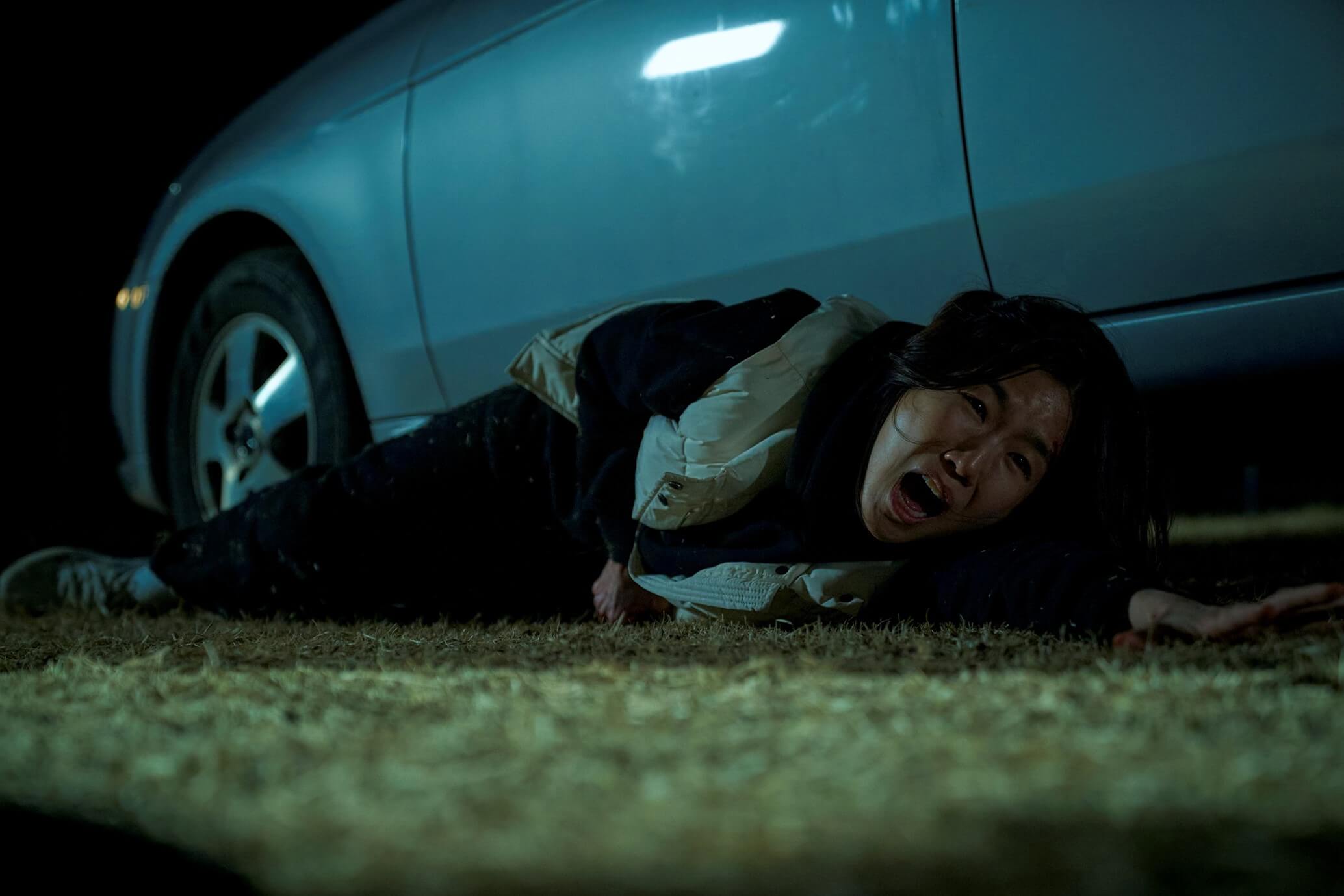 And then Lee Jung-eun is the detective in the film; she was also in Parasite.

I honestly only realized that after I filmed it! Lee Jung-eun is a global star now. I’m so grateful to have been able to ask her to be in the film. She said she had been wanting to portray a policewoman in her career, so I approached her at the right time. It wasn’t intended. But Parasite is definitely one of my favorite films.

Did you have any other stylistic or cinematic storytelling references? I couldn’t help but notice that Lee Jung-eun’s hat was quite Fargo-esque.

I don’t think any of the Korean police procedurals have ever used that hat, so we had to procure it from an actual police station. I wanted that imagery, and Fargo has been a huge influence on me. I rewatched Rear Window, and also Gone Girl…

This was originally intended to be a two-episode TV series, but as I was editing it I thought it could work as a feature film. The way we shot it, there were a lot of tight closeups of faces, and I was doing that because I originally intended for it to be for a smaller screen. So that was a stylistic choice. But when I was watching it in the theater, I thought it was actually more powerful. It might not be very cinematic, but because people ended up watching it in the cinema, it was refreshing. A bit new and a bit foreign.

What kind of films do you want to make next?

I’m interested in good and evil, and how that doesn’t really exist. When I was first jotting down my thoughts, the [idea] that hit home was: nobody commits evil because they think it’s evil, they do it because they think it is their happiness. I love this dichotomy. I majored in psychology, and abnormal psychology was my favorite class. I always liked looking at the outliers of the norm, so I think it all kind of tied into this one project that I will cherish forever. Those are probably themes that I’m going to want to stick to. I always want the audience to be able to have a conversation: do you think this was bad? Would you be able to do that in that situation?