Gerald CajayonI6.29.2022
Great Freedom: The Queering of the Prison System
An Oscar-shortlisted Austrian drama about the bittersweetness of finding love in confinement.

In 1935, the Nazis intensified Paragraph 175 of the German criminal code, which punishes men committing sexual acts with other men. An estimated 100,000 arrests took place in violation of this statute, with around 5,000 to 15,000 convicts sent to concentration camps. This would later be known as one of the most severe persecutions of homosexuals in history. It was not until 1969 that Paragraph 175 would be revised again, leading to its eventual repeal in 1994.

While the fall of the Nazi regime signaled the end of tyranny for many people, it was not the case for gay men, who found their repression taking on a different form. Great Freedom follows the story of one such man in Hans Hoffman (the magnificent Franz Rogowski) who was transferred straight to prison from a concentration camp. The film covers three timelines in Hans’ life, each one corresponding to a period of his incarceration: 1945, 1957, and 1968, told in a non-linear manner. This allows director Sebastian Meise to extract as much emotionality from the narrative as he needs and makes Hans’ life much more engaging to see unfold.

As the title suggests, the film interrogates the kind of freedom that is borne out of such harsh conditions. It is “great” out of necessity; it has to be great lest it ceases to exist. During the Super 8 surveillance footage that opens the film, scenes from a cruising spot are shown to the audience, an artifact of how gay men like Hans used to satisfy their sexual desires in secret. It is then revealed that the footage is actually the state’s and that it is being projected as evidence of Hans’ “criminal” acts, which he does not deny. This agency defines Hans’ freedom. He is powerless against the law—more so against one that has remained fascistic even under West Germany’s denazification era—but he will never deny his true identity even if it results in the curtailment of his freedom. 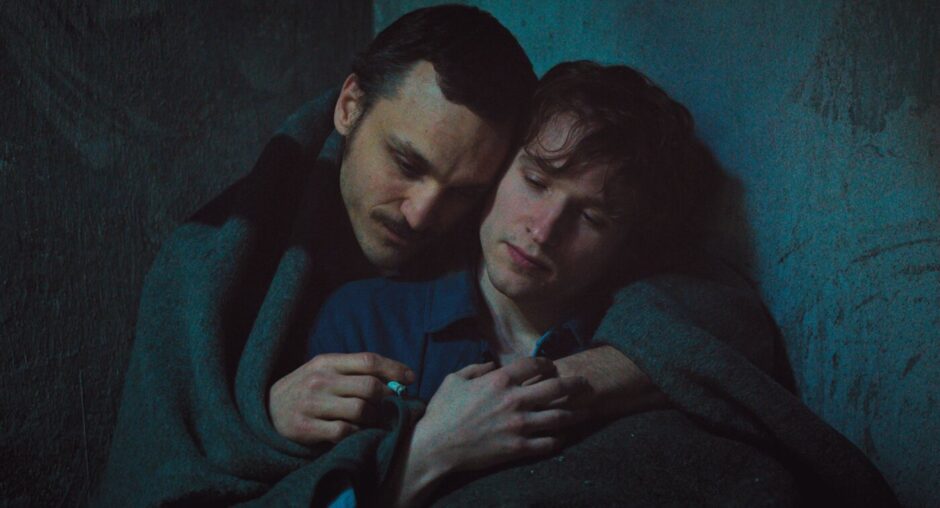 Make no mistake, though: Hans’ and all of the other inmates’ freedoms are freedoms still. They may not be as colorful and celebratory as the current LGBTQ+ community knows it to be, but their queer pride persists. It creeps in the crevices of the concrete walls of the prison, in the secret messages passed onto one’s lover, in the workstations, in the simple sharing of matches and cigarettes, in the nights spent together under punishment. In the absence of conventional freedom, queer pride becomes an act of courage, the biggest reminder of tenderness and love in an environment devoid of them.

Here we can see the queering of the prison system through small acts of affection and intimacy. What once was a violent instrument of state power is transformed into a closet where queer folks can be true to themselves. They’re already in prison; what worse punishment could they possibly be subjected to? Yes, there’s still discrimination from other heterosexual inmates, but they’re all prisoners still, differentiated only by the duration of their jail time. The film posits that the queered prison grants even greater freedom to gay men, albeit not without its own risks and dangers.

The prison as a closet is a narrative framing that is explored even further during the film’s climax. Traditionally, coming out is a narrative point where the queer character lets go of their inhibitions and accepts themselves for who they truly are. But Hans has long accepted who he truly is. He is not some young, naive gay man who still needs to discover himself. So the film subverts the coming-out scene into one where Hans is forced to face his inhibitions outside the safe space that he had created for himself. Here we see the closet’s secondary, less explored feature: a space that protects the queer person from discrimination outside their comfort zone.

In the absence of conventional freedom, queer pride becomes an act of courage, the biggest reminder of tenderness and love in an environment devoid of them.

A palpable sense of uncertainty permeates the film once it is announced that homosexuality has been decriminalized and Hans is finally let out of his incarceration. Everything is so different—the wide shot of the “free” world quickly contrasts with the tightness of the prison interior. Until this point, we’ve seen Hans become accustomed to the type of freedom afforded inside the prison. Departing from it now allows us to wonder whether the so-called freedom he gains outside is any different from the one he’s learned about inside.

True enough, when Hans finds his way to a gay bar named “Great Freedom,” he is led into an underground sex dungeon where an orgy is taking place. At this point, the film returns to the same tight shots and camera work we’ve seen inside the prison as Hans traverses the maze-like basement. This time, however, tenderness and love are replaced by a cold air of promiscuity. Hans comes to the realization that the great grand freedom of the world is not any different from his great small freedom, and with this commits one last act of agency: to return to prison.

Great Freedom’s display of Hans’ liberation is triumphantly tragic in that it is a defeatist exercise of agency, albeit honest and logical. After all, individual love and courage can only do so much against a system specifically designed to deny the basic human rights of queer minorities, and perhaps in Hans’ case, change came a little too late.