The image of Medusa, mythical figure and monster, is iconic: a once beautiful woman turned into a petrifying Gorgon by a jealous goddess, cursed with scaly skin and flesh-eating snakes for hair—look into her eyes, and be turned to stone.

Like so many women of both myth and history, Medusa is a warning. For boys who will eventually become men, and maybe later gods reckless with abundant power: beauty is a trap, sexuality is heretic, agency is dangerous. For girls who will eventually become women, yet to learn the double-edged sword of being worshiped like a goddess: piety is rewarded while vanity is punished; beauty is capital, but vanity is corrupt; and above all else, we are each other’s competition.

Competing to be seen, but not overwhelming; competing for attention, but not signaling desperation or neediness in the same act of approval-seeking. Competing to be the superlative. The smartest. The strongest. The prettiest. The kindest. The wittiest. The best. The most—but of course, not too much of anything.

Here’s what I know now: it’s a lose-lose to be anything at all, be that Medusa or Madonna, the Virgin Mary or Mary Magdalene. If you’re so beautiful that you earn the affection of a suitor like Zeus, you’ll incur wrath one way or another, be that the cruel, impartial passage of time, or the fury of a jealous Athena, and be cursed for being a whore.

If you’re cursed—that is, if you’re outcast for any reason, as shallow as looks or as deep as the metaphysical, your very soul or raison d’etre—you’re othered, wasted, disregarded, a hideous waste of space at best, invincible and forgotten entirely at worst.

Rather than trying to resolve this dichotomy of the Madonna and the whore, Anita Rocha da Silveria’s second feature film embraces hypocrisy and incongruity as an aesthetic. Indeed, Medusa is full of contrast and contradictions: alluring neon pink lights and grotesque green bruises; contemporary pop songs interpolated with angelic worship music; militarized exercises that look almost like dancing; violent exertion of control, of submission, of piety. 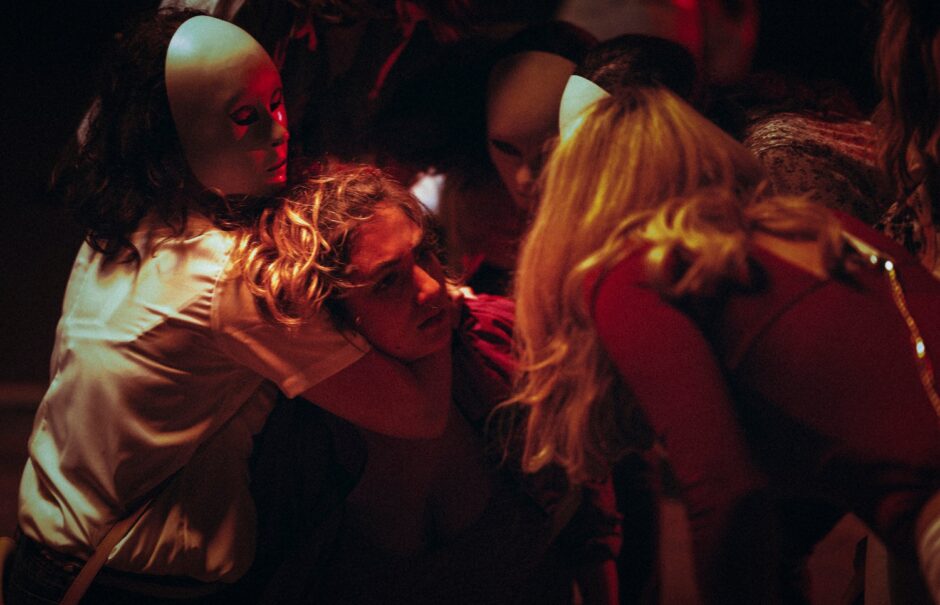 Medusa follows a group of religiously devout girls, who by day demonstrate their holy commitment through songs and video tutorials encouraging modesty, and by night form a violent vigilante gang to hunt down young women living in sin.

Who are these vigilantes? The shadowy, neon glam of Silveria’s world seems to suggest a heightened reality, one where superheroes or supervillains wouldn’t be entirely out of place. The world feels a bit like if Drive met Watchmen, but the players on stage are much more inconspicuous. Medusa’s vigilantes are not strangers, not trained enforcers of justice—they’re a group of eight or nine friends in high school. These girls are demure, priding themselves on their purity and chaste beauty, including their leader, blonde and beautiful Michele, and her best friend, Mari.

It’s a lose-lose to be anything at all, be that Medusa or Madonna, the Virgin Mary or Mary Magdalene. If you’re so beautiful that you earn the affection of a suitor like Zeus, you’ll incur wrath one way or another.

When Mari’s cousin moves in with her family, Mari introduces her to the group as their newest recruit. Around the pool, the girls sit cross-legged, as if listening to a sermon while Michele recounts an urban legend about Melissa, a beautiful actress, who was disfigured for not entirely clear reasons—for being vain? For being beautiful? For existing at all?

Mari’s cousin reacts accordingly: shocked, horrified, a bit fearful that what Michele is saying is more fact than fiction. At first, I expected the film to follow this relationship, where Mari’s cousin, the newcomer and outsider, would see what the girls were doing as “vigilantes” was wrong, and surely she’d bring them back to civility. But Silveria is not interested in the conventional anymore than she is in easy answers. Michele, breaking the fourth wall, staring head-on, challenges what the object of repulsion should be: the reactionary act of violence or Melissa’s self-loving ego? Mari’s cousin acquiesces. And so Melissa, now rumored to either be a recluse or lying comatose from her injuries in some hospital, becomes the girls’ myth, their very own warning, a test of morality.

Silveria moves from didactic parables to very corporeal, very real consequences quickly. On their next hunt, the girls stalk another woman. They surround her like predators around fresh prey, and the charge of adrenaline is amplified by the underpinnings of conventional horror beats. As the audience, we’re waiting for the other shoe to drop, for the certain jumpscare. And that catharsis comes—just not how I thought. Rather than the girls overpowering yet another victim, she fights back. Mari climbs on top of her, pinning her down, only for the woman to grab a broken piece of glass, slash Mari, and break free.

The blackness of night hides what’s been done to Mari. She stares at the camera, wide-eyed and terrified, as dark blood pools around her. Only in the harsh light do we finally make out what’s transpired exactly—Mari’s cheek has been gouged, a long cut down her once flawless cheek. Blood runs down a drain, a heavy red contrasting the otherwise bright bubblegum pink marking more successful nights of vengeance.

Almost instantly, Mari is othered. She is fired from her part-time job at a plastic surgeon’s office because her healing wound upsets the clientele. At a school-sanctioned function for the girls and boys to get to know one another, Mari is ignored, either entirely invisible or painfully visible. She’s not completely outcast by her friends, but they act a bit more distant, tiptoeing around this new evidence that they’re not invincible, immune, or immortal. Despite her apparent likeness to Melissa, Michele insists Mari is not like that kind of woman. And yet Mari knows she is no longer exactly like their kind of modest, manicured woman, either.

Cast out from the inner circle to the ostracized outskirts, Mari becomes obsessed with finding out what really happened to Melissa. Silveria delivers us to the threshold of the liminal, a suspended place between life and death: a sanatorium, where Mari begins working to take care of comatose patients. Here, no one gawks at her. Her coworkers are accustomed to dealing with much more grave realities than that of complexion concerns or virtue signaling.

And her patients, eyes perpetually closed, require a sort of tender care that humbles Mari. She rolls patients over to avoid bed sores and rubs lotion into their skin to prevent their skin from drying or cracking. This work—evoking imagery of Maundy, or the religious rite of washing feet—seems much more saintly than anything her friends have tried to claim as holy and just.

Although concerned with that which might be holy, Silveria also explores that which might be haunted. After a power outage, Mari finds herself stranded at work navigating the dark hallways to a room she hasn’t seen before. Obsessed with finding Melissa, Mari approaches a single bed draped in white curtains. The film’s volta hinges on an encounter that may or may not actually happen, but nothing is the same for Mari after. It is as if her stone exterior, first cracked by the glass cutting into her cheek, finally crumbles entirely, and she can see the world anew. 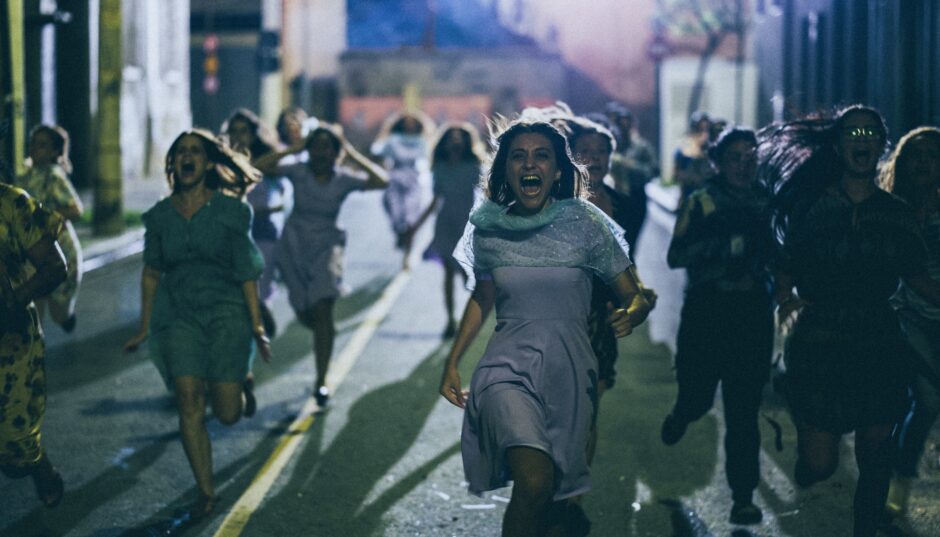 What Mari learns to see is that everyone’s suffering. Her friends, indoctrinated into believing their chastity can be weaponized, are still subordinate to their male counterparts, whose machismo drips in toxicity. Her schoolmates, who experience hysterical revelations during sermons given by their charismatic, Evangelical reverend, are being shepherded toward the slaughter of their agency, learning how to be submissive as if it were synonymous with being ethical. And those lying comatose—the sickly, the poor, the forgotten—suffer on the sidelines, ignored by those who profess loudest to care.

Something about Medusa has always reminded me of another myth—that of King Midas, who was gifted by the god Dionysos with the ability to turn anything he touched into gold. When Midas hugs his daughter, she turns into a golden statue, and so it becomes a tragedy. But the myth of Medusa has always felt much more punitive than pitiful; while Midas’ tale is cautionary against greed, Medusa is a wailing siren calling for meekness and subservience.

Silveria’s filmmaking is cognizant of such gendered double standards, highlighting hypocrisy across her characters. Medusa faces this tension most poignantly between Mari and Michele, who are bonded in friendship yet marooned on the shores of their own religious obedience. When at last Mari comes into her own, she’s determined to bring everyone along and awaken them from their stony stupor. Silveria’s girls seek release no longer through being seen—not by their reverend, not by their boyfriends, not by the expectations of their viewers, friends, and strangers—but through at last being heard.

Their long-baited cries are full of pain and anger and resilience; their yawps are anything but meek or subservient. This transformation of diminutive gazing into unbridled, unbecoming raging is stunning and shocking: loud enough to shatter stone, and brave enough to face the ones who dared to curse them into stillness.