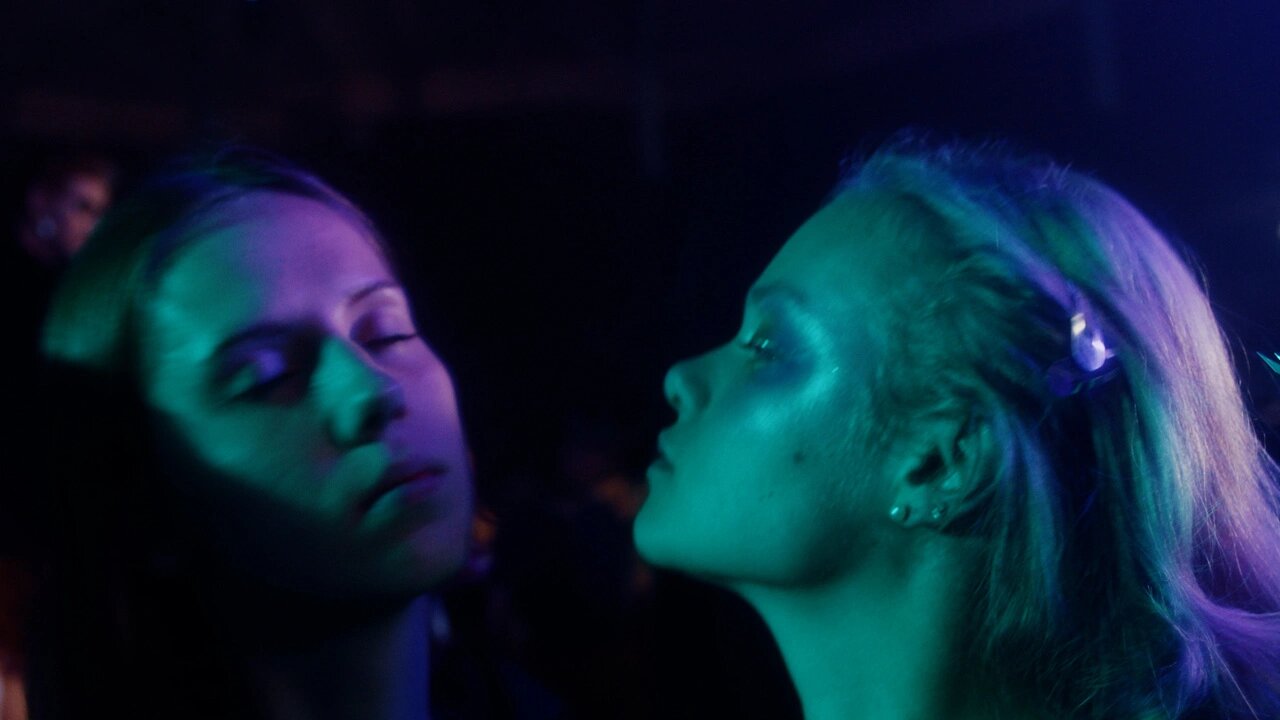 Rory DohertyI8.23.2022
Matīss Kaza Interview – Director of ‘Neon Spring’
“We tried to balance between the cinematic and the authentic.”

Neon Spring, a coming-of-age drama set in the hitherto unexplored Latvian rave scene, frequently shows its protagonist Laine (Marija Luize Melke) lost in pounding but strangely meditative music. The scenes have a documentary feel and are often filmed in long takes (two things the director has a wealth of experience in), even as the camera cants and sweeps over the young Latvian partiers. It’s incredibly immersive, with an unshakeable atmosphere that’s as easy to get lost in for the viewer as it is for the onscreen participants. It feels like director Matīss Kaza has stumbled onto every rave in the film, so authentic and intimate does our presence amongst the crowds of dancers feel.

And they had to fake every single one of them.

“This movie was filmed during COVID, in the summer of 2020,” Kaza says. “We had very low COVID levels at the time. There were maybe like a dozen new cases every day because we had a lockdown immediately, like in March 2020, so that protected us from the first couple of waves. Of course, public events such as raves couldn’t really take place with the number of people that we required. However, you could go to a rave if it was part of a film set, so all the extras in these party scenes, which we had to construct because raves were kind of illegal at the time, were actual ravers who are hungry for that party.”

But beyond staging the raves, Kaza found they had to add more artifice to the ambient dance sequences to achieve their supposedly naturalistic feel. “While the shots seem improvisational, documentary-like, almost responsive to what the characters do, we actually had to choreograph them quite precisely beforehand,” he says. “We actually ‘shot’ most of the film before shooting the film in the actual locations with the main cast. No lighting, just a simple camera.”

“But we had to do that because we had a very limited amount of money and a very limited amount of time,” Kaza adds. “We had to shoot the whole film in 18 days. So this approach was also tailored to our financial possibilities and the limitations of time that we had. Also, we knew that the fall was coming, and with the fall comes higher levels of COVID and potential lockdowns and stuff like that. So we were also running to make sure that we can still have these 300 people as extras on set!”

Filmmaking is always a process of wrangling practical limitations in order to capture the performance of sublimity, but rarely do you see it so explicitly exemplified as with Neon Spring. In constructing the raves, “We tried to balance between the cinematic and the authentic,” Kaza says. “Raves are visual when they’re outdoors and in very spectacular locations, or when they’re in places that have a peculiar geometry architecture about them. [But] just the black box with lights isn’t that cinematic. So we tried to also find something that works for the requirements of the movie, something that looks visually interesting.”

If anyone knows how to make a Latvian rave visually exciting, it’s Kaza. After studying at New York’s Tisch School of the Arts—where he directed in his sophomore year One Ticket Please, a documentary about famous Broadway fanatic Nicki Cochrane—and finishing a semester at an AFI Conservatory in LA, he returned to Europe and fell headfirst into Latvian raves. “I was just enveloped in that scene,” he says. “It’s a very welcoming, open, fun community. And because in Riga, it’s not a large metropolitan city, the art scene is quite condensed.”

It’s this intensity of intimacy that’s so exciting to Laine. As familial and educational pressures leave her disaffected and unmoored, she embarks on an exploration of identity, senses, and her capacity for connection—including her queerness. The lead performance from Melke, as well as a commanding supporting cast, brings the emotional reality of this incredibly specific community to life, something Melke influenced greatly herself as she shares a screenwriting credit with Kaza.

“So the first draft of the script was written by me,” Kaza explains. “I sent it to all the actors, and then Marija said, ‘I think a lot of this stuff doesn’t work, but I can help you!’ And I said, ‘Okay!’ Then we workshopped the script with the actors, and we did a lot of additional research and a lot of improvisational exercises. We worked as if we were doing devised theatre.”

Rather than just mimicking reality, Neon Spring tells a compelling story about disenfranchised youth finding freedom in unorthodox, underground communities. Laine and her friends losing themselves in music contrasts with stiff, awkward scenes at school and fraught family peace at home—the implication being that rave music is therapeutic and liberating as it fills your ears and pounds into your soul.

“I think that the peculiarity of techno music, and of the experience of being in that crowd, is that supposedly you’re in a public space, but you’re actually in a very personal inner space. And that has to do with this concept of ‘the vibe,’ right?” Kaza says, referencing the ubiquitous Gen Z descriptor. “And if you catch the right vibe, you can go into a very, very deep kind of trance, a process of exploring yourself. And I think it has to do with the fact that this music doesn’t have a lot of verbal information.”

I think that the peculiarity of techno music, and of the experience of being in that crowd, is that supposedly you’re in a public space, but you’re actually in a very personal inner space.

In one gorgeous example, after Laine clams up during oral exams, we see her swaying at an intimate rave and spontaneously generating a lyrical monologue that overlays the music. Kaza wanted to show how rave music provides a different, comfortable context that can shift your state of being. “It’s very rhythmical, it’s very shamanic in that sense, like the ancient rituals that would use the drums and rhythmic repetition. That’s why this kind of experience can be therapeutic. And, of course, you can say that it’s escapism, but I think psychologically it can be therapeutic and it can open up unexpected aspects of your personality.”

Neon Spring is a film that empathizes, not moralizes. Still, in his familiarity with the community and subsequent research with the cast, Kaza thought it would be disingenuous to not show the dangers young people encounter there. “It’s a wonderful scene, the rave scene, and it’s essential to queer communities in many different countries. And it’s also a very progressive scene, like, it’s always forward thinking about how to be more inclusive, more democratic,” he explains.

“On the other hand, there’s also going too far with drug abuse. And there are friends of the cast that have passed away because of drug overdose, or just not being able to mentally cope with the consequences of drug use. While you’re on [the drug] MDMA or whatever it is, it can be a constant high, but the day after can bring up so many depressing thoughts. Not everybody is able to cope with so many of those raw, dark emotions.”

Predators linger throughout the film, preying on vulnerable young women, and in the case of one incredibly distressing scene of sexual assault, drug dependency leaves victims and bystanders paralyzed to intervene. One character leaves the film after a traumatic incident. “There’s just so much that can’t be expressed in words in terms of how horrifying that experience is,” Kaza says, in regards to early plans to bring the rape victim back into the story. “I think we just wanted to leave it at that because that feels more honest to us.”

Neon Spring is comfortable not spelling out the future of its young characters, but it’s always clear they’ve learned more about themselves and how they can connect with others. Kaza has given some thought to where his ensemble ends up. “I think that some people grow out of that and leave it as a youth experience, a period of exploration in their lives. And then you go to those raves and you see those 40-something, 50-something, 60-something, 70-something ravers.” He pauses, then grins. “And those are the real guys.”