Jason Tan LiwagI10.31.2022
Piggy: The Horrors of the Fat Body
Piggy takes Carlota Pereda’s short film of the same name and expands it to examine the horrors placed on the fat body — both in and out of cinema.

On a hot and sweaty summer afternoon, Sara stares at a gorgeous boy outside of her family’s butcher shop while she eats strands of her hair. Her reverie is broken when a childhood friend, Claudia, suddenly enters to pick up a purchase placed by her mother, with a friend in tow taking pictures. Unaware of the rift between Claudia and her daughter, Sara’s father urges her to join Claudia at the Madrigal festivities. Claudia only smiles politely, rushes out after paying, and returns to her group of friends, all of whom begin to erupt in laughter. Sara pulls up her phone and discovers that she and her family are the subjects of ridicule on Instagram—a photo of the three of them posted by Sara’s friend with the hashtag: #LosTresCerditos. She rushes into the deep freezer, attempting to find solace in other meats.

The beginning of writer-director Carlota Pereda’s Piggy is the stuff of nightmares of fat people everywhere (including myself). Sara, embodied by Laura Galán, is reasonlessly and relentlessly tormented online and offline by Claudia’s friends—waif-thin women seemingly lifted from an Avon catalog, all of whom insist on calling her “Piggy.” When they later fail to drown Sara in a river while she is swimming, they take her belongings instead, leaving her to walk home in only her bathing suit as a cruel joke. But when Sara discovers that they’ve been abducted by a serial killer, she is faced with a monumental moral dilemma. Unable to make a decision, she pees herself out of fright. In a moment of unexpected empathy, the killer (played by the enigmatic Richard Holmes) gives her a towel to cover herself up. He drives away. 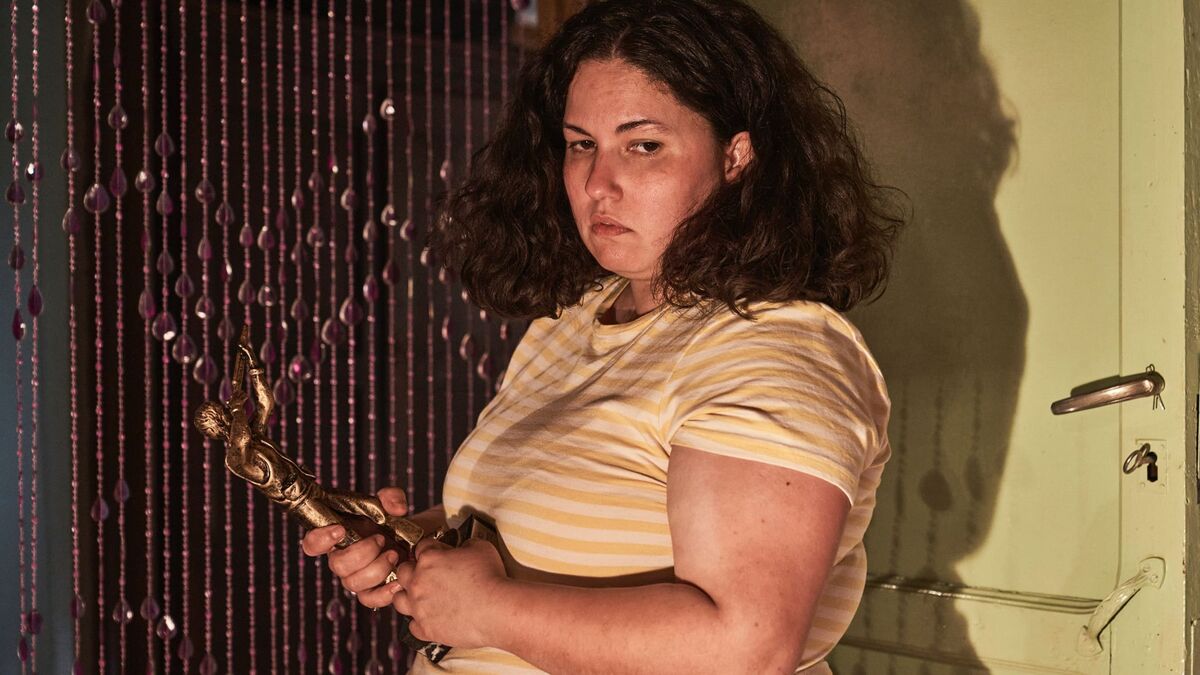 The first 20 minutes of Piggy are almost a direct reconstruction of Pereda’s Goya Award and Forqué Award-winning short film of the same. But whereas the short film ends with harrowing karmic retribution, Pereda’s feature resists resting on these laurels—opting to examine what shapes Sara’s moral compass and self-perception. Why would she save these girls who have been nothing but terrible to her? Why would she report a man who has extended her kindness at her lowest, who has saved her from her bullies? In the film’s decision to delve deep into the reasons for her inaction and the ways the guilt creeps long after, Sara is forced to reckon with her relationship with herself, her surroundings, and her body.

In an editorial piece titled “Fat as a Death Sentence in Horror,” writer Hannah Ogilvie enumerates the many ways the fat body has been subjected to cruelty in both reality and fiction—from medical negligence and financial inequalities to public discrimination and filmic erasure and misrepresentation. The fat body has always been a source of repulsion, and the deaths of fat people onscreen—from the nameless glutton in David Fincher’s Se7en to the many women victimized by Buffalo Bill in Jonathan Demme’s The Silence of the Lambs to the double-crossing slob Dennis Nedry in Steven Spielberg’s Jurassic Park—seem like necessary (and deeply satisfying) comeuppance.

Writers Nico Bell and Sonora Taylor echo Ogilvie’s call for “positive representation” of fatness in media, specifically in horror. However, Pereda, whose prior short films Las rubias (2016) and Habrá monstruos (2020) similarly inspect how insidious behavior is masked by glamour and beauty, refuses to follow such binaries, aware that merely depicting Sara as an empowered obese woman ignores the structures and strictures responsible for ostracizing her.

Instead, we first see her suffer. Not from her fatness alone, but from her dishonesty. Galán embodies Sara’s deep-seated shame in every mundane movement: in how she clings to her towel even in the absence of strangers, in the hurried manner by which she consumes treats after being reprimanded, in the ragged breaths she takes as she attempts to regain her possessions and the control in her life, in the way she curls her posture and obscures her frame to hide her folds. In allowing room for Sara’s self-loathing, the film enables us to understand the destructive ways she and the girls around her are shaped by the oppressive hand of their overbearing mothers.

Piggy’s form reinforces this suffocation, specifically in the decision of cinematographer Rita Noriega to frame everything on a tight square ratio. Like in Laura Aguilar’s radical self-portraits, Noriega and Pereda accept that Sara’s body takes up more space, cutting her figure up at times and removing the landscape in most shots, forcing the audience to focus on Sara’s body and face, simultaneously presenting her unraveling as a claustrophobic jaunt and, ironically, an Instagram post.

But Piggy’s most interesting draw is how it ties together ideas of fatness, desire, and filial disobedience. When Sara makes contact once again with the unnamed killer, neither of them resorts to violence. Instead, the two share a quiet and intimate moment in the dark, with fireworks from the Madrigal festivities tinging the interaction with a romanticism that purposefully leaves a bad aftertaste. Repression within the household infantilizes Sara and has trained her to be a passive observer of her own life. The promise of sexual liberation and of genuine care, even at the hands of a proven serial killer, is enticing enough to encourage her to lie to the police and rebel against her matriarch. 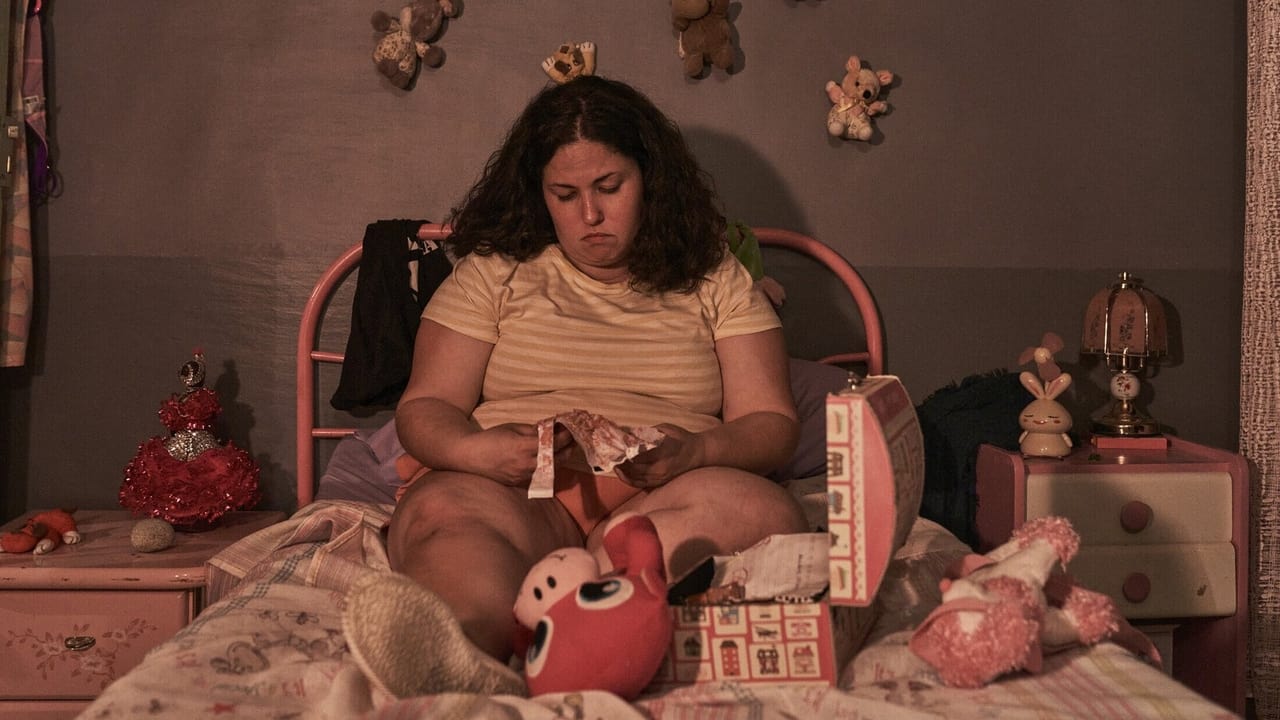 Only when physically confronted by the consequences does the weight of her actions and inactions dawn on Sara. Trapped in a butchery, Sara and her tormentors are transformed, cinematically, into pigs scurrying about and hanging from the ceiling awaiting slaughter. In Anna Mirzayan’s essay “Why Does the Art World Hate Fat People?,” she argues that there is a need to “claim fatness as a public identity” as a necessary part of coming to terms with one’s self-image and self-identity. So when Sara begins to accept the labels put upon her by behaving like a wild boar, her animalistic outbursts are unexpectedly cathartic.

Piggy lacks the gratuitous gore and gleeful self-satisfaction that die-hard horror fans often seek and expect in revenge thrillers such as Ready or Not and the I Spit on Your Grave franchise. Much of this type of media allows space for us to satisfy our cravings for blood and justice. But only when Piggy concludes does this lack solidify as a purposeful artistic and political decision. By grounding her film in reality, Pereda condemns the many acts of violence that are inflicted upon these girls by their environments—only occasionally showing it to viewers so they may understand its machinations.

Following the footsteps of many “final girls” before her, Sara’s coming-of-age soaks her baby pink apparel in dark and rich reds. She walks out of the barn and onto the road, with conviction in her eyes, her posture straight despite exhaustion. Sara’s final act in the film is her first step towards womanhood, a sign of true maturity: She seeks help.

Piggy had its international premiere at the 2022 Sundance Film Festival and is currently available via VOD.