Natasha JaggerI12.1.2022
So Yun Um Interview – Director of ‘Liquor Store Dreams’
“When you're young, you just see so many injustices and you just want to change the world somehow. I thought about how I could use the medium of films to really change people’s opinions.”

As we get older, we see the world from a wider perspective—and with that we see our relationship with our parents drastically change in many ways. Liquor Store Dreams, the feature documentary debut from Korean American filmmaker So Yun Um, reflects this with a humane and honest approach, tackling political discussions and lifelong dreams.

The film is intimate, focusing on two Korean American children of liquor store owners who are attempting to bring together their dreams and those of their immigrant parents. Highlighting the struggle for racial equality within Los Angeles, and in particular Skid Row, Liquor Store Dreams—which had its world premiere at the 2022 Tribeca Festival—provides an insight into real-life family progression and the tough conversations we may have with our parents in an ever-changing society. We caught up with So Yun Um at the British Film Institute’s London Film Festival last month. 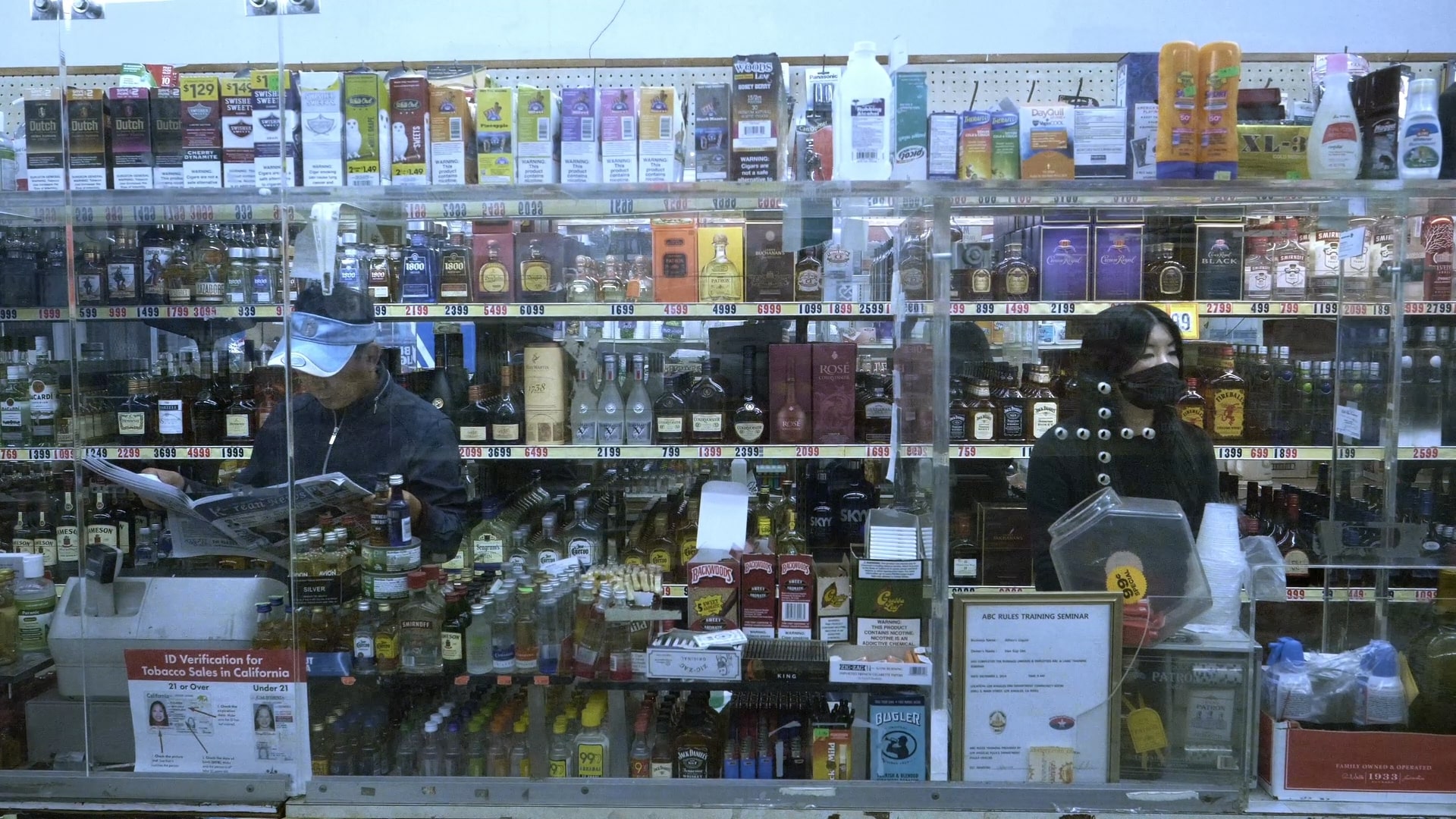 Projektor: Liquor Store Dreams is autobiographical of your life and the lives of your parents. Was it hard to delve into that or was it something you’ve been craving to open up about?

So Yun Um: Maybe because I grew up in the internet age, I felt pretty used to it, like showcasing my life and filming it. But I guess in a different sense as it’s a feature-length documentary. So I think for me, it was like, how can I be constructive? What’s the story here? Because I have the most access to my life and the people in my community, how can I best present it? Because obviously I’m living my experience and people are kind of getting a crash course of my life, I would be really strategic and intentional about what I film and I’m protective of, especially the people that are in my movie. It was quite challenging sometimes, but I think it helped working with my editor Christina Sun Kim [who helped] me find balance in terms of my personal life and what benefits the film.

What I find endearing about this film is how open you’ve made it. For example, allowing us, the audience, to explore your relationship with your dad, his opinions, and his history. Did it take a lot to convince him to be a part of this project?

My dad has been pretty open about it, about everything. And I think before I filmed, obviously, I told them you are going to be on camera, you are going to be sharing your experience and opinions to the world, so obviously be conscious of them. But for him, he’s almost speaking his own truth. He doesn’t see anything wrong with that. I’ve always said that my dad is like a natural-born star in a lot of ways. Just having this film and being able to make it, I was able to have this deep conversation with him and really share these moments in our lives. It’s kind of a deeper look into our growing relationship.

For sure, yeah! I feel like we don’t have that many opportunities to really talk to our fathers as much as we would like to just because they’re working so much, or they’re just busy dealing with their own stuff. So I think that making this film really gave us that space to have these difficult conversations and talk even more. Prior to filming this, we were having very brief conversations like, “Hey, did you eat?” “How are you?” “How’s school?” Very basic conversation. This was probably the first time I was really able to delve in deeper and get to know him as a person.

Filmmaking always seems to have been a passion for you. How did it come about?

I feel like this is a corny answer. When you’re young, you just see so many injustices and you just want to change the world somehow. I thought about how I could use the medium of films to really change people’s opinions, inform them, educate them, as well as [give them] an experience. Because I love watching films and being so compelled by them, I was like, how can I do that to other audiences and bring them into my world?

Your dad mentions in the film that he wanted you to have a normal job. Has he changed his opinion on that?

He’s seen how much people have resonated with the film and the success of it that he does think differently. Prior [to filming] he was saying don’t do it, don’t do it. Now that he’s seen it he’s glad that I did it and that I didn’t listen to him. For me, I think I just had to persevere and push through.

We don’t have that many opportunities to really talk to our fathers as much as we would like to just because they’re working so much, or they’re just busy dealing with their own stuff. So I think that making this film really gave us that space to have these difficult conversations.

You say within the film that Spike Lee’s films helped influence you. Can you tell me more about that?

What I love in general is that everything he makes is about a topic that’s so important to him, as well as important to the world. He had his own aesthetic and flair that is really engaging and cinematic. For me, when I think about the medium of film I want it to be really engaging and educational, and able to transport [you] into another person’s shoes or perspective of the world. He probably does it the best. I’m really inspired by his work and the stories that he chooses to tell. I hope that I can do the same.

There are a lot of political elements to this film, with a lot of honest opinions. What struck me was the open discussions that came around following what happened to George Floyd in 2020. How did you feel while filming these scenes?

Oh, that was so scary. I think we never talked about political issues prior to that moment and so I kind of suspected where the conversation could potentially lead. But I had no real idea where we would end up, and that was probably the first time we really had that big conversation. It was really scary to even ask those questions, and then bring up the big elephant in the room, whether it’s regarding our own community and the prejudice that we feel. I think no matter what we are talking about, whether it’s personal or political, it’s really scary for people.

The relationship between your friends Danny and Mark is lovely to watch in this film and refreshing in many ways, again due to the honesty they both provide. How did you feel witnessing that personal story?

There was so much trust between me and Danny, but I didn’t know where his journey would lead to, his mother’s journey, and what information they would provide me. So there were a lot of times where I was so shocked that they would be so willing to share such personal history, background, and insight to their life that they probably wouldn’t have shared with other people. I felt a lot of responsibility—how can I amplify their story? Because they’re telling me for a certain reason, whether it’s because they’re trying to heal themselves or whatnot. But also, how do I integrate it so it feels seamless and part of their narrative? 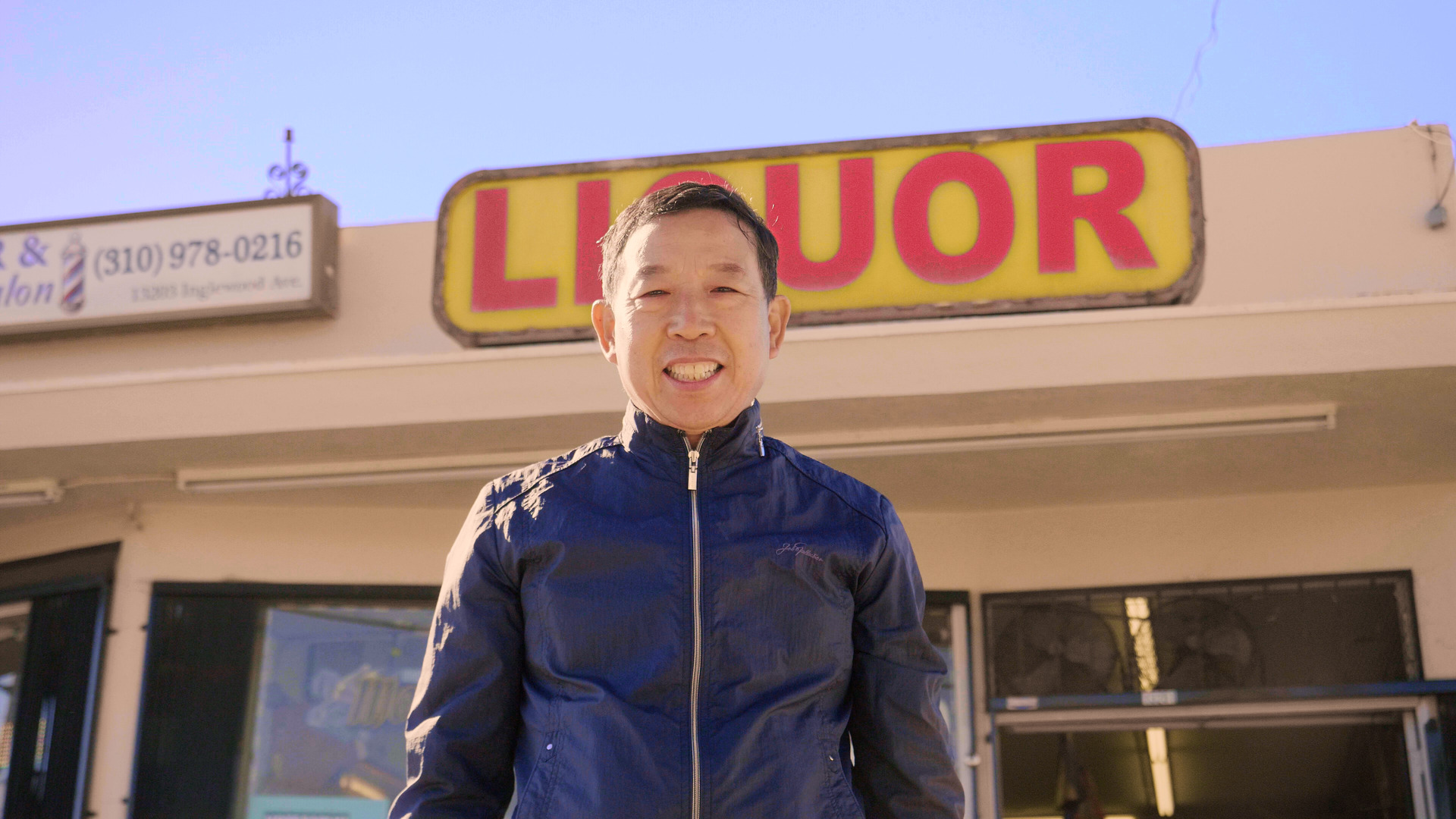 Mark mentioned how he was happy to be back working at the liquor store again, but he was still homeless. Do you know how he is doing now?

I think for both Mark and Danny, after the pandemic was probably the hardest for them emotionally, particularly, and financially. I think now they’re taking a lot of steps to implement certain routines in their lives to really help them because Skid Row is such an emotionally draining area. To work with the community every single day and create actual change is so tough. It’s about bringing communities together.

What was your main goal when making this film?

What’s your advice for anyone wanting to develop their relationship with their dads?

Baby steps. Because not everyone has the relationship I have with my dad, which is pretty open, other people might not have that existing relationship. It takes years and years to really get to know your parents and have them get to know you. It’s hard.

Liquor Store Dreams has been really successful. What’s next for you?

I want to do everything. I feel like, as somebody who loves film, television, and media, I would love to do both narrative and documentary films and television shows. Prior to this I was actually working on a narrative feature film, so I think I’m going to go back to the drawing board and see how I can make that so much better than I ever imagined. Because this film is about me and my father, I want to make something about the relationship between a mother and a daughter, because I do think it’s very different. It’s challenging being a woman.