Renee CuisiaI12.29.2022
Alcarràs: Home is Where the Land Is
In Carla Simón’s Catalan drama, a family of farmers fight to preserve their ties to land, livelihood, and each other.

In the opening scene of Alcarràs, young cousins Iris, Pau, and Pere pretend that the decrepit vehicle they’re in is a spaceship taking them too close to the sun. “I can see an alien from here!” one of them cries. Midway through the film, their parents, siblings Quimet and Gloria, make a similar claim as they dance along the same patch of land—their land, Solé land, handed to them after Quimet’s peasant grandfather kindly took in a wanted landowner at the height of the Spanish Civil War.

“There are UFOs up there,” Quimet says pointing at the sky, sounding like a giddy boy who may as well have been in the car with the kids. But we’re catching Quimet at a rare time. Usually reserved and deep at work on the family farm, he’s now laughing and singing with careless abandon. In place of being sun-drenched, he’s now glowing under the moonlight. Gloria joins him, and for a while, they’re untroubled.

For years, the Solés have farmed and danced and dreamed on this fertile land. The peach orchard they call home provides the family with a decent livelihood and the small Catalan town of Alcarràs with fresh produce and seasonal jobs. Theirs is a community that has happily lived off the labor of its co-ops and workers, but now a landowner—the progeny of the same one the Solés protected all those years ago—is threatening to disturb the peace in the name of modernization. Young Piñol, as he’s called, wants to install solar panels all over Alcarràs; never mind that it’s agricultural property, or that people’s lives depend on it. Legally, the Solés and their neighboring farming folk don’t have an actual claim to the land they till. With no title nor contract to speak of, just “Old Piñol’s word for it,” there’s not much they can do about the urbanization that’s coming to bulldoze its way through. 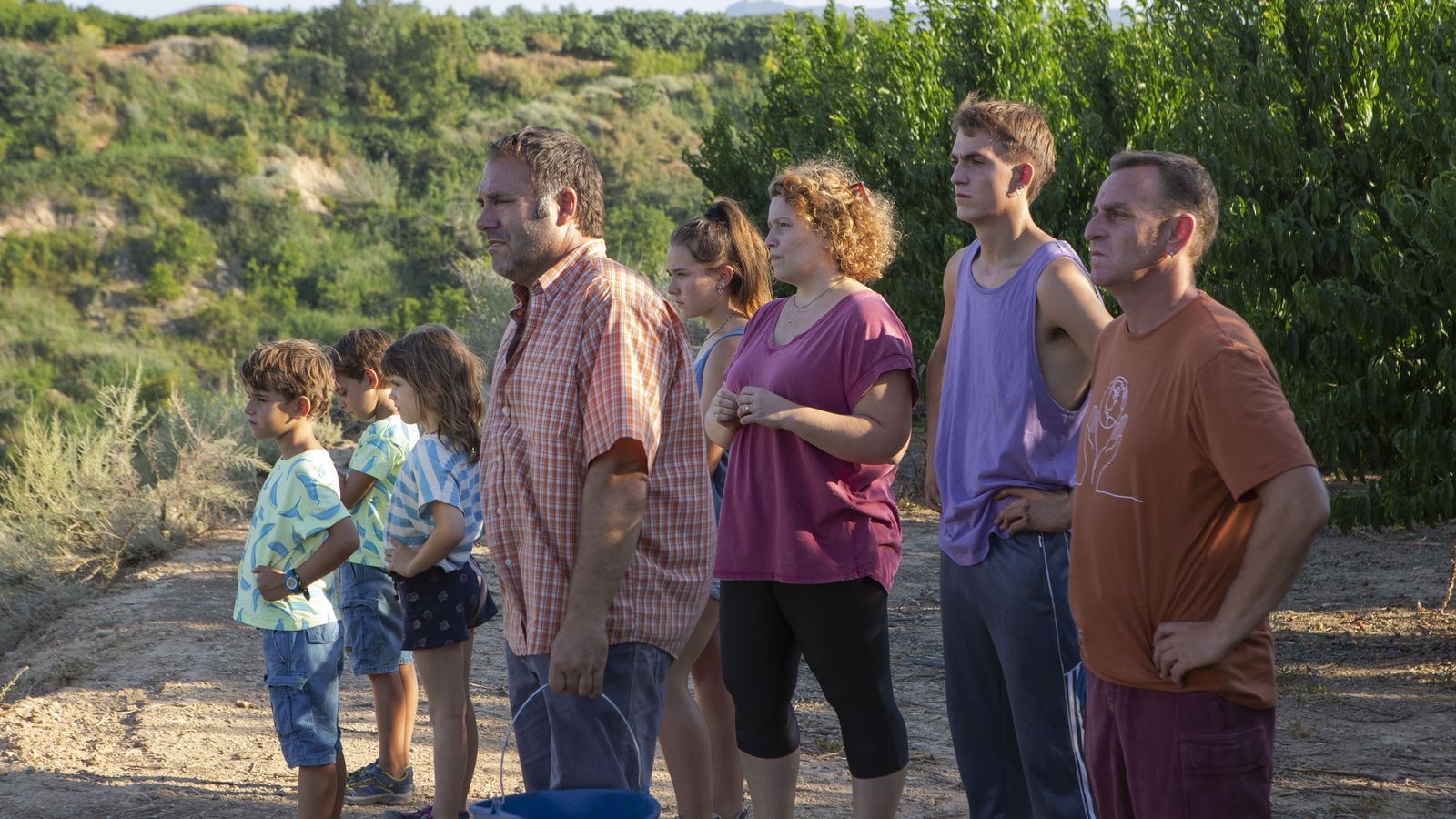 On one level, Alcarràs is a story about land, about how inextricable it is to livelihood, about how ownership of it has bred conflict since time immemorial. One of the songs the eldest Solé teaches his family (which they repeat in earnest throughout the film) goes, “I don’t sing for myself, a clear sky, or a sea breeze. I sing for my land, solid ground, beloved land.”

Director Carla Simón emphasizes this even more by hiring actual Catalan farmers as the leads. We’re not just watching the Solés sing and fight for their land, but Alcarràs natives who are also very much at risk of losing what’s theirs in real life. The acting comes off as natural because it is. You can see it not just in the expertly picked peaches and the easily lifted crates, but in the furrows of their brows whenever talk about eviction comes up, as well as in their frowns as corporations loom closer and closer to their turf. Then, the movie takes on a documentary-like quality, reminding us that these are real troubles faced by real people.

But on another level, Alcarràs is also a story about family, in particular about how family ties run so deep, they’re bound to coil around each other under the ground they’re rooted in. Which is why for a while, it’s not made clear whose children are whose. Is Iris an elder sister or a cousin to the twins, Pau and Pere? Is Roger Quimet’s son or Cisco’s? Mariona seems so close to everyone, she could be anyone’s sister, niece, or daughter. Meeting the Solés is like seeing a family photo for the first time. You know they’re made up of smaller, separate clans, but until someone tells you who’s who, it doesn’t really matter: they’re just one big happy brood.

Sometimes, this is cause for concern. The lack of an identity outside the family can bug anyone, but teenagers especially, who are on their own quest for self-discovery. So it makes sense that adolescent siblings Roger and Mariona try to do their own thing at one point—he by sowing plants other than peaches, and she by running off elsewhere during a function—much to the disdain of their father. Meanwhile, their Uncle Cisco jumps ship by applying for a job at the solar panel company, and Aunt Gloria, it’s later revealed, has long moved outside of Alcarràs and only visits from time to time, presumably to preserve the peace she’s found elsewhere. (It’s a testament to Simón’s direction that none of these moves are glorified nor villanized; they’re just shown as is.) 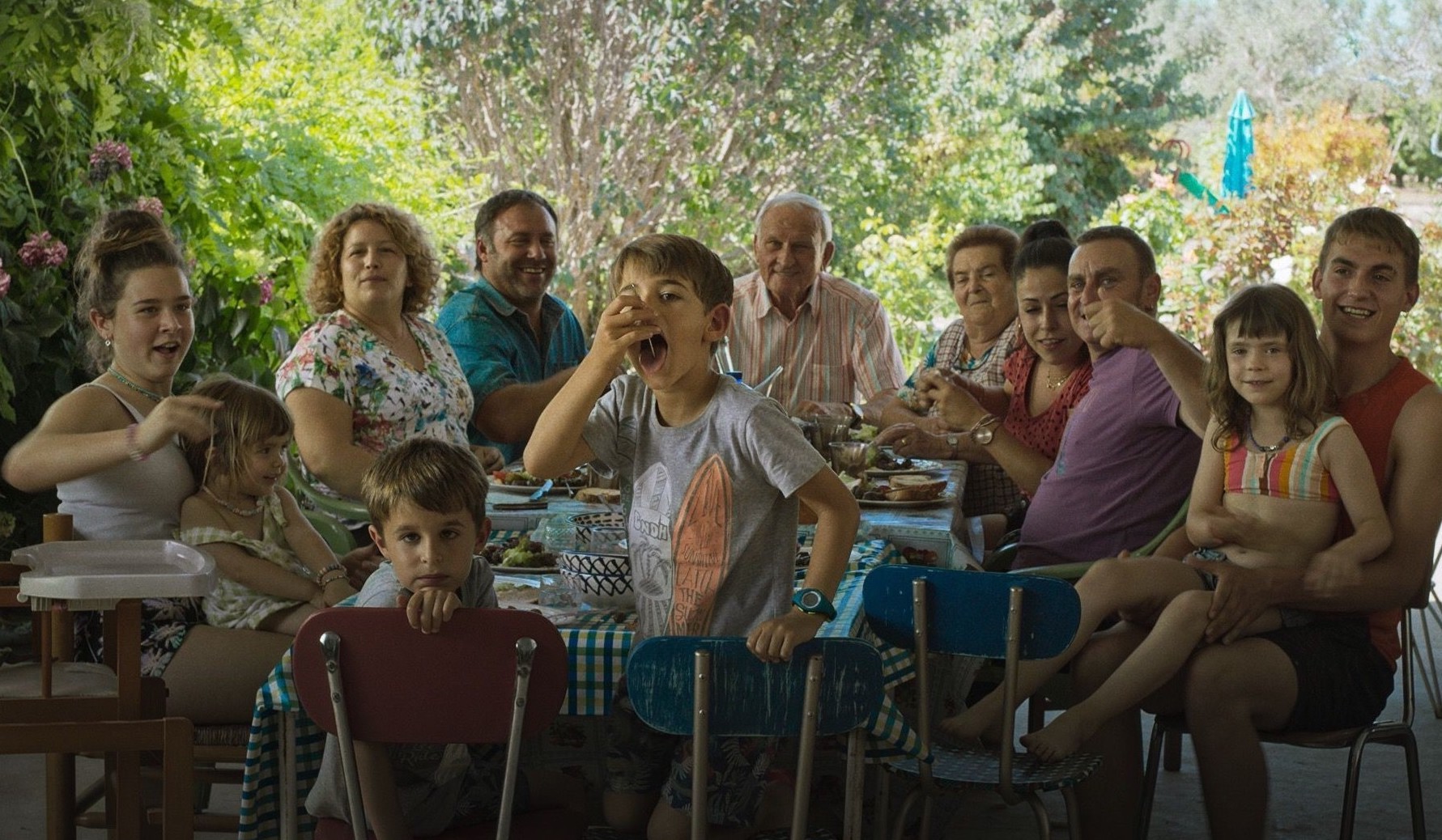 Other times, however, their closeness seems like the most joyous and natural thing to exist in the world. A balanced storyteller, Simón knows when to show us the other side, the tender side, of this tight-knit family. Whether it’s a simple moment where the kids stack against each other on a small bed and help their mother pick what to wear, or a grand scene where the entire family lovingly pushes food at each other’s throats (utensils be damned), it’s clear that at least during these instances, labels are irrelevant. Clans are irrelevant. In fact, individuality is irrelevant. Here, they’re all just Solés, raised by the same padre de familia, singing the same song.

And that song about land, by the way, has a second chorus to it, which the family switches to at various moments in the film. This one goes, “I don’t sing for my voice or the new day. I sing for my friend, who lost his life for me.”

It could be said that this dual-chorus song about land and family is what the whole movie is about. In the Philippines where I’m from (coincidentally, a land colonized by Spain), we have a saying that goes, “ang lupa ay buhay,” which means land is life. So when land is taken, life is taken—one cannot exist without the other.

I imagine it’s the same in the town of Alcarràs, where you can’t seem to talk about one without bringing up the other. The people make the land valuable, and land gives life to the people. Divorcing the two is what drives the family into conflict in the first place since they need to come together in order to make a home.

But what is home, anyway? It’s a messy place that you’re at once trying to get away from and stay rooted in. This essential clash, along with the brilliant realism lent by an authentic cast and crew, is what makes Alcarràs feel so alive.

The Solés weren’t imagining things when they warned of incoming aliens. Solar panels, shiny businesses, lifeless corporations—these are all, in fact, extraterrestrial concepts that threaten to destroy the living, breathing, and resisting town of Alcarràs, which a number of families are privileged to call home.