Xuanlin ThamI11.10.2022
Ann Oren Interview – Director of ‘Piaffe’
“I think a lot of viewers understand image manipulation when they see it, but with sound, it's so manipulative. That started my wish to make a feature film.”

A meek young woman named Eva (Simone Bucio) is learning to become a foley artist. Her first assignment is to sound design an advertisement featuring a horse—all while a horse tail grows out of her lower back. The maturation of Eva’s artistic and bodily instincts leads her to escapades of self-discovery, which include drawing in a fern-obsessed botanist into unlocking her submissive desires. The breathless sensuality of a scene where he slowly caresses her with a rose, all while musing on the hermaphroditic reproductive cycle of ferns, is delirious to experience; it’s matched only in erotic power by their second rendezvous, where he asphyxiates Eva by wrapping her shiny black tail around her own neck.

Cinema works in the realm of image and sound, and both are curated with such intense attention in Piaffe that another sense comes to the fore entirely: touch. The botanist’s hands slowly tensing on his thigh as he observes his ferns, the luscious satin finish of Eva’s red lipstick, or the sound of a hairbrush slowly combing through her tail—never has cinema felt more like skin contact between the screen and the viewer. We speak to Ann Oren about crafting this sensual and wildly imaginative cinematic adventure. 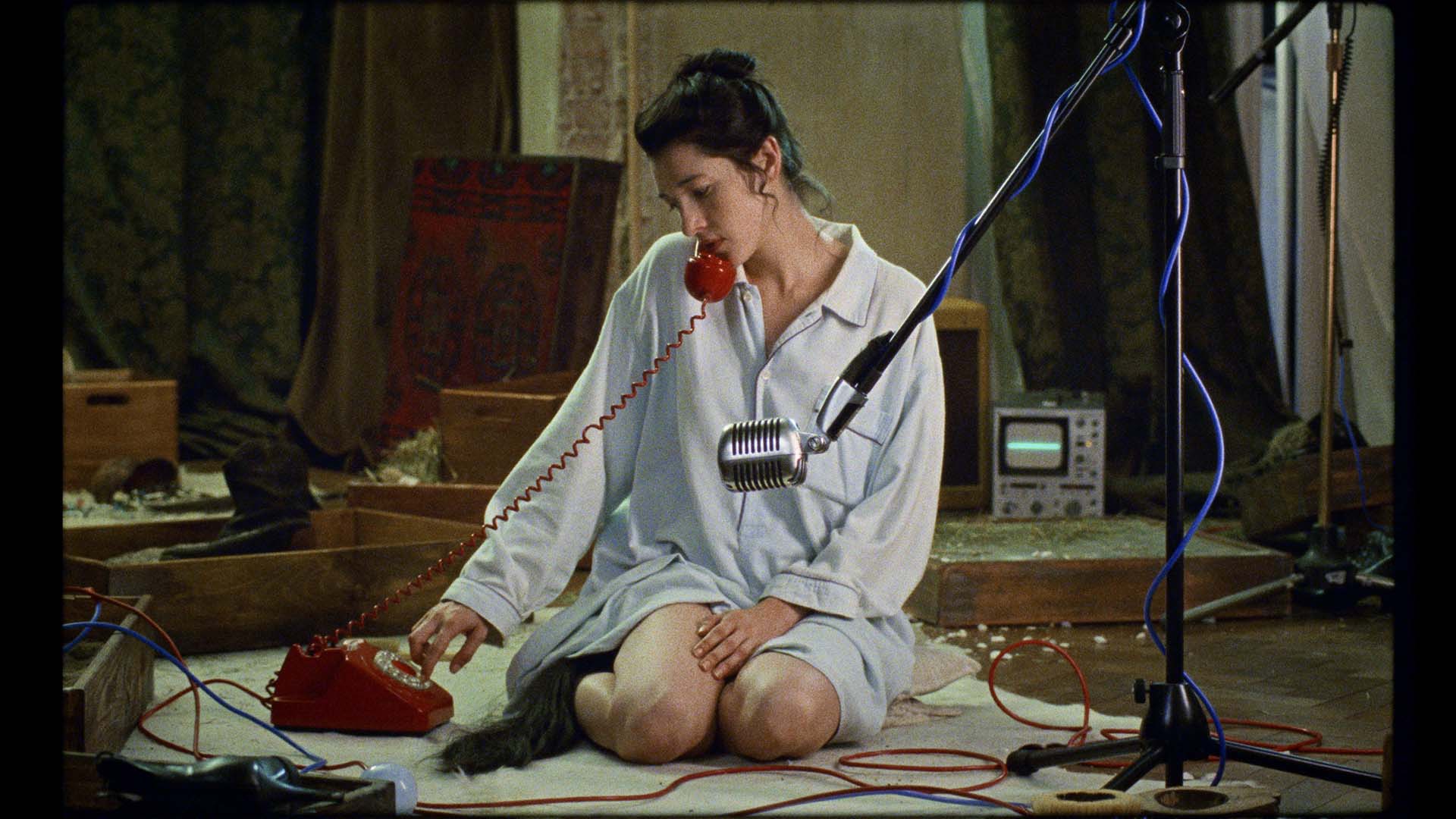 Projektor: You worked in the mediums of video art and installations before going fully into cinema. What sparked this transition for you in your artistic journey?

Ann Oren: Many years ago, I did study film. But at the time, I felt that the viewer-director relationship had been the same for so long, and viewers were treated too passively. It took me a long time to feel ready to find my own cinematic language.

I was also familiar with horse rider psychology and dressage, and mixed this with sexual games of control. It took some time for these things to cook in my head. I think a lot about the cinematic viewing, and I wanted to make a film where I would work with the body of the person in the cinema. I wanted to make a really visceral journey, and work with sound in a particular way. I think a lot of viewers understand image manipulation when they see it, but with sound, it’s so manipulative. That started my wish to make a feature film.

What’s interesting about this character is that you’re not only seeing her foley, you’re seeing her learning how to foley—and what’s amazing about this profession is that it’s kind of DIY. Every foley artist has their secrets on how to make the sound of a horse walking on hay. You can do it in many ways; you just need to close your eyes and imagine. And because Eva doesn’t really know how, she’s doing a very literal job in the beginning. She sees hooves, so she takes shoes; she sees a chain, so she takes a chain. But then, she goes to the stable and she feels it. She hears the nuances.

About horses… a lot of bondage accessories, they’re very similar. They’re extremely attractive objects. To make foley, you do it with your body, with objects, with touch. There is something very sensual in this process. Being in a dark room for so long, that also really opens up your imagination. That goes back to the sexual fantasy.

To make foley, you do it with your body, with objects, with touch. There is something very sensual in this process.

The sex scenes between Eva and Dr. Novak contain such dazzling imagery. How did you come up with these images? And also, why does she choose a botanist to start an affair with?

I thought that for her to be curious about somebody, they would need to be an expert in something. He has an attraction to something that is very non-normative, and this excites her. Also, I wanted to have the animal-plant-human world in the film captured with the same sensitive eye and ear as the people.

Actually, the rose scene was the first one that I wrote. I had this idea of a daring sexual play that I’d not seen before, with the rose being the biggest cliché of romanticism. And the self-choking—I had this image in my head of Isadora Duncan, who choked on her scarf. I thought at one point [Eva] needed to get choked. Developing the story, it made sense to have it as like a sex play, not through violence or by accident. I think it’s very sexy, because it would make her entangled in her own body.

The ferns that I picked for Novak were because I was looking for plants that were similar to the horse. The horse, during dressage, curls its head; the ferns also grow out of a coil. So at first, it was a visual parallel. But also, the reproductive cycle of ferns: they’re like self-fertilizing hermaphrodites, so I thought it was an interesting choice.

Going back to the dynamics of control and submission: you’ve described your film as Eva luring him into a game of submission. It reminded me of Steven Shainberg’s Secretary.

Ah, I saw it many years ago. I should watch it again. With James Spader?

Yes, with James Spader! Your film also depicts the submissive as having power over the dominant. Eva is submissive, but she’s in control. She initiates the courtship, and when he can no longer satisfy her, she discards him. How did you conceive of the sexual dynamic between them?

The dynamic is all about intuition and a flow of energy. When Eva gets some confidence, starting this job and growing this tail, she’s developing new intuitions, new darings—and it gives her power. Even in the beginning, when it’s a naked tail and it’s not particularly sexy, it changes something in her. Then she meets him. She has a body that she’s trying to discover, and she needs another person for that. He strikes her fancy, so she courts him. But I think what really speaks to her in this exchange is that he’s very creative with how he plays with her: he’s really more interested in giving her pleasure than receiving pleasure, and that suits her very well.

So the first time, she comes to him. Then she invites him to her place, and then he also does something that really excites her. She’s overwhelmed with it, and she thinks, we need to up the bar—it’s more about the thrill for her, more about the discovery than the emotion. But then, the next time that she leads him to where she thinks they can play, he tells her that he’s in love with her. It really breaks the fantasy that she had of him, the idea of this affair she had in mind. 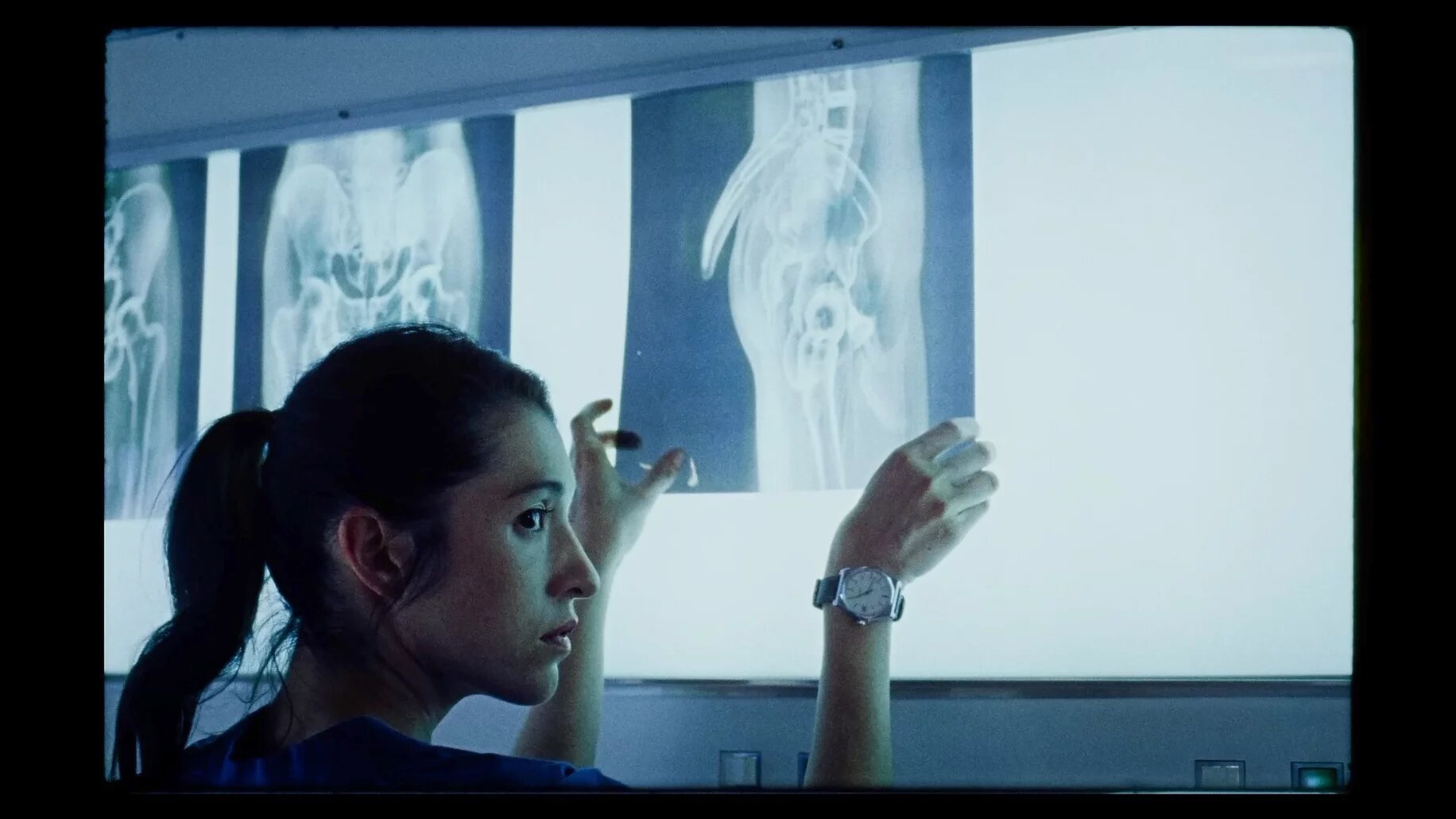 The non-binariness of Piaffe is beautiful. There’s Zara, Eva’s non-binary sibling, and Eva herself who is a non-binary human-horse hybrid, and Dr. Novak’s hermaphroditic ferns. Why this focus on “unstable” categories?

I didn’t try to stipulate non-binariness; I’d rather show how, potentially, everyone could be anything. Gender identity is something specific that one has to define for themselves. These basic categories are not so important, and they could be fluid throughout your life, but I’m not making the film about that. It’s just the way things should be looked at. Somebody asked me if Eva is a woman, and, yeah, but she’s trying to figure out what this means. Even with her courtship style, she goes with a reversal of what you normally see in cinema. And there’s something non-binary with Novak [too], I would say. Gender is just so, so open that it almost calls for the lack of necessity for definition.

Watching Piaffe is the closest I’ve ever felt to being able to touch the objects on screen. How did you craft such a deeply evocative experience?

It was very intuitive. I think the thing that really pushes this experience is the sound. There was a lot of foley work; I wanted everything so specific, so I directed the foley art, and I was very involved working with the sound designer and the person who did the sound concept. Again, with images you can say, “Oh, these things are put in front of the camera, this film stock is used, this light,” but with sound, you don’t even know how it was made. Maybe if you listened to it 10 times in a scene, you would see it. But it really… it makes you feel.