Emil HofileñaI6.22.2022
Philippine Cinema’s Tradition of Protest
The 1976 film Once a Moth is just one of many Filipino classics that protested martial law just by existing.

In 1979, 20,000 Filipino workers from several United States military bases in the province of Pampanga and in Subic Bay went on strike. At the time, then-dictator of the Philippines Ferdinand Marcos was expected to maintain a neutral stance and leave it up to the bases to resolve these conflicts. However, due to escalating tensions in other parts of Asia in 1979, Marcos changed his tone: he instead emphasized the importance of an alliance with the U.S. and ordered an end to what was reportedly the largest strike in the Philippines at the time.

As historic as that sounds, it was nowhere near the last strike to be held at those bases and has ultimately become just another footnote in the Philippines’ long, contentious relationship with foreign armed forces within its territory. The archipelago’s strategic position in the Pacific Ocean means that it had become an ideal place for American vessels to make a pit stop during World War II and the Vietnam War. This has led to a whole bunch of other problems—not the least of which is the continuing blight of an exploitative sex tourism industry in areas where soldiers would go on shore leave.

None of this is information that one necessarily needs to know to watch a film like Lupita Aquino-Kashiwahara’s Once a Moth (in Tagalog, Minsa’y Isang Gamu-Gamo) from 1976. In fact, the events of this film occur around the time of the Apollo 11 moon landing, a full decade before the strike. The film never makes any strong allusions toward Marcos’s martial law either, which the former president had enacted in 1972. Even if you watch it without specific knowledge about the Philippines, Once a Moth still works as a drama about a community in Pampanga trying to make a living and chasing their American dreams despite the danger that the foreign military puts them in. It’s an underdog story. 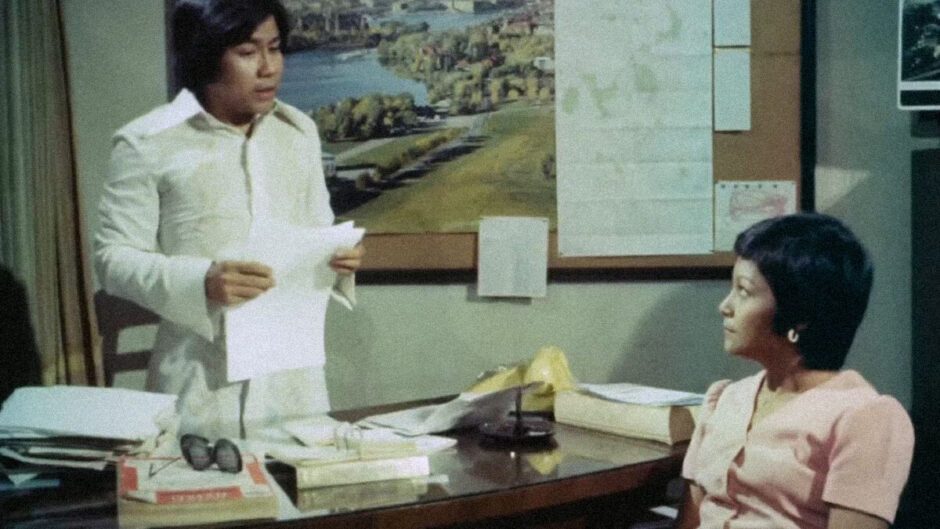 But I only wish I could view Once a Moth (or any Filipino film for that matter, especially those from the 1970s and ‘80s) inside a vacuum. I wish there wasn’t now this heightened urgency to look up news articles from five decades ago to illustrate how so many of these classic movies were, in fact, pointing a damning finger back at Marcos and how his murderous dictatorship only benefited his powerful allies. I wish I could endorse this film to an international audience simply on account of its remarkably well-rounded ensemble, Marina Feleo-Gonzales’ fearless screenplay, and Aquino-Kashiwahara’s powerful use of melodrama.

But the reality is that the dangerous, oppressive conditions under which films like Once a Moth were produced are looming once more in my country. And now, with the dictator’s son, Ferdinand “Bongbong” Marcos Jr., having newly won the presidency after a decades-spanning disinformation campaign to rewrite his family’s legacy of corruption as one of heroism, it only feels right to insist on writing about Philippine cinema as following in a tradition of protest and indignation.

While it’s true that Once a Moth doesn’t mention Marcos, its producers still undoubtedly wanted to be as careful as possible to ensure that the film would even be released. The story is that Nora Aunor was chosen to play the lead role of Cora, so that her friendship with the Marcoses would allow the film to get away with its heavy criticism of the Americans, with whom the former president was chummy. And even if this wasn’t exactly the case, it wouldn’t be hard to believe, seeing as how other landmark films from the martial law period had been subjected to Marcos’s censors.

For example, Lino Brocka’s social realist drama Insiang (co-restored by Martin Scorsese’s World Cinema Project) was almost stopped from being shown at the 1976 Cannes Film Festival. Former first lady Imelda Marcos thought that its depiction of real poverty in the Philippines contradicted the illusion of beauty and progress the Marcoses used to cover up the people’s suffering. In 1980, Ishmael Bernal’s Manila by Night encountered the same problem, with Imelda having it temporarily renamed City After Dark to distance the nation’s capital from the film’s depiction of outcasts and deviants in Manila’s seedy underbelly. In 1976 again, Behn Cervantes, the director of The Tenants (or Sakada), was arrested and copies of his film were seized after just three weeks in cinemas, due to the film’s unapologetic portrayal of farmers being mistreated by their wealthy landlords.

Any of these films stands as an act of protest against the Marcos regime, using specific instances of violence and inequality as a way to comment on the widespread violence and systemic inequality of martial law. But what Once a Moth helps add to the discussion is its portrayal of ordinary people in denial. That is, those who have the privilege of being able to turn a blind eye to the suffering around them, or those who have resigned themselves to the idea that injustice will always exist, so we might as well keep to ourselves and keep quiet.

In this regard, Once a Moth is unique because it isn’t a traditional story about characters solving a problem or getting what they want. The film doesn’t even have what you’d consider a “proper” climax and resolution. Instead, it’s a story about how, sooner or later, everyone who’s at the mercy of the rich and powerful will reach a point where they feel that enough is enough.

The reality is that the dangerous, oppressive conditions under which films like Once a Moth were produced are looming once more in my country.

In the film, Cora is preparing to work as a nurse in the U.S., in the hopes that she can eventually bring her mother, grandfather, and younger brother along with her. Cora’s boyfriend, Boni (Jay Ilagan), has plans of serving with the U.S. Navy, while his mother enjoys a job at the commissary of one of the military bases stationed in the Philippines. It isn’t a spoiler to say that, throughout the film, nothing technically stops these people from continuing their plans. But as things progress, more and more people surrounding Cora (but never Cora herself) become the victims of indiscriminate cruelty and violence.

What makes Feleo-Gonzales’ screenplay smarter, however, is that she doesn’t just bemoan “society” or blame her characters for allowing these things to happen around them. She knows better than to be spiteful toward the people who already have so little power on their own. So, contrary to what it may seem like at first, Once a Moth isn’t trying to punish its characters as it ramps up the tragedy. Instead, it wants to shake them awake to the truth that living in a world like this is unacceptable.

And when I say “world,” I don’t mean the Philippines. Once a Moth smartly defines its setting not by landmarks or geography, but by customs and social relations that have been organized around the presence of American soldiers. Conversations at home constantly revolve around American accomplishments. At the commissary, the English language is used as a tool to ingratiate oneself with foreigners. Children spend their time playing as American characters—or by braving the open fields to scavenge for scrap metal from the Americans, while getting shot at by passing fighter planes. Filipinos here only seem to exist in relation to Americans.

An argument could be made that this is all just too heavy-handed to be realistic. (Does any Filipino family really spend all their time talking about America?) But when the government refuses to even acknowledge the poverty of the majority, stating things as plainly as possible seems to be not only a deliberate artistic choice, but a necessary one as well. 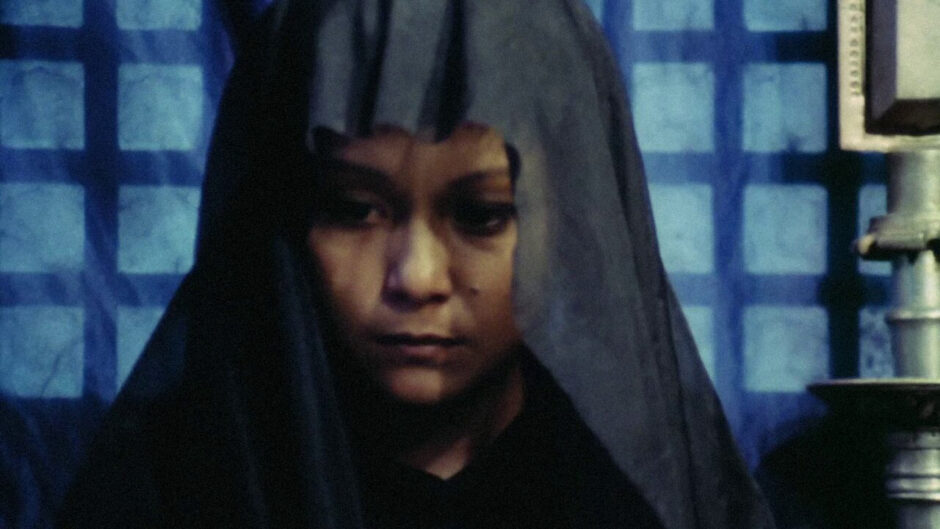 Besides, even without subtlety, Aquino-Kashiwahara’s direction never allows the drama to devolve into histrionics and cheap emotion. In the film’s most iconic scene, Cora, in a fit of rage, begins to repeatedly shout “My brother is not a pig!” at an American soldier, first in English, then in Tagalog. It’s not meant to be a very articulate speech. But Aquino-Kashiwahara takes this potentially over-the-top moment and makes it exactly as desperate as it needs to be, with Aunor’s impassioned performance transcending language.

The third-act incident that leads directly to the scene above is actually spoiled in synopses of Once a Moth on websites like IMDb and Letterboxd. But knowing what happens toward the end of the film doesn’t ruin the feeling of dread leading up to it. If anything, it only emphasizes the film’s belief that tragedy is inevitable. No doubt it’s how many people must have felt during Marcos’ dictatorship: might as well try to be safe in submission than protest against the powerful.

But if there’s anything that Once a Moth believes in even more, it’s that with the certainty of suffering comes the certainty that the pendulum will always swing back before long—just like the seemingly random act of karmic justice that closes the film. The Filipino people will push back. It’s in our nature; we’ve been doing it since we were colonized and we’ll do it for every new dictator that lies their way into office.