Bron LacsamanaI1.5.2023
Through the Olive Trees: To Pursue and Persist
In Abbas Kiarostami’s 1994 masterpiece, the Iranian director attempts to grasp some semblance of life, but never all of it.

Art is often seen as a reflection of life. In many instances, life becomes a reflection of art as well, especially these days when everything is a reference to something else. The various forms of media we consume try to mimic reality and our lives tend to be collages of things that inspire us.

It all seems cut and dry, but it isn’t. What happens in the in-between, in the attempt to imitate, in the search for truth? What can be found there?

That’s what the 1994 Iranian film Through the Olive Trees shows us. It’s about the making of a film, particularly scenes depicting newlyweds in a disaster-stricken place. But behind the scenes, they are a poor imitation of what might be—the “husband” is played by Hossein, a persistent suitor, and the “wife” is played by Tahereh, his seemingly unwilling object of affection.

The two are merely acting as a married couple for the film, which presents a premise chock-full of layers of what is real and what is just a reflection of reality. Though Hossein professes his love and dedication to a quiet and unmoved Tahereh in between takes, they assume the spitting image of young married life as soon as the director yells “action!” 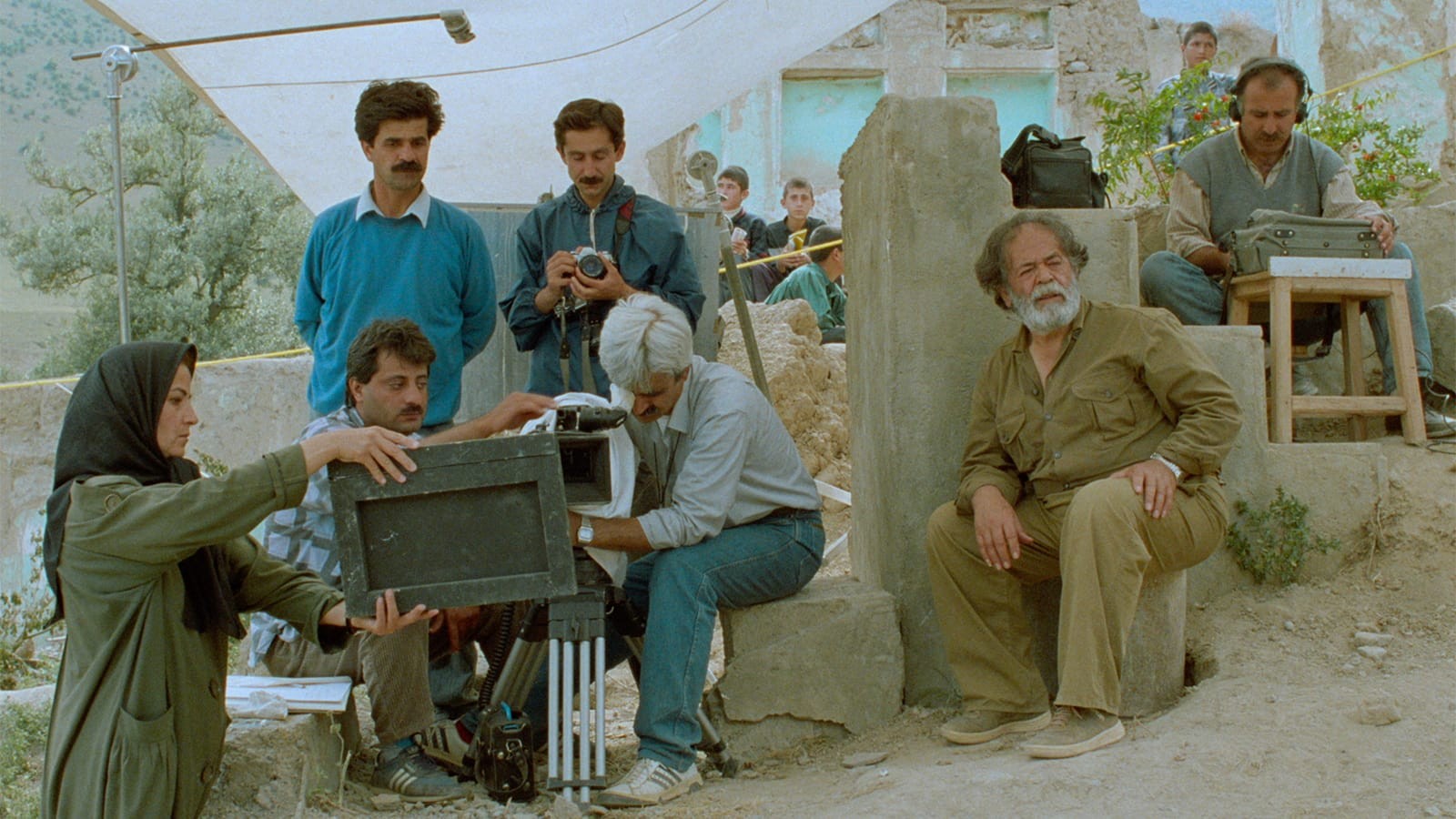 This layering of truths will come as no surprise to those who know the works of director Abbas Kiarostami (and the movement in Iranian cinema that he belongs to, which is playful with concepts of documentary and fiction). It’s a satisfying logical jump from the previous film that Through the Olive Trees follows in an unofficial trilogy, but not in the way you’d expect. Instead of being the end of a storyline that arches over three films, this is how it goes:

• Where is My Friend’s House? (the first one released in 1987) is about a schoolboy in Koker, Iran, who does an act of kindness for his classmate;

• Life, and Nothing More… (the second one released in 1992; also known as And Life Goes On) is a fictionalized telling of the director returning to Koker to check if the actors from the first film are alright after the events of the 1990 Manjil-Rudbar earthquake;

• Through the Olive Trees (the third one released in 1994) is a fictionalized behind-the-scenes look into the shooting of one scene in the second film.

The documentary style of Life, and Nothing More… (my personal favorite!) is able to show the enduring strength of the human spirit amidst hardship and tragedy, while Through the Olive Trees adds the question of whether we can replicate and emulate that strength, that sense of hope.

The naturalistic camerawork exemplifies this, allowing for a straightforward look into the chaotic yet homely film production that stands amidst the mountainous environment of Rudbar. Take one scene where a car travels through the countryside, shot from the first-person perspective of the camera in the vehicle. This road trip seems meandering, as it shows the long and winding journey and gives the impression of searching for something.

(I’m writing this draft on a notepad app on my laptop while I passively rewatch this exact scene on the other side of the screen, a dream pop track playing in the background. I’ve been trying to write this review for weeks in an attempt to discuss the film’s brilliance. Like Kiarostami, albeit in an inferior, cringey, “millennial” manner, I guess I’m also searching for something—)

To nail down a vision of truth in art, there are a lot of hurdles to overcome, Kiarostami tells us, particularly with film. It’s what the camera smoothly following the winding paths and sudden stops tells us—Tahereh is initially unwilling to wear an old-fashioned dress, a blockage in the road prevents the car from passing through to the set, the sensitive dynamics between Hossein and Tahereh halt production, a disagreement among crew members causes delays.

The truth that we seek to know and capture still seems unattainable, almost futile. But in the end, it’s beautifully given to us anyway.

The titular olive trees, while not a centerpiece or plot device in a scene, still feature prominently to indicate the lush surroundings. They thrive despite the earthquake that ravaged the area and evoke peace even while the crew faces obstacles.

Let’s peep one scene where the car drives through Rudbar, shot from the side of the vehicle so that the window frames the view of the mountains. The car stops and we see two boys emerge from a smattering of olive trees adorning the landscape. They approach, carrying flower pots from their homes that will be used to decorate the fictional newlyweds’ house on-set.

Here, Kiarostami neatly presents the conundrum of making art that reflects truth—these boys are natives to the area, lending authenticity, as they have lived and grown and studied in the midst of the olive trees. The flower pots they bring are from real local homes, yet they become props to be used for a fictional one. 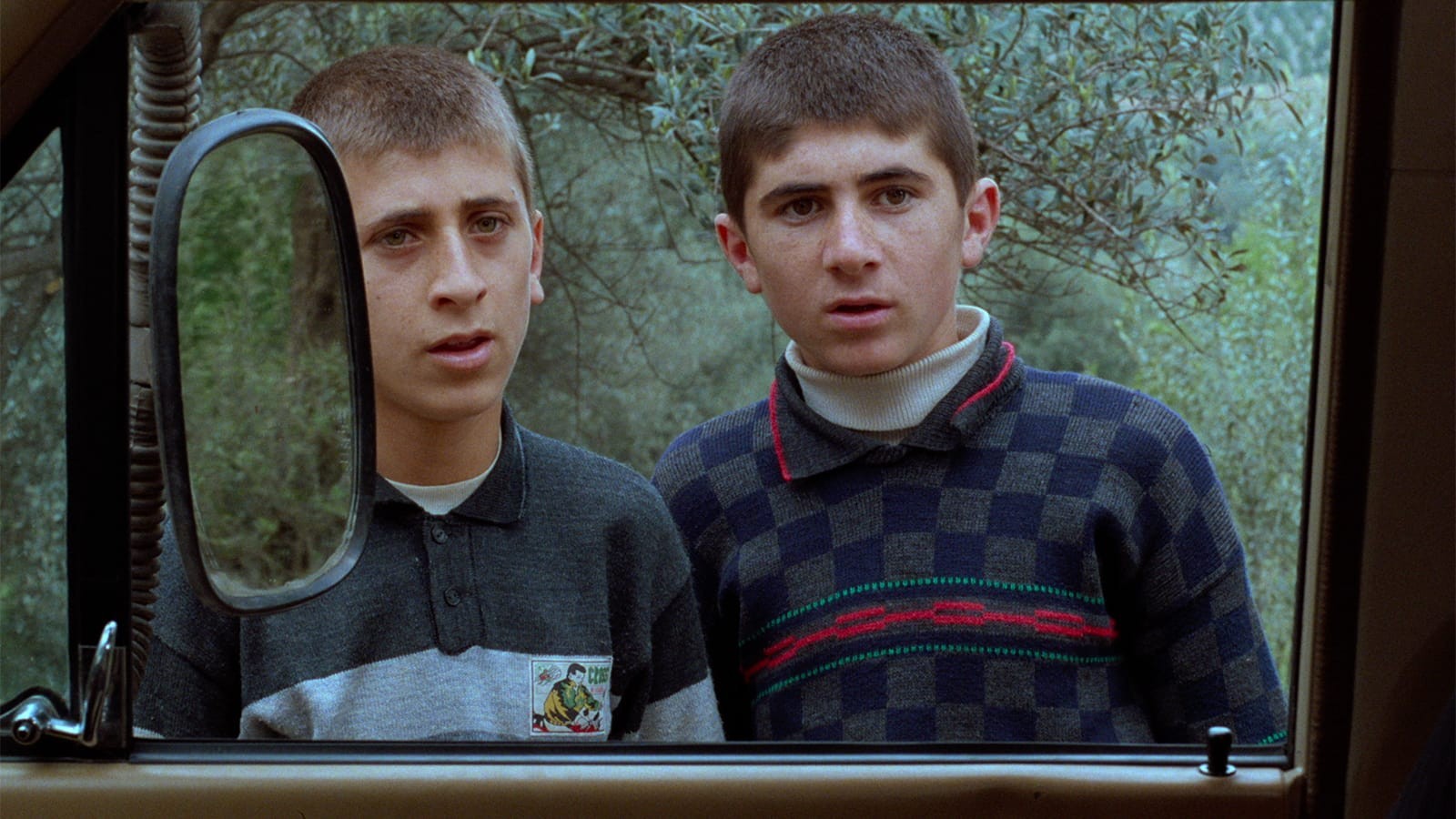 After all the journeying, the planning, the meetings, and taking in the real environment, the truth that we seek to know and capture still seems unattainable, almost futile. But in the end, it’s beautifully given to us anyway.

The character of Hossein, who relentlessly pursues and persists, finds out the truth about his fate with Tahereh and whether they’ll get married like their characters in the film. Art reflects life, sure, but it’s not that easy. The camera remains at the hilltop as Hossein runs through the olive trees towards Tahereh and finally gets a response. By then, the two leads are specks in the landscape of an extreme wide shot, and the camera and microphone are too far away to capture their words, their expressions, and the true conclusion of this saga.

Try as it might, no piece of writing can ever fully explain any concept of film or philosophy or art to a T. And in turn, art itself can only hope to grasp some semblance of life, but never all of it. Certainly never the whole story.