Taylor Leigh HarperI5.12.2022
The Worst Person in the World: What We Don’t Talk About When We Talk About Coming of Age
I find great comfort in what coming-of-age stories can do to observe and capture vulnerable youth. But what follows all that anticipated and feared change?

Growing up, coming of age books and movies were my polestar.

My broken-spine paperback of Are You There God? It’s Me, Margaret sat on top of my father’s handed-down copy of Great Expectations. My first favorite movie was Cameron Crowe’s Almost Famous, and was only recently usurped by Greta Gerwig’s Lady Bird. I reread Perks of Being a Wallflower while searching for Wikihows on “3 Ways to be Like Alaska Young.” I missed out on Harry Potter, but buckled down for the entire Hunger Games series, even as the writing progressively got worse. Near the end of high school—when everything I had known was changing, everyone I had learned to love was leaving, and nothing would ever be the same—I binged every project of the Brat Pack, and then sought out their ilk: Say Anything, Kiki’s Delivery Service, Stand By Me.

Even now, I’m drawn to the genre. I find great comfort in what coming-of-age stories can do to observe, articulate, and capture the terrible awkwardness and paralyzing loneliness and wonderful highs of friendships and crushing lows of first loves and embarrassing earnestness and vulnerable youth that’s ever ephemeral at the intersection of adolescence and young adulthood.

But what about afterward? What follows such great transformation, all that anticipated and feared and longed for change?

Maybe you get exactly what you want, or some similar shade of that next season of life.

But maybe it’s nothing at all like you thought you were promised.

Joachim Trier’s The Worst Person in the World examines this weird, liminal time and space, and introduces us to Julie over twelve chapters. In the prologue, we learn Julie is academically inclined, studying medicine because the exams are difficult. But then, as university students are wont to do, she changes her mind about what she’s really passionate about. She flirts with psychology and begins a relationship with one of her professors. Looking through pictures on her phone of them together, she realizes she’s actually meant to become a photographer.

Trier’s use of chapters—a motif I’m generally put off by, but here found natural—reflects how we narrativize our lives, blurring the divide between beginnings and ends in such arbitrary yet profoundly significant ways.

If this were a coming-of-age story, this would be our lesson: the world is our oyster. The possibilities are limitless. Once you are courageous enough to swim out to sea, weather a few tumultuous waves, you will know both the freedom of trying and failing as well as the joys of persisting toward the shore of what you really, actually, truly love.

But The Worst Person in the World isn’t a bildungsroman. Instead, Trier’s film might be considered a story about not just adulthood, but specifically, new adulthood in a technological anthropocene, where time is a novel promise and a dwindling commodity.

In the real world, Julie finds both independence and romantic relationships unsatisfying. Her serious partner, Aksel, is an older, successful comic book artist with older, stubborn opinions about creative freedom. Aksel’s craft is his life, until he finishes a project and looks up from his drawing board to ask Julie when she wants to start a family together.

Yet Julie—continuing to take photographs while working part-time in a bookshop and writing clickable feminist essays online—is barely a person at 30. She might still want to be a better photographer, or maybe even a writer, or something else entirely, before she becomes a wife and a mother, if ever.

Here is a Cruel, New Adult Truth: time is a luxury, just as much as it is a story. That there will be more. That there’s still some left. That what’s to come is enough to atone for, forgive, withstand, overcome, hold onto, fight for, or believe in what already has been. What once seemed like infinite possibilities are actually finite stories; the real possibilities are dwindling doors, steadily closing without necessarily opening more. Trier’s use of chapters—a motif I’m generally put off by, but here found natural—reflects how we narrativize our lives, blurring the divide between beginnings and ends in such arbitrary yet profoundly significant ways.

At a launch party for Aksel, Julie seems to take in her life and what possible doors remain open for her in this chapter. She leaves, taking the long way home, as if she might out-walk this shrinking feeling glossing over the evening. 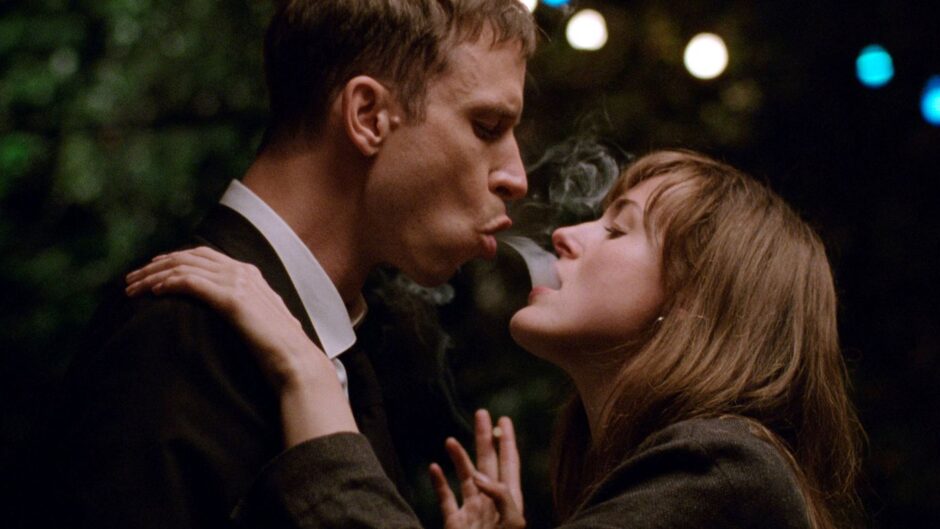 But then she comes across a stranger’s garden wedding reception. Crashing the party, she pretends to be someone she might have become earlier in her short life, like a coy, crass doctor. Julie catches the eye of a tall, dark, and handsome stranger, and they’re drawn together like primitive magnets.

They spend the night toeing the line between intimacy and cheating. They bite each other. They sniff each other’s sweat. They watch the other pee. But they don’t cheat, not exactly. They part at daybreak with no plans to meet again. Julie only learns the stranger’s first name, Eivind, so she can’t later find him on Facebook.

When I was in college, every party was the chance to become a kind of Cinderella. Any night could be when I’d transform into the cool, funny, and mysterious girl I’d wanted to be when I was younger. Acquaintances became confidants. Classmates became friends. Over beer pong and across stacks of red solo cups, our lives felt less stressful and we all became more interesting. And for Julie, this party, full of strangers well beyond university, is a fantasy where she can pretend for one night to be someone else, and almost be with someone else who could be anyone at all.

But then the morning comes, and life as it was resumes, even for Julie.

There are worse things in the world than being Julie: a healthy, sharp, beautiful woman with myriad interests, including medicine, psychology, literature, photography, and dancing. She’s the exact kind of confident, creative, and intelligent person I wanted to become when I wasn’t sure who I was going to be.

But Julie’s not just those things. She’s also a little lost, more indecisive than certain, impulsively flirty, quietly insecure, marching forward toward a moving target of greatness without a clear, set destination. When Eivind comes into her work, accompanying his environmentally-anxious, yogi girlfriend, Julie decides he’s a door she’ll step through more permanently, and see who she’ll become on the other side.

In arguably the film’s most magical sequence, Trier teeters between fact and fiction, suspending time while Julie contemplates ending her relationship with Askel. All of Oslo freezes except for Julie, who runs through the city toward the coffee shop where she’s learned Eivind works. She crosses the threshold from an emotional one-night stand into committed change, confessing her attraction to Eivind and kissing him in a park lit by a soft, dreamy pink dawn. Time resumes only when Julie returns to Askel, who she dumps over morning coffee and parts over one last intimate goodbye.

Askel doesn’t understand why Julie’s leaving. He tries a few angles, ranging from, “Are you in the right state of mind?” (Julie is) and “Do you know what you’re saying?” (Julie knows) to “You don’t know what you’re throwing away” (Julie does). While the answer may not have been satisfying, what Askel doesn’t ask is a more pressing, deeper truth: “Are you happy?” (Julie isn’t).

I was looking for women who weren’t happy with who they were yet, but put themselves on a path toward it. I thought I read between the lines that what was to come next, however hard-earned or delicate, was happiness.

When the pandemic began, I had recently turned 23, still in my early 20s. Now I am properly into my mid-20s. I am closer to turning 30 than I am being a teenager. Somehow, in isolation and remotely and while quarantining, I’ve come of age.

No coming of age stories, though, prepared me for how quickly the chapters change, the seasons turn over, time passes. At least, that’s not what I was looking for in my favorite books and movies. I was looking for women who weren’t happy with who they were yet, but put themselves on a path toward it. I thought I read between the lines that what was to come next, however hard-earned or delicate, was happiness.

Let me be clear—I am happier some days than I ever thought I could be when I was ten and awkward, twelve and uncomfortable, fifteen and miserable in high school. But I’ve also learned another Cruel, New Adult Truth: as temporary and poignant those adolescent feelings were, so too is any kind of happiness. No one wants to chase stability, though. It’s hard to make contentedness seem fantastic or alluring. I’ve rarely seen a story sell me on “just” being “OK” as being enough.

What we don’t talk about when we talk about coming of age is what comes after, that there is an after at all, and it can be as lonely and awkward and strange as growing up itself.

The Worst Person in the World is a glimpse into one kind of after growing up. And Trier gives us someone who has maybe never been certain, still isn’t content with what shape her life has taken, and yet still dares to seek out more.

Julie’s quest for more takes an unexpected turn in the penultimate chapter, when her relationship with Eivind leads to unwanted pregnancy, and a sudden illness enhances the fine point of mortality. The shift here feels narratively dramatic, yet resonant in the way that ordinary life is dramatic. Our loved ones get sick. We get great promotions at work. Climate change is debated, the tangible, immediate impacts are devastating, and yet we persist. We fuck up, again and again and again, and we get better at apologizing, and we try to be better. The future we have tomorrow is not one we could have even fantasized about a few years ago.

For Julie, her present is as mutable as the future. The past, though, is concrete and finite. Who she has been is who she worries might be the titular worst person, whether her lack of maternal instinct—or interpersonal indecision—or greater capacity for greatness than actual realized potential are her most damning qualities.

But Trier, in a tongue-in-cheek epilogue, grants Julie this loving open door: a chance to try being just OK. Her relationship with Eivind ends, and his life goes on. Her relationship with Askel ends, and her life goes on. She gives photography a more serious go, and returns to a brightly lit apartment to edit her work alone. Without an audience—no romantic partner, no strangers to impress, no distant family members—she smiles to herself, and maybe she’s happy, but more likely she’s content, at least for now.

After all, it’s the promise of life, it’s the joy in your heart, that ekes out the best in even the worst of us.