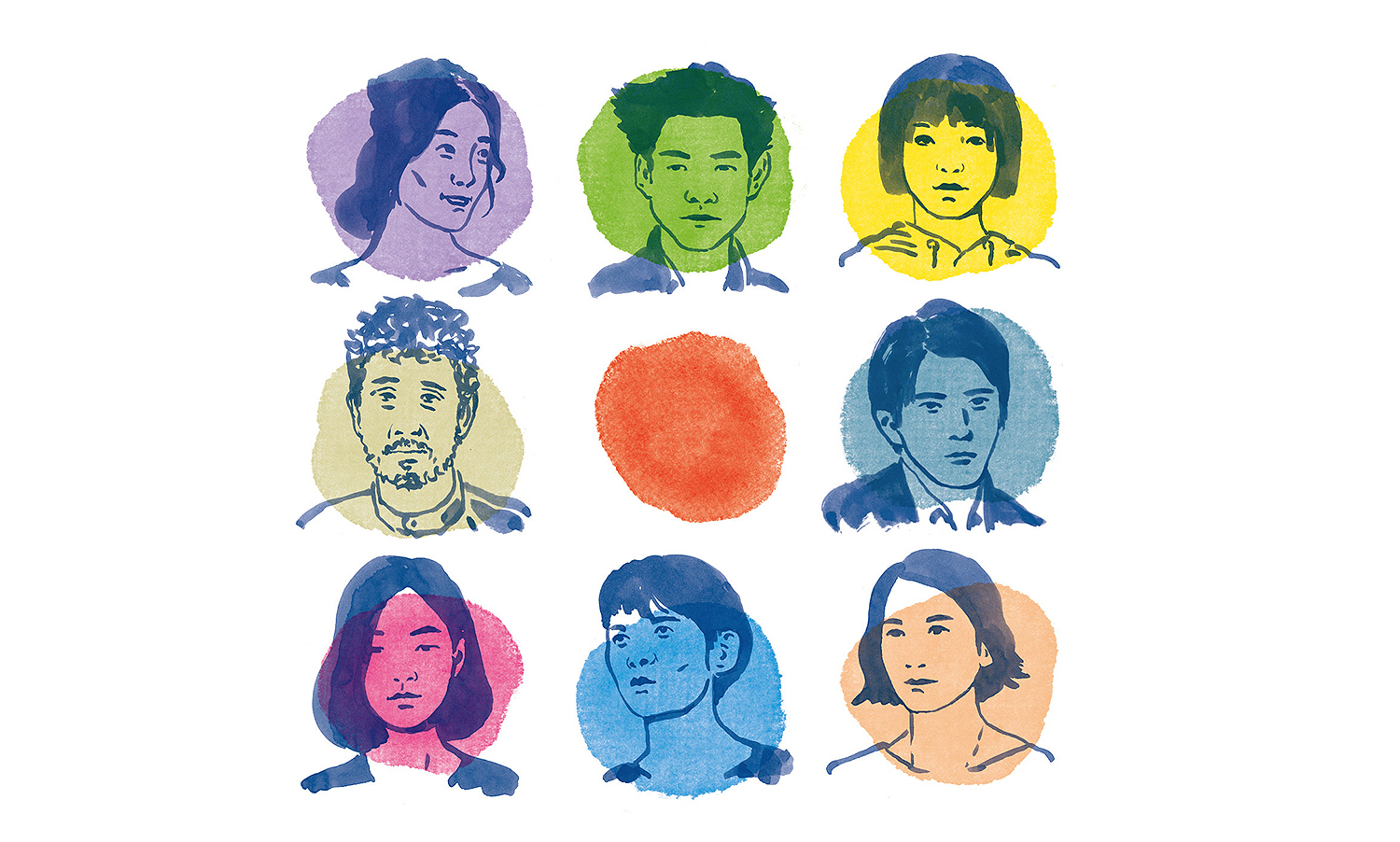 Renee CuisiaI6.9.2022
Wheel of Fortune and Fantasy and The Rise of Multiverse Dramas
It’s time we acknowledge that Marvel doesn’t have a monopoly on the multiverse.

“In another life, I would have really liked just doing laundry and taxes with you.”

So goes the viral line from Everything Everywhere All at Once, a triumph in multiverse and indie filmmaking, proof that cinema can simultaneously exist in popular and niche spaces, all while collecting its well-earned due.

Everything Everywhere All at Once was seemingly made to fly in the face of the MCU and DCEU; it achieved all the wonder these deep-pocketed franchises set out to inspire with eight times less their budget. It also reclaimed the time-and-space-hopping premise from their monopolistic hands, reminding viewers that it’s not only superheroes who can conjecture alternate universes: mere students, little kids, or in this case laundry attendants can be time travelers and reality benders as well.

But there is another film which I believe belongs in the same canon. It may not be as revolutionary or revelatory—in fact, it could be argued it does not fit at all. But it is a film that takes us to different and wondered worlds, where fate is not so much sealed as it is suggested, and fantasy is an ever-revolving door that invites us to step into its realm and imagine multiple outcomes of multiple events.

I’m talking, of course, about Ryusuke Hamaguchi’s Wheel of Fortune and Fantasy, little sister to the director’s more well-known film from the same year, Drive My Car. While Drive My Car won accolade after accolade, eventually claiming the top award in its category, Wheel of Fortune and Fantasy was inadvertently relegated to runner-up status, beloved by critics and moviegoers alike but lacking the one-two punch of other international hits that moved and marveled in big ways.

And that includes, as mentioned, all the multiverse blockbusters that have cropped up in recent years. Unlike them (and despite its title), Wheel of Fortune and Fantasy is not a “fantasy” movie in the traditional sense. It doesn’t employ the sci-fi elements usually reserved for multiverse storytelling, nor, as far as I know, has the director gone out and claimed it as such. It has widely been described as a film about coincidence, chance, imagination, and destiny, but not necessarily about the magic of those things.

However, as the titles of the three short stories that constitute it suggest, there is a hint of the fantastic rippling on the surface.

Part one is called “Magic (or Something Less Assuring),” part two is “Door Wide Open,” and part three is “Once Again.” In other words: illusion, portals, and reoccurrences. These concepts are so ingrained into the multiverse mythology, I couldn’t help but make the link. And the more ubiquitous talk of alternate realities became, the more I saw (for better or worse) Wheel of Fortune and Fantasy as part of that discussion.

In “Magic (or Something Less Assuring),” Meiko learns that by sheer chance, her good friend and her ex-boyfriend have started seeing each other. Jealousy creeps in, so much so that she inserts herself in their relationship: Meiko reunites with the boyfriend and sits in on one of their dates. She is playful at first, all arched eyebrows and twisted smiles, but her chaotic coyness comes to a head when she unleashes the truth. She lets her ex know she still loves him, she lets her then-oblivious friend know that they were former lovers, and she demands to know where she fits in all this.

It’s petty to make yourself the center of things, as Meiko does in this instance, but we quickly learn that it’s also just fantasy; an inward occurrence so desired, that it comes to life and blurs (both for Meiko and the viewers) the line between fiction and reality. There is now a world wherein Meiko bravely moves forward and a world where she continues to hide her emotions. And one is not “more real” than the other per se. Instead, they’re split ends of the same thread hanging midair, occasionally touching each other.

In “Door Wide Open,” something similar occurs: a student named Nao, coerced into seducing her professor, is eventually exposed and ruined for good. Regret then haunts her, as we see in part two’s epilogue. She leans fatigued on the bus window, her sad eyes betraying a clear thought: could life be better had she not made that life-altering mistake?

She attempts to regain a bit of control when she bumps into the man who set her up. Nao gives him a passionate kiss that throws off his overconfidence and for that brief moment, Nao gets a powerful sense of what could have been had she stood her ground that fateful day. She steps in, then out, of this world.

Finally, in “Once Again,” Natsuko attends a high school reunion and runs into a person who she mistakes for her ex-lover. She pours her heart out to her, and even when Natsuko finds out the woman is actually a stranger, they continue to role play anyway. Aya, her newfound friend, plays Natsuko’s ex, while Natsuko plays Aya’s former classmate, a strange young girl whose memory has followed Aya well into adulthood.

The two of them roll out a present in which past issues are resolved and future worries are squashed—a world of their own, as it were, shared in the small and sacred space between them. As they play the part of each other’s ghosts, it becomes clear they’re intoxicated by it. As any character who has dabbled in time travel knows, it’s such a convenient tool to forgive and forget.

Isn’t that what the multiverse is about? It’s a stand-in for all the chances and prospects we threw away or suppressed, all in the vain hope that we may live in a world that demands us to move forward in a linear fashion, with as less baggage as possible.

If you think about it—of if you’ll allow me to go on in this piece—Wheel of Fortune and Fantasy is simply a gentler entry in the multiverse genre. Like films of its kind, it dives into different but interconnected worlds, each of them bound by the all-too-haunting question: What If? And we see that question tackled in ways we’ve always wondered about but never had the heart to pursue, much less verbalize.

The grounded and understated way in which the multiverse unfolds in Wheel of Fortune and Fantasy makes it all the more realistic and palpable. More than just a fanciful concept far removed from our existence, outside of cinema’s four walls, it occurs here as part of everyday life. Whenever we decide to live in the space between past and present, between regret and actuality, we are creating our own entangled mesh of realities. Perhaps not as amazing, loud, or colorful as the others, but just as varied and imaginative to be sure.

Wheel of Fortune and Fantasy’s blockbuster counterparts like jumping from one world to another with exaggerated friction (often to excite rather than to genuinely challenge), and it does that too in its own intimate way. Here are our overlooked and fleeting and hidden thoughts, expanded and intertwined so that it looks like we’re watching our own fantasies onscreen—just endless, overlapping possibilities played out painfully and pleasurably, as they do in our heads.

Because stripped of all hype and flourish, isn’t that what the multiverse is about? It’s a stand-in for all the chances and prospects we threw away or suppressed, all in the vain hope that we may live in a world that demands us to move forward in a linear fashion, with as less baggage as possible. Films of this kind are often explosive because they reflect the relief artists and humans, in general, feel when given the space to explore all these overwhelming feelings and ideas. Cinematic expression, what with its lack of limits, operates as a sort of valve for existential tension.

But sometimes, the multiverse (or its metaphor, anyway) can exist ordinarily and plainly, without obvious fanfare or acknowledgment, as it does in Wheel of Fortune and Fantasy. Here and in films like it, we’re presented with realities where you could be happy doing laundry and taxes with the one you love—or, if you want, you could also be doing a multitude of other things, equally mundane and meaningful.