Scott WilsonI6.1.2022
Petite Maman: On Film Lullabies and Fairy Tales
Fairy tales for adults are like lullabies for children: at once devastating and comforting.

When writing about the ways in which feeling bittersweet makes us whole, Susan Cain came across a devastating notion. A Spanish poet had traveled his country, collecting its lullabies, and realized we use our saddest melodies to help our children sleep. Cain believes this is because we come into the world with a spiritual longing for home, and that beautiful home is out of reach.

Céline Sciamma is a filmmaker familiar with longing. Before Petite Maman, her universally beloved Portrait of a Lady on Fire sparkled with electricity between its two leads who knew their time together was short. That film resonates so deeply not just because of the love between Marianne and Héloïse, but also in knowing the sorrow that will follow when they part ways.

Her fifth full-length feature, Petite Maman, is a compact fairy tale told quietly over a few days in autumnal woodland. Eight-year-old Nelly’s maternal grandma has just passed away. While emptying her grandma’s house, Nelly’s mom disappears in the middle of the night without saying goodbye, upset by her loss. While her dad continues the work, Nelly heads out to play among the trees, coming across an almost identical girl called Marion. Played by twin sisters Joséphine and Gabrielle Sanz, the two quickly and comfortably bond. Marion, it seems, is her mother as a child, able to take Nelly home where her grandma is still alive and her house is still full.

Petite Maman exists entirely within the bittersweet, where every moment of joy is tinged with sadness.

Fairy tales for adults are as devastating as lullabies. In Pan’s Labyrinth, a child’s imagination cannot withstand the real-world horror of war. In Black Swan, the naïve pursuit of perfection comes at a cost. Although nowhere near as violent or as visceral, Petite Maman—which is rated U in the UK, meaning no parental guidance required—may be one of the most heartbreaking films I’ve ever seen. It exists entirely within the bittersweet, where every moment of joy is tinged with sadness.

Before she leaves unexpectedly, Nelly tells her mom she wishes she had said goodbye to her grandma; when they last spoke, she hadn’t said it properly. She had said it like she always had: casually, not final. She hadn’t known it would be the last time. At a young age, she is already coming to know there are some significant things that she cannot change. “If only…” is playing on her mind.

But what if we were able to do those last moments over? In young Marion’s world, Nelly can talk with her grandma again, where it’s revealed she is her namesake. She can be the little girl whose grandma fixes her tie while she’s getting dressed again. In this alternative reality, Nelly gets to experience something she thought she had lost forever. It is fleeting—she and her dad will finish emptying the house soon—but it is long enough to say goodbye and know it’s the last time. It might hurt more knowing what is to come, but you get the sense she finds some closure and peace. 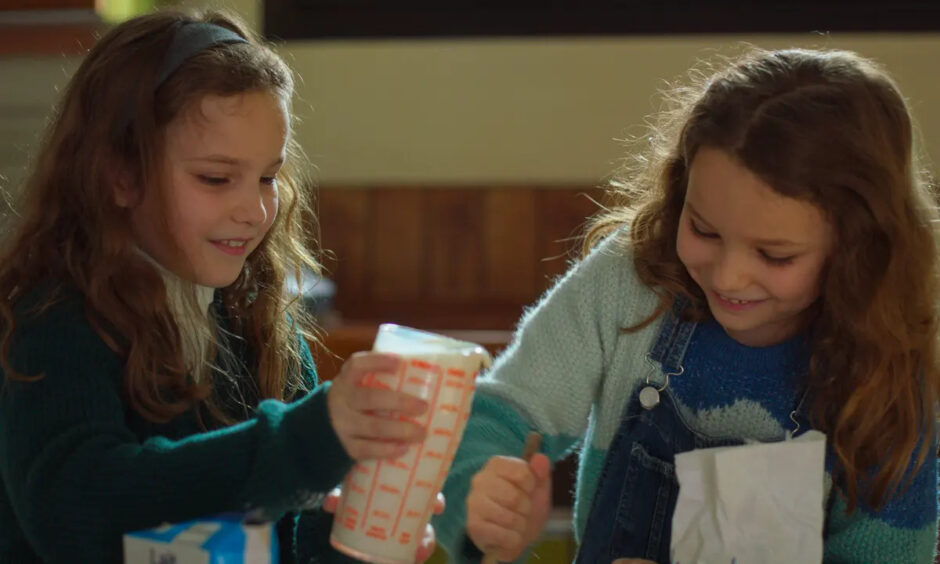 In Mike Mills’ 20th Century Women, Annette Bening’s Dorothea comes to accept she will never see her son (with whom she struggles to connect) the way his friends see him. In order to understand the most important person in her life in a way she never will, she wants something she can never have. Petite Maman takes that notion and turns it into a gentle fantasy. Take its title literally.

As a child, our parents are God. It’s only as we grow we come to know them as real people, flawed and imperfect, with worlds that existed before we were born and before they knew each other. Like Dorothea from the other side of the coin, we will never know how our parents were without us—when they were smaller, yet to fall in love, when they still had dreams. Young Marion tells Nelly she wants to be an actress, something which Nelly never knew, and that she knows Marion doesn’t become.

In turn, Nelly can give Marion a heads up about what’s to come.

In the film’s most moving conversation, the seeds of Marion’s adult life are shown to already be present in her as a child. Nelly tells her that, as a grown-up, she often isn’t happy to be around. Marion, seemingly aware of what she’s referring to, replies “You didn’t invent my sadness.”

In some ways, this gift of foresight is a privilege. Nelly is able to prepare her mom for what’s ahead. She takes her to meet her future husband, where she witnesses his love for their daughter. There is the promise of a life with a loving family. There is also the acceptance of melancholy being a constant presence.

Lying in bed on their final night together, young Marion tells Nelly, “I’m already thinking about you.” A profound bittersweet feeling hangs over their time together. Their relationship will never be like this again. They spend that last night making a mess of the kitchen baking pancakes like children, like sadness doesn’t exist.

As the film’s audience, we understand this is a relationship we will never know. But I imagine many of us long for it, like the way we found comfort in minor key lullabies as infants. We long to be able to provide comfort in return for people who spend their whole lives worrying about us. We are their little bundles of joy, who inevitably keep them awake at night worrying when we will be home, who misbehave, who don’t live up to expectations. Petite Maman invites us to imagine if, just for a day or two, we could forget about all of that.

What if we could just play together in the woods? What if.