Ruairí McCannI9.6.2022
Neptune Frost: ​​Gospel for a New Century
This Rwandan sci-fi musical weaves political liberation and the struggle for revolution right down into its DNA.

I lie there, looking up at the stars. I pick out some of the constellations and name the stars that make them up. I’ve learned them from an astronomy book that belonged to my father’s mother.

I see the sudden light streak of a meteor flashing westward across the sky. I stare after it, hoping to see another. Then my stepmother calls me and I go back to her.

“There are city lights now,” I say to her. “They don’t hide the stars.”

She shakes her head. “There aren’t anywhere near as many as there were. Kids today have no idea what a blaze of light cities used to be—and not that long ago.”

“The stars are free.” She shrugs. “I’d rather have the city lights back myself, the sooner the better. But we can afford the stars.” 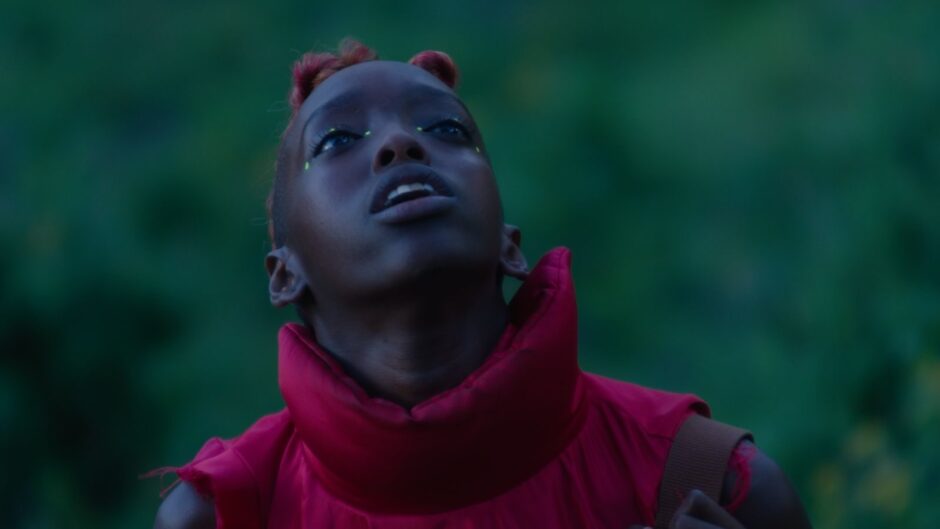 In his 1989 essay “Triangular Cinema, Breaking Toys and Dinknesh vs Lucy,” the trenchantly independent Ethiopian-American filmmaker Haile Gerima calls for a radical new African-American cinema, one that draws inspiration from some of the most militant and experimental instances of Third Cinema. He sought a type of filmmaking that is not only iconoclastic in its message but also in its mode, style, and all-around aesthetic. For Gerima, the aspiration was to seed “…an experiment that is grounded in a genuine and honest search for ways to express our essence, our temperament, and our accents in sight and sound.”

The idea of cinema as a radical enterprise—as not just a by-the-numbers vessel for progressive ideas but rather an all-around dissident aesthetic—suffuses Neptune Frost, a science-fiction musical written and directed by multi-hyphenate artists Anisia Uzeyman and Saul Williams. Here, Gerima’s so-called “triangular interaction” between “storyteller, audience, and activist” exists. And this interaction doesn’t just power the film’s making; it’s bound up in the guts and wiring of it. After all, Neptune Frost is a parable about the struggle for expression without chains. It shows us the difficulties of achieving unification among ethnicity, class, and gender while arguing that the fight for political liberation is inseparable from the forging of new aesthetic possibilities.

Borne out of a long, multi-disciplinary gestation, Neptune Frost was conceived by Uzeyman and Williams over a decade ago. It was then further developed, mid-decade, as part of a multi-work project called MartyrLoserKing. So far, along with this film, the project is comprised of two albums by Williams—MartyrLoserKing (2016) and Encrypted & Vulnerable (2019)—and a comic book coming down the line. Neptune Frost was originally intended to be a stage musical, but through some reconsideration, and with the help of a Kickstarter campaign, it became a movie. This was a fundamental and positive change since the film’s most speculative and abstract moments can be grounded and nurtured in a palpable feel for land and community.

The land in question is a near-future Burundi, ruled under the direct, repressive control of “The Authority,” who are, in turn, bolstered by a less direct yet equally totalitarian, capitalist, and neo-colonialist world order. Out of this dystopian fray, two individuals find themselves star-crossed and on the path to dissidence and potential liberation, with death and exodus serving as their catalysts.

Neptune Frost is a parable about the struggle for expression without chains. It shows us the difficulties of achieving unification among ethnicity, class, and gender while arguing that the fight for political liberation is inseparable from the forging of new aesthetic possibilities.

Neptune (played first by Elvis Ngabo, and then by Cheryl Isheja) is cast adrift by the passing of their aunt at the hands of an abusive priest, while Matalusa (Kaya Free), a coltan miner, flees after a foreman casually murders his bellwether of a brother, Tekno.

In the depths of despair and dejection, on the lam from their shackled and broken communities, they stumble upon a vision: a techno-cosmic dream space presided over by a kind of extra-terrestrial guardian angel (Eric Ngangare), the scion of a binary star. This leaves them spiritually, politically, and in Neptune’s case, physically, transformed. Eventually, they will meet at a militant commune of anti-colonialist hackers. The place is also populated by miners, students, and others left free-floating by power.

This is an accurate summary, but it’s also too neat for a film that moves like a ripple of interlacing and purposely frayed threads. Clear narrative progression and detail are often evinced in favor of the talismanic import of recurring images and movements, along with the flow of music.

The latter is constant, like a river pressing forward in great deluges, or rather, elaborate set pieces. More often than not though, the music is a quotidian and commentating presence; an eddying medley of tunes piping out from little futuristic mobiles—a world of surveillance, and of its ground-up re-appropriation—casually sung and floating in and out as embodiments of the characters’ individual and collective emotional states.

Both the big numbers and motifs are largely taken and remixed from Williams’ last two albums. They are a collection of futuristic and psychedelic rap and R&B, genres that draw overtly from centuries’ worth of musical traditions fostered between the United States and Sub-Saharan Africa—from intore dance to jazz, from Sufism to outer space, and from a treasure trove of different vessels and imagery of transcendence. I found the film’s reworked versions of these songs to be more engaging than those from previous records and released companions, mainly because of the dynamism resulting from the replacement of Williams’s dominating voice with multiple other voices, which in turn cover many ranges, textures, and languages.

The lingua franca of Swahili, English, and French are used in the film, but the languages spoken and heard the most are Kirundi (the dominant language in Burundi, where the movie is set) and Kinyarwanda (the dominant language in Rwanda, where it was filmed). Unlike the other languages, these two don’t have colonial interests and enforcement to thank for their continued survival. And they drive the dialogue in this film, which is often overtly poetic and empowering. For example, the key recurring line is the greeting “unanimous goldmine,” a reappropriation of that often-blood-soaked site of unequal wealth and power, leveraged to something more down-to-earth: a binding expression of love and solidarity. 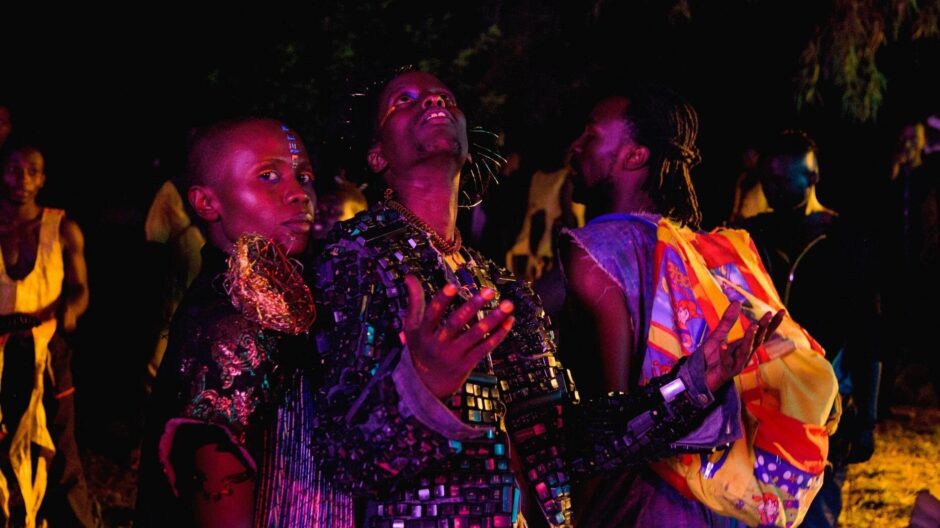 The decision to film in Rwanda instead of on location in Burundi—and the subsequent mix of Burundians and Rwandans in the cast and crew—was motivated in part by necessity. From 2015 to the time of production, Burundi had been in a state of violent upheaval stemming from fixed elections and inter-ethnic tensions. So the two countries’ intermeshing of sounds, images, languages, and peoples has led to a profound interaction between colonialism’s violent and ongoing legacy and the film’s call for truly egalitarian intercommunal communication and self-determination.

Known as “‘Ruanda-Urundi” in 1916, Rwanda and Burundi were the earliest victims of the New Imperialism era. European powers plundered the region years before during the 19th century, and they arguably continue to rule today in the 21st century. Instability and inequity produced a monstrous system of ethnic distinction and colonial hierarchy, which in turn contributed to crises like the Rwandan genocide and Burundian unrest.

Neptune Frost offers up a creative counter to this status quo of schisms and impoverishment behind and in front of the camera. This is made apparent in the film’s casting of displaced and native artists-activists alone, but it also surfaces in minute details, such as the coltan miners’ close identification with their trade despite its bloody injustices. The latter speaks to a working-class inclination to find self-definition and solidarity both through and against one’s own lot. It’s an enriching fusion of flesh, tools, technology, and togetherness, which runs in contrast to those pure “lilies of the field” that “neither toil nor spin.”

A scene where Neptune finds momentary refuge in a convent that is headed by an old family friend (played by the great Rwandan singer Cécile Kayirebw) is a particularly tender point of connection between one generation and another, and an attempt at reconciliation between Catholicism and genderqueer identity. Outside specific moments and qualities, the costumes (by the deeply gifted Cedric Mizero) and the art and production design (credited to Mizero, Uzeyman, and Antoine Nshimiyimana) are a heady mix of cyberpunk DIY, traditional and ultramodern dress, and façade; the past, present, and visionary future intermingled.

The final note, however, is less utopian or hopeful. After a climactic and galvanizing bloc party, an eerie, low ebb starts to creep into the community and the film itself. This slack could be pinned to Uzeyman and Williams having difficulty steering the film to a close, but it could also be an expression of the quandary faced by revolutionary groups. How do you press on towards a better world when the will is strong but the resources are limited, and the wolves are right at the door?

It’s somewhat summed up in the scene where the rebel collective hash things out. One member suggests that direct action should expand from subversive messaging and societal isolation to the jeopardization of weapon sales and offshore accounts. Another member argues that the state and its allies will crack down on them if they take their separatism to the next step. But the rub is that the powers that be will always crack down on any form of insubordination, be it violent or passive. And for Uzeyman and Williams, it’s not enough to craft rebellious images. They fight power in its own image and square up to it directly—full-on and stoic.