Celia MattisonI10.4.2022
The Enduring Filth of Seven Beauties
The Oscar-nominated film remains underseen, but it endures today as a portrait of the grotesque that exists in every society.

Seven Beauties was a critical sensation in 1975, earning four Oscar nominations that it would not win. Some of the other movies nominated the same year are household names, even to the most casual movie-goer: Taxi Driver, Network, All the President’s Men, Carrie were all celebrated that year. Seven Beauties shares a lot of similarities with the canon of great filmmaking of the 1970s: it’s a gritty, grotesque movie about the lengths of human depravity with a distinct voice thanks to an auteur director. Separating Seven Beauties from most of that body of work is that it was directed by a woman, Lina Wertmüller.

Wertmüller was the first woman to be nominated for the Academy Award for Best Director and would remain the only woman until Jane Campion in 1994 for The Piano. A woman wouldn’t actually win until 2010 (Kathryn Bigelow, for The Hurt Locker) and while this isn’t that surprising when you look at the history of filmmaking, it becomes infuriating when you watch Seven Beauties and think about all the potential great work we could have had from other women who were excluded from the canon.

This era of film is consumed by male antiheroes but Seven Beauties’ Pasqualino, played by Giancarlo Giannini, is in a class of his own. As the only boy in a family of seven unattractive and therefore unmarriable sisters, Pasqualino takes family honor very seriously. When we first meet him, he is lit in red, his face severed in shadow by his large hat, smoke billowing out of his nose as he bites on his cigarette holder. His deviousness is apparent immediately, as is his artificiality. This is a man who has constructed a braggadocious image, who thinks he’s a gangster and a patriarch despite all evidence to the contrary. In his immaculately pressed but hilariously oversized white suit, he swaggers and sneers throughout 1940s Naples, flirting with every attractive young woman (and sometimes, young girls) he sees. They are too naive to know what we know, that this is a man with a deeply held but extremely fragile self-image. It’s his attempt to defend that image that sets the film’s events into motion. 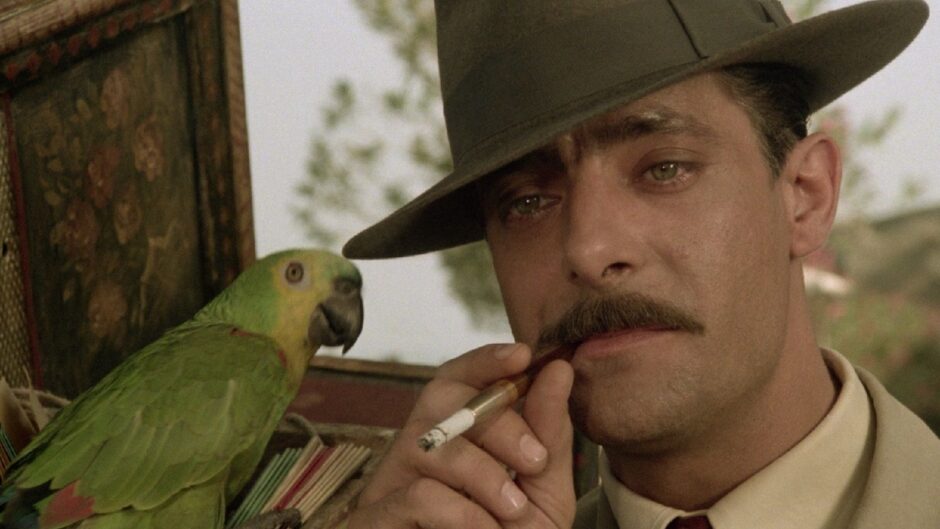 When one of Pasqualino’s sisters is seduced into becoming a prostitute by a pimp who claims he will marry her, Pasqualino flies into a rage. When the man calls him a worm and knocks him out, it’s then that Pasqualino vows revenge. He goes to murder the man and plans to make it look like self-defense, but accidentally fires his gun early and kills him. Unsure of what to do with the body, he butchers him messily and puts him in three different suitcases. He stumbles comically through Naples as he attempts to dispose of the body, only to be immediately caught and arrested. To avoid execution, he is sent to a psych ward, where he rapes a female patient. To avoid further punishment, he volunteers for the army, which he deserts, and then is captured by German soldiers and forced into a concentration camp.

Up until the concentration camp, the movie is otherwise absurdly lush, resplendent with shimmering mandolins. Now in the camp, Pasqualino is gaunt and hungry, his eyes have become as gray as his hair. In his desperation to survive, Pasqualino attempts to seduce the vicious female prison guard, who only further degrades him. When the war ends, Pasqualino returns to Naples. All of his sisters, his fiancée, and his mother have become prostitutes for American soldiers to survive the war. The murder he committed at the beginning to preserve his family’s honor, which set off this horrific chain of events, was for nothing. The forces of the world around him were much bigger than what he could control.

Speaking to critic Carlo Lizzani as part of a Koch Lorber remaster, Wertmüller describes Seven Beauties as an “odyssey of horror,” saying, “with every attempt he makes to get out, he gets pulled deeper into a web.” Roger Ebert, in a four-star review, wrote, “Seven Beauties isn’t the account of a man’s fall from dignity, because Pasqualino never had any—and that’s what makes it intriguing.” It’s Pasqualino’s exact lack of dignity that allows him to survive.

When he and his fellow deserter see Nazi guards massacring a group of Jews, the other man says they should have interfered, that in witnessing this violence they have become accomplices. Pasqualino denies it but the man continues, “It wouldn’t have been useless, because in the face of certain things you’ve got to say no, and instead I said yes to Mussolini, to duty, and all that crap.” Pasqualino is right that it would have been suicide to attempt to interfere, but he’s convinced himself that his lack of empathy is intelligence. He has deluded himself into thinking his selfishness and cruelty are savvy, that being practical means only thinking of one’s self.

For Wertmüller, there was value in graphically confronting the grotesque–especially in sexual violence.

Pasqualino is an interrogation of Italian machismo, a subject Wertmüller addresses in many of her films. He is a man with no ideals, only hunger; as he himself says, “Politics are boring, I have other interests,” a reflection both of his vapidity and the ultimately pointless exercise of attempting free expression in Fascist Italy. Ironically, the same cunning selfishness that leads him on this odyssey is what will allow him to survive the camp and get him back to Naples. The men who have beliefs, who speak up against injustice, are the ones who die brutally. The closest thing Pasqualino has to an ideology is his misogyny. His sisters serve and obey him, fetching his morning coffee and a fresh carnation for his lapel as he primps in the mirror, greasing his hair with a comb in each hand. When he isn’t able to dominate the women he feels entitled to, he assaults them.

Assault is a recurring theme in Wertmüller’s movies and she was often criticized for her gratuitous rape scenes. For Wertmüller, there was value in graphically confronting the grotesque–especially in sexual violence. To even call the scene between Pasqualino and the Nazi prison guard a seduction grants him an agency he doesn’t have; this is a complete and conscious victimization of a man who is being slowly starved and tortured to death. The commandant (a terrifying Shirley Stoler) recognizes that men like Pasqualino, men with no ideals but willpower, are ultimately the ones that prosper. Knowing she cannot break him, she rapes him, and resolves to make him suffer further by forcing him to choose six men to execute.

This scene, where Giannini tells the commandant that he loves her, is the climax of Pasqualino’s journey, Giannini’s masterful performance, and Wertmüller’s brutal, brilliant direction. Giannini recounts doing multiple takes with Wertmüller, each with a distinct and different emotional core—one comic, one despairing, one manic—and Wertmuller stitched multiple takes together. It’s not a novel editing technique but it has a tremendous and strangely seamless effect. At moments during the “seduction,” you wonder if Pasqualino has actually convinced himself of this attraction out of desperation. If perhaps he has truly lost his mind or if he was ever that stable to begin with. Giannini’s face is acrobatic in its pliability, contorting with heightened expression. This is a man we’ve seen gaze at himself in the mirror; in some ways, he’s always been performing. 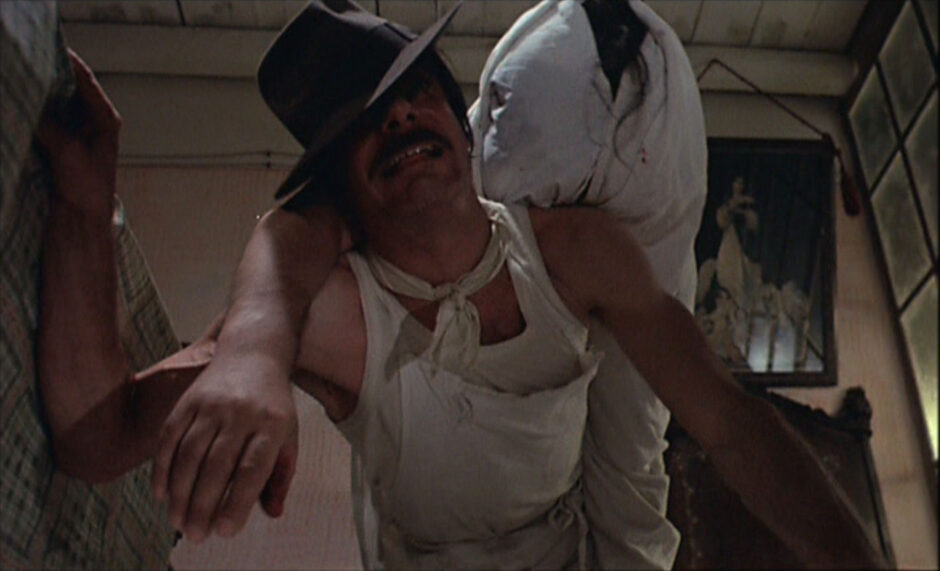 It’s an astonishing feat of acting—Giannini plays Pasqualino as pathetic and reprehensible but still self-aware and extremely compelling. His movements seem learned, as though he’s been studying more impressive gangsters to mimic their techniques of intimidation. Through his movements, we understand how much Pasqualino has bought into his image as an irresistible rogue, even as Giannini’s physical comedy skills undermine his braggadocio. He’s so well convinced of his machismo that he doesn’t realize how powerless he actually is, not only against the forces of war but just against other, stronger men. It’s these adaptations, his “thirst for life” as the commandant puts it, that have kept him alive.

The final moments of the film see Pasqualino not exactly as a changed man, but perhaps a tempered one. He has accepted the brutality one must endure, and sometimes commit, to survive—though his distant gaze indicates he clearly has not moved past it. And his vow to have as many children as possible, to build his own biological army that can protect each other, is his acceptance of his ultimate powerlessness in the world. He has seen the worst of human cruelty and has no hope that it can be solved, only that one can protect themselves from it.

Seven Beauties is more than a masterpiece of ‘70s filmmaking; it’s an exceptional portrait of the grotesque that exists in every society. It is an enduring work about despair and desperation, and the people who cannot get to the other side—“the ones who are in garbage up to here,” as the film’s opening manifesto states. Though filmmakers as diverse as Martin Scorsese and Amy Heckerling have acknowledged its tremendous influence on their work, it remains tragically underseen. But Seven Beauties is a painful, startling reflection of how easily a society accepts and breeds cruelty, and how it’s not always the heroes who survive. In a film obsessed with hopelessness, it’s the psychiatric doctor’s analysis of Pasqualino that seems most condemning—itself a microcosm of the persistence of violence and violent men in our society: “Though you’ve done terrible things, you’re normal.”